Adhir Ranjan Chowdhury, referred to President Droupadi Murmu as 'Rashtrapatni' while sitting on a protest inside the Parliament complex 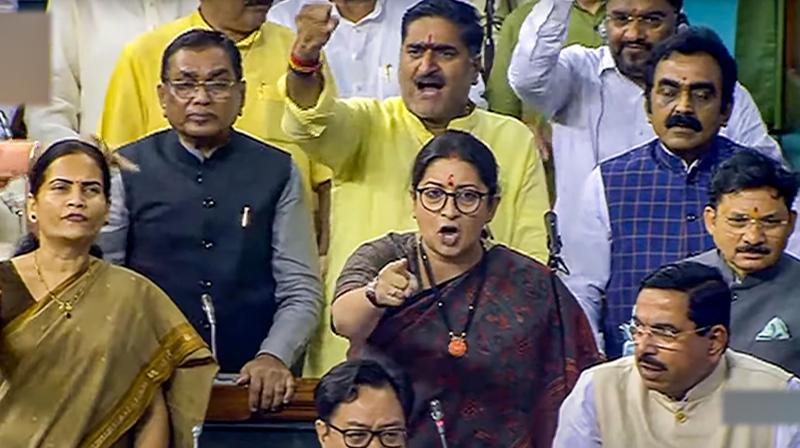 New Delhi: Congress president Sonia Gandhi and BJP leader and Union minister Smriti Irani were engaged in a fairly unprecedented face-off on the floor of the Lok Sabha on Thursday. The incident took place as the Lower House was adjourned at 12 noon. While the BJP has alleged the Congress president was rude to its MP and of “speaking in a threatening tone”, the Congress has accused BJP MPs of subjecting Mrs Gandhi to “brutal heckling, verbal assault and physical intimidation”, and demanded an apology from Prime Minister Narendra Modi.

Before the adjournment, Congress MPs, including Sonia Gandhi, faced sharp criticism from the treasury benches over the controversial remark by Congress MP Adhir Ranjan Chowdhury, who had referred to President Droupadi Murmu as “Rashtrapatni” while sitting on a protest inside the Parliament complex on Wednesday. This evoked sharp reactions from the BJP who felt using such a word for the President was highly derogatory.

While Mr Chowdhury apologised for the remark, saying that it was a slip of the tongue and blamed it on his poor knowledge of Hindi, and has sought time to go and apologise to the President personally, parliamentary affairs minister Pralhad Joshi and BJP women members demanded an apology from Sonia Gandhi as well.

As the Lok Sabha was adjourned in the afternoon, Mrs Gandhi walked across to the treasury benches and sought to know from BJP member Rama Devi why she was being dragged into the issue. Ms Rama Devi told the media later that Mrs Gandhi sought to know why her name was being dragged into the issue. “What is my fault?” Mrs Gandhi asked Ms Rama Devi, who said her fault was that she had selected Mr Chowdhury as the Congress leader in the Lok Sabha.

As the duo were talking, a group of BJP women MPs including Ms Irani reportedly shouted at Sonia Gandhi saying that she should also apologise for the remarks against the President. At this point, Mrs Gandhi told Ms Irani not to speak to her. As BJP members started flocking around Rama Devi and Sonia Gandhi, NCP member Supriya Sule and Trinamul member Aparupa Poddar escorted Mrs Gandhi away.

Later, Treinamul MP Mahua Moitra said the 75-year-old Congress leader was being “encircled and heckled pack-wolf style” by the BJP MPs. “(I) was in Lok Sabha when 75-year-old lady senior leader encircled and heckled pack-wolf style when all she did was walk over and speak (masked) to another senior lady panel chairperson. Disgusted to read the BJP lies and false version in the press,” Ms Moitra tweeted.

Finance minister Nirmala Sitharaman told the media that Mrs Gandhi was speaking in a “threatening tone” with the BJP members. Ms Sitharaman claimed that Sonia Gandhi told the BJP members “you don’t talk to me”, when they sought to know what the issue being discussed was. “Instead of tendering an apology, she is misleading by claiming that Adhir Chowdhury has already apologised. Instead of an apology, she is resorting to threats,” Ms Sitharaman said, referring to the incident in the Lok Sabha chamber.

Hitting back, Congress leader Jairam Ramesh termed Ms Irani’s behaviour as “outrageous”. The AICC general secretary added: “Atrocious and outrageous behaviour by Union minister Smriti Irani in the Lok Sabha today! But will she be pulled up by the Speaker? Are the rules only meant for the Opposition?”

“The brutal heckling, verbal assault and physical intimidation of one of the most dignified ladies of Indian politics, Smt Sonia Gandhi, inside by the BJP was traumatic and sickening. That this assault by the BJP MPs took place inside Parliament reflected the mentality of a mob,” said Congress MP Gaurav Gogoi.

“The BJP thought Sonia Gandhi would get scared and leave, but being the fearless leader she is, she went up to those women MPs and wanted to speak to them in a very dignified way, but that was met with very abhorrent behaviour from BJP MPs and we saw that women and male MPs and ministers surrounded her and created an atmosphere where she could have been shoved and could have been hurt,” Mr Gogoi added.

“Women and male MPs of the BJP made objectionable remarks against Sonia Gandhi and their behaviour was objectionable as well. This shows that the party which raises slogans in the name of women and culture has shown how they disrespected an Indian woman and tried to hurt her honour,” he said.

The Congress is approaching the Lok Sabha Speaker to complain against the BJP MPs and ministers who were present in the confrontation with the Congress president, and want the matter sent to the privileges committee and the video footage of the incident to be inspected.

Earlier, Ms Nirmala Sitharaman also raised the issue in the House and demanded an apology from the Congress president for the remark. “Chowdhury’s comments were not a slip of the tongue. It was a deliberate sexist insult against the President,” Ms Sitharaman said, adding that at a time when the entire country is rejoicing at the election of a self-made woman from a tribal background as President, “for the Leader of the Opposition in the Lok Sabha to call her ‘rashtrapatni’ in a ‘pati-patni’ (husband-wife) kind of a level has insulted the President of India. I demand an apology from the president of the Congress Party who herself is a woman,” she said.