DMK leaders Stalin, Kanimozhi and some others had gone to Delhi to pay homage to Atal Bihari Vajpayee. 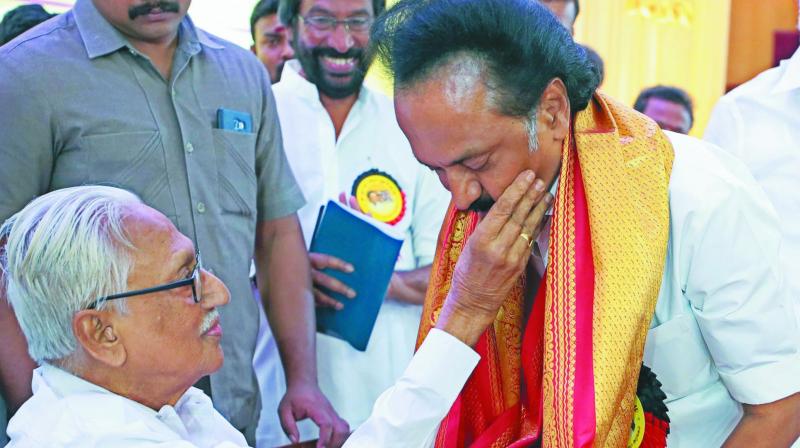 Chennai: M. K. Stalin was on Tuesday elected, unanimously, as the president of the DMK, taking over the reins of the state’s main opposition party that his father M. Karunanidhi had led unchallenged for about five decades. Not a mention, not even a whisper, was heard in the packed general council session at the party headquarters, Anna Arivalayam, about the ‘robust’ challenge thrown by his elder brother Alagiri to his leadership.

The elevation of Mr Stalin from the position of the party’s working president, which was given to him by Karunanidhi early January last year when his health started its downslide, was announced by DMK general secretary K. Anbazhagan, who said the election was unopposed as no one else had filed nomination. Same was the case in the election of party senior Durai Murugan as the treasurer.

In his acceptance speech, Stalin exhorted the party cadres to join him in to teach a lesson to the BJP government at the Centre, accusing it of saffronising the country. “The Narendra Modi government is trying to paint the nation in saffron colour. Let us teach it a lesson,” he said.

Mr Stalin’s attack on the BJP could well mean an end to the speculation if the DMK was cosying up to the saffron party and all those recent happenings that caused big excitement pointing to such alliance could well be just ‘political courtesies’—events such as PM Modi flying down to pay last respects to Karunanidhi at Rajaji Hall on August 7 and earlier, President Ramnath Kovind, Vice-President M Venkaiah Naidu and defence minister Nirmala Sitharaman visiting the hospital when DMK patriarch was critical.

DMK leaders Stalin, Kanimozhi and some others had gone to Delhi to pay homage to Atal Bihari Vajpayee. Also, the Centre declaring national mourning as a mark of respect for Karunanidhi and according state funeral, besides adjournment of both Houses of Parliament were all seen as signs of the two rivals edging close.