The programme aims to encourage all citizens to inculcate a culture of fitness. 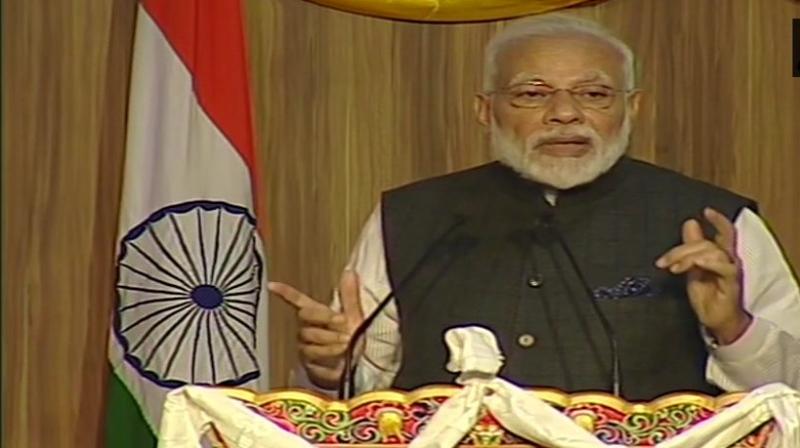 New Delhi: On the occasion of National Sports Day, Prime Minister Narendra Modi on Thursday launched “Fit India Movement” at the Indira Gandhi Indoor Stadium here, saying the initiative is the need of the hour and will take the country towards a healthier future.

At a colourful ceremony, which included a presentation of India's indigenous martial art forms, dances and sports, Modi said technology has contributed to a sedentary lifestyle.

"Fitness has always been an integral part of our culture. But there is indifference towards fitness issues now. A few decades back, a normal person would walk 8-10km in a day, do cycling or run," Modi said at the event.

"But with technology, physical activity has reduced. We walk less now and the same technology tells us that we are not walking enough," he added.

The Prime Minister also administer a fitness pledge in his address, inviting all Indians to join in.

The launch was also attended by Sports Minister Kiren Rijiju and this year's National Sports Awards winners among others.

"We will take this movement to new heights with the cooperation of my fellow Indians. I am so glad that this movement is being launched on the birth anniversary of Major Dhyan Chand, our hockey wizard," Rijiju said at the launch.

The Prime Minister congratulated the winners of the national sports awards and lauded India's sporting achievements. "Be it boxing, badminton, tennis or any sport, our athletes are giving new wings to our aspirations. Their medals are not just a result of their hard work but also a reflection of a new India's confidence," he said.

The programme aims to encourage all citizens to inculcate a culture of fitness.

Encouraging followers to take out some time everyday to stay fit, P V Sindhu in a video released by Sports Authority of India on August 27 said, “I am taking the pledge, are you guys ready to take the pledge.

The Prime Minister had announced the launch of the campaign during his monthly radio address, “Mann Ki Baat” on August 25 and said he wanted to see his listeners fit and make them “fitness conscious”. He had indicated that the fitness programme will have fixed goals.

Arrangements have been made for wide viewing of the launch; University Grants Commission (UGC) has asked affiliated higher educational institutes to make arrangements for live viewing of the event by the students, faculty and staff

Institutes have also been instructed to prepare and implement an institutional fitness plan incorporating sports/exercises/physical activities for fitness, into the daily routine. UGC has also asked institutes to encourage every person to walk 10,000 steps on Thursday.

Institutes have also been told to upload their fitness action plans on UGC’s “Fit India Movement Portal” which is under development.

Union Sports Minister Kiren Rijiju said the Prime Minister’s initiative was receiving support from all sections of the society.

“Tremendous supporters are coming from all sections of the society to participate in the #FitIndiaMovement to be launched by @narendramodi ji on 29th Aug at 10am,” said the minister.

As PM @narendramodi ji is launching #FitIndiaMovement at 10am, I'm extremely excited to see Chief Ministers making clarion call to citizens in their respective States for fitness. Here is the message of the CM of Tripura @BjpBiplab ji. https://t.co/hfBPb3kjmc

Chief Ministers, Corporates and many icons are taking amazing steps to make the programme a grand success.

PM Modi is a well known supporter of Yoga and has in the past attributed his fitness to regular yoga and breathing exercises.

Speaking about his fitness routine, the Prime Minsiter had said, “I am equally energetic from morning till night. I guess the secret behind it is yoga and [breathing exercises]. Whenever I feel tired, I just practice deep breathing and that refreshes me again.”

Fit India Movement is the latest among several other initiatives by the Prime Minister to promote fitness and health.