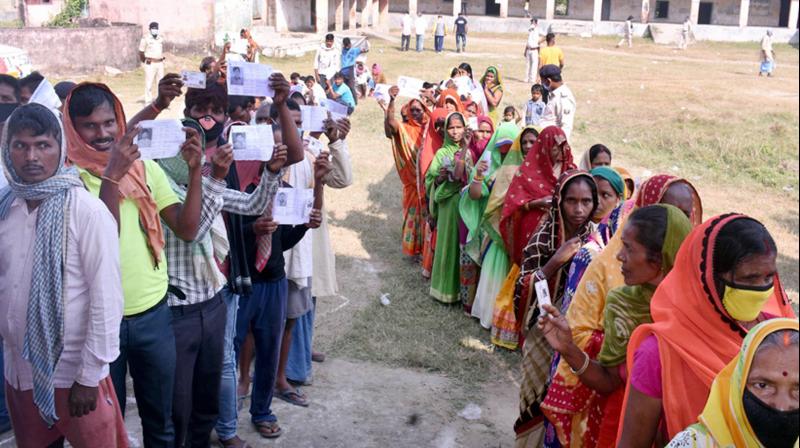 Voters stand in a queue at a polling station to cast their votes during the first phase Bihar assembly polls, amid the ongoing coronavirus pandemic, at Ara constituency in Bhojpur district, Wednesday, Oct. 28, 2020. (PTI Photo)

Patna: Around 53.53 per cent of voting was recorded during the first phase of Bihar Assembly elections on Wednesday.

According to reports, the highest turnout was recorded in Jamui district at 57.41 per cent followed by Kaimur at 55.95 per cent and Lakhisarai at 55.44 per cent.

The NDA is reportedly locked in a tough fight with RJD led grand alliance on at least 41 of 71 seats that went to polls in the first phase.

The elections in 71 constituencies spread across 16 districts were amid tight security and COVID-19 guidelines. The fate of 1,066 candidates have now been sealed in the first phase of the elections.

As many as 33 out of the 71 constituencies were declared as “sensitive or hypersensitive” by the state administration and special security arrangements had been made for the Naxal affected areas.

Among the prominent political leaders who are in the fray during the first phase of polls included HAM Chief Jitan Ram Manjhi and eight ministers of Nitish Kumar Cabinet.

Another key candidate whose fate is at stake in the first phase is ace shooter Shreyasi Singh from Jamui seat. She is making her debut at the age of 27. She is contesting on a BJP ticket against RJD's sitting MLA Vijay Prakash, who is the brother of former Union Minister Jai Prakash Yadav, a close aide of Lalu Yadav.

Among the political parties, the ruling JD(U) has fielded 35 and its partner BJP 29 candidates. The RJD and Congress have fielded 42 and 20 candidates respectively in the first phase of polls.

Chirag Paswan’s LJP, which broke away from the NDA citing ideological differences with Nitish Kumar, has fielded 41 candidates in the first phase.

In a statement after the first phase of polls, HAM spokesperson Danish Rizwan said, "Seeing the turnout of people our party is confident that Nitish Kumar-led NDA is going to form a government in Bihar."

Voting for the second and third phase is to be held on November 3 and 7. Results for 243 seats will be declared on November 10.