Among other issues of national importance, the RSS top brass is likely to discuss the coming Assembly polls 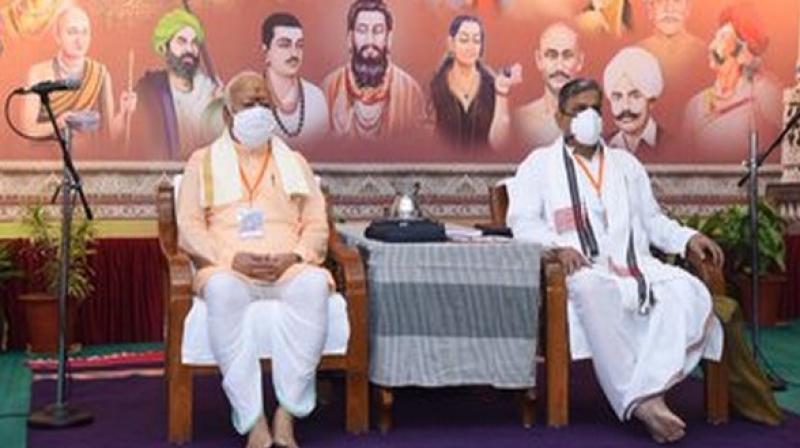 Mohan Bhagwat and Dattatreya Hosabale at the RSS meeting (ANI)

New Delhi/Dharwad: The Rashtriya Swayamsevak Sangh began a three-day all-India executive committee meeting in Dharwad, Karnataka, on Thursday, where it is likely to brainstorm on the strategy ahead and may also pass a resolution over the attacks on Hindus in Bangladesh during Durga Puja earlier this month. Among other issues of national importance, the RSS top brass is likely to discuss the coming Assembly polls and coordination between the BJP and the RSS cadre for the elections.

The session began amid the chanting of Vedic hymns, with RSS chief Mohan Bhagwat and general secretary Dattatreya Hosabale attending, along with over 350 organising secretaries from across the country. Some senior BJP central leaders are also expected to attend the meeting.

“Today, the executive committee meeting of the RSS started here. We will deliberate on the current status of the Sangh’s work, our future plans and the attacks on Hindus in Bangladesh,” RSS “Sah Prachar Pramukh” Narendra Thakur said. He said a resolution will be passed on the attacks.

According to another RSS functionary, the meeting also discussed the restructuring and reorganisation of the Sangh. He noted that the RSS’ national executive committee meets every year at the end of October.

However, last year for the first time, the meeting took place virtually due to the Covid-19 related restrictions. “This year, the quorum is complete. More than 350 people have gathered here,” said an RSS leader.

RSS Prachar Pramukh Sunil Ambekar had earlier said the Sangh would discuss its centenary celebrations plans for 2025. As part of its centenary celebrations, the Sangh has formulated a three-year action plan for its expansion starting from 2021 to 2024. The Sangh executive committee will discuss its plans to deal with the possible third wave of Covid-19 and to train its volunteers.