On another question, Naqvi termed the alleged police excesses on people during protests against CAA in UP as 'unacceptable'. 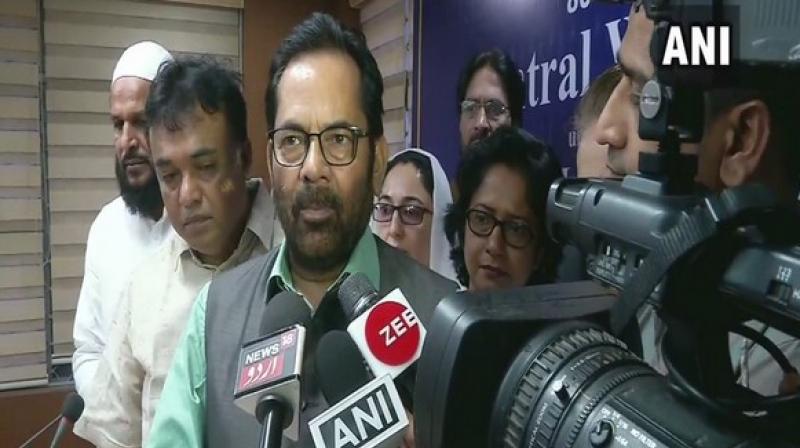 Union Minister for Minorities, Mukhtar Abbas Naqvi, on Saturday demanded "immediate action" against a UP cop who purportedly asked Muslims to "go to Pakistan" during a protest. (Photo: File)

Mumbai: Union Minister for Minorities, Mukhtar Abbas Naqvi, on Saturday demanded "immediate action" against a UP cop who purportedly asked Muslims to "go to Pakistan" during a protest.

"It is condemnable if it is true. Immediate action should be taken against the police officer," Naqvi told media here in response to a question on the incident.

In a viral video, a police officer was seen abusing and asking Muslims to go to Pakistan during an anti-CAA protest in Meerut, Uttar Pradesh.

Meerut ADG Prashant Kumar, however, defended the cop saying that he was trying to control the violent situation as the protesters were raising slogans hailing the neighbouring country.

"It is clear from the video that stones were being pelted, anti-India slogans and slogans hailing the neighbouring country were raised by the protestors at the spot. The officer only asked them to stop pelting stones and they can go there (Pakistan) if they wanted to," Kumar told ANI.

On another question, Naqvi termed the alleged police excesses on people during protests against the Citizenship Amendment Act (CAA) in UP as "unacceptable".

"Violence, whether it is being perpetrated by a mob or by the police, cannot be part of a democratic system and is unacceptable. Police and administration should also keep in mind that innocents should be not subjected to violence and brutality," he said.

The minister further said, "UP government will take action if police or administration has committed any kind of atrocities on the people."

Several leaders including Congress' Priyanka Gandhi Vadra, journalists and other noted citizens have condemned the Meerut cop's behaviour and police excesses against the protestors.