The development in Arunachal Pradesh will not affect the NDA in Bihar: Deputy CM Sushil Kumar Modi 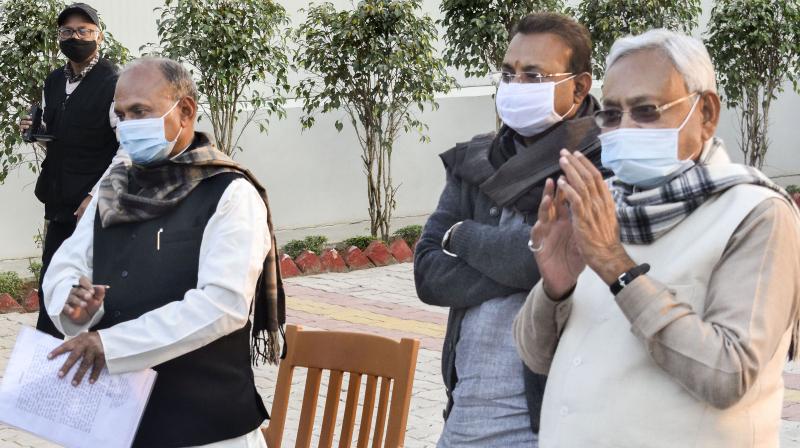 “I had no desire to become the chief minister. I accepted the offer due to the pressure, but I had earlier said the BJP could make its chief minister as the people’s mandate was clear”, Nitish Kumar said (Image:PTI)

Patna: After handing over the post of JD(U) national president to his trusted aide R.C.P. Singh, Bihar chief minister Nitish Kumar created a flutter in the NDA by saying that he didn’t want the chief minister’s post.

While addressing party leaders and workers during the party’s national executive meeting on Sunday Nitish Kumar said that he had to accept the CM’s post due to pressure from the BJP and he would not mind if anybody else was handed over the responsibility.

“I had no desire to become the chief minister. I accepted the offer due to the pressure, but I had earlier said the BJP could make its chief minister as the people’s mandate was clear”, Nitish Kumar said.

It should be noted that Nitish Kumar’s statement has come amid increasing tensions between the key NDA partners JD(U) and BJP after six of his party legislators in Arunachal Pradesh joined the BJP recently.

Top JD(U) leaders have been terming the development “against the coalition dharma”.

Amid these political developments, Mr Kumar visited JD(U) office on Monday and met party workers. Analysts are of the view that the political equations in the state may change in the coming days.

According to political analysts here, “JD(U) is not only upset with the development in Arunachal Pradesh, but it also feels that no action was initiated against the LJP for causing a massive dent to Nitish Kumar’s party during the Assembly polls”.

The BJP, with 74 seats, emerged as the largest party in the NDA, while the JD(U)’s tally slipped to number three position in the state after winning 43 seats. The JD(U) has been holding the LJP responsible for losing more than 20 seats during the Assembly elections.

Meanwhile, Rajya Sabha MP and former deputy CM Sushil Kumar Modi said on Monday that “the development in Arunachal Pradesh will not affect the NDA in Bihar and the government under the leadership of Nitish Kumar will complete its five-year tenure without any trouble. There is excellent coordination between the two parties in Bihar”.

He further clarified that Nitish Kumar had been reluctant to continue as chief minister after the Assembly elections and accepted the offer after being reminded that the NDA had sought votes in his name.

“Nitish Kumar was not ready to accept the CM post after the results were declared but agreed after the BJP and partners, including the JD(U) and VIP, reminded him that the NDA had sought people’s votes in his name”, Sushil Kumar Modi said.