3 years on, wounds of riots still raw in Muzaffarnagar

Demonetization has also had an impact on the local economy. 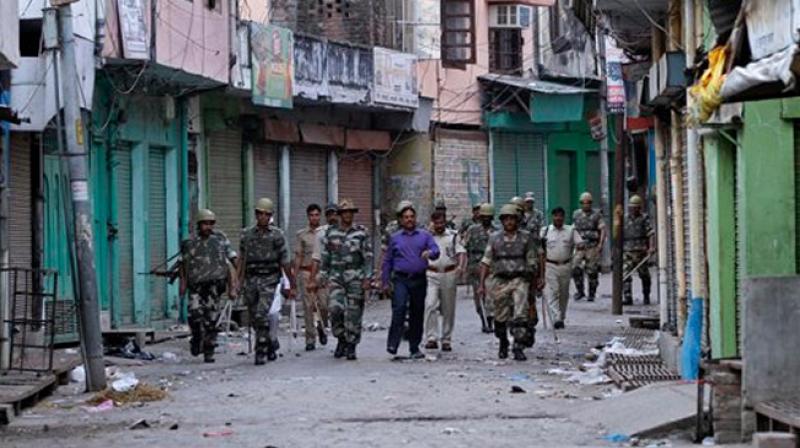 Officials and security forces patrol during an army-enforced curfew imposed following deadly clashes between Hindus and Muslims at Muzaffarnagar. (AP/File)

Muzaffarnagar: Raisa Bano, 48, sits under a shed with only a tarpaulin to save her five children from icy winds.

Hasan, her husband, works as a daily wage labourer in a farmhouse and the owner has allowed the family to live in the shed.

“We lived in Kutba village, but during the riots (in 2013), our house was burnt down and my father-in-law and brother-in-law were hacked to death. We took refuge here and have been staying here ever since,” she said.

Her children — three daughters and two sons — do not go to school, and she does not know what life holds for her family in the coming days.

Ask her about elections and her patience gives way. “The BJP people slaughtered my family and the government (controlled by the Samajwadi Party) did nothing to save us. We were denied compensation because we did not have money to bribe local officials. Hamare liye to sab chor hain (For us, all of them are thieves),” she said.

She says that when people from here community sought help from the local leaders, they all turned them away. “Now they are coming to ask for votes but none of us will vote for them. In any case, all our identity documents were destroyed when our house was ste on fire so we cannot vote,” she said.

In Meghakhari village, Jat families are also seething with rage — though for a different reason.

Naresh Sangwan and his three brothers — Rakesh, Suresh and Mahesh — are in their twenties. They are angry over the denial of reservation to the Jat community. “Our nephew lost his life in the 2016 agitation, and we had been promised reservation in Central services, but the BJP has forgotten its promise. The Modi government as well as the state government has done nothing for farmers and jobless youth. Cane farmers are yet to get their arrears. Why should we vote for such governments?” asks Naresh.

For the family, and others in the area, the BSP is emerging as an option, but the shadow of the riots is a roadblock in caste equations here too.

“During the riots, Muslims were pitted against Jats and Jatavs. The Hindu-Muslim divide is now so deep that the two communities will not vote together for one party. The BSP could be a gainer and also a loser in this scenario because it is unlikely to get votes from both communities,” said Rajiv Tyagi, a journalist with a local newspaper.

“People are taking jaggery in bullock carts to places like Lucknow Kanpur and even beyond because there are no buyers here. If we sell cane to sugar mill owners, we do not get payments on time. A number of cane growers are planning to migrate”, he says.

It is clear that security and economy are key issues in Muzaffarnagar that is yet to recover from the impact of riots.

“Even today, a slightest provocation is enough to trigger off clashes in Muzaffarnagar. A simple road mishap takes on a communal color if the parties involved belong to different communities. There is mistrust among the people and politicians have made no efforts to bridge the gap”, said a senior IPS officer who was earlier posted in the district.