'I have always fought against the Congress and now the party is moving away from its ideology', he said. 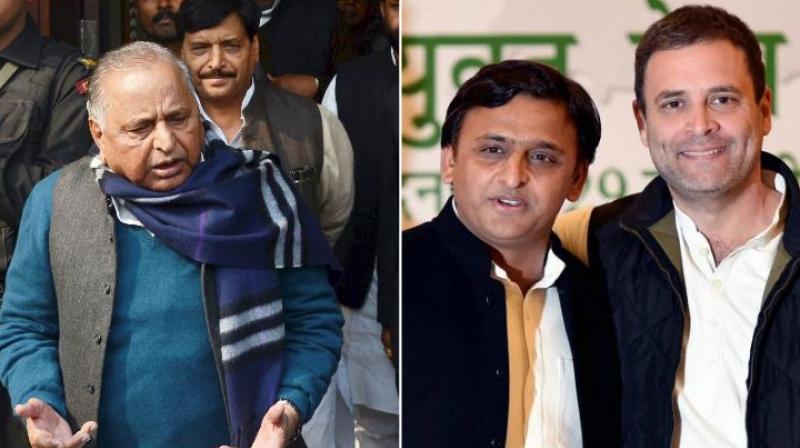 Lucknow: Samajwadi Party president Akhilesh Yadav and Congress vice-president Rahul Gandhi on Sunday made their first public appearance together after forging a poll alliance a week ago, and claimed that they would defeat the BJP’s “politics of hate” in the coming Assembly elections in Uttar Pradesh.

The new partners — dressed identically in white kurta and black jacket — smiled, hugged each other and exchanged bouquets at a press conference, and later launched their joint campaign through a roadshow in Lucknow.

But late in the evening, SP patriarch Mulayam Singh Yadav said in Delhi that he did not approve of the alliance, and would not campaign for the candidates.

In an interview to a news agency, he said that the SP was capable of contesting the elections on its own. “I have always fought against the Congress and now the party is moving away from its ideology”, he said.

He also expressed anger at the denial of tickets to some leaders. “What will our leaders who have been denied tickets do now? Will they sit at home for five years?” he asked.

Mr Gandhi, 46, who opened the media conference, said that the alliance was the confluence of the Ganga and the Yamuna, out of which the Saraswati of development would come out.

Mr Yadav, 43, said that he and the Congress leader were like the two wheels of the same bicycle (SP’s election symbol). “We were together in the Lok Sabha, we know each other,” the UP CM said.

“Agar cycle ko haath mil jaye to aur tez chalegi”, he said and added that the people had waited for “achche din” premised by the BJP, but in vain.

Mr Gandhi said that the alliance was for three Ps: progress, prosperity and peace, to which the UP CM added one more P (people). UP votes in seven phases starting February 11.

The two leaders helped each other in facing uncomfortable questions about the rocky relationship between the two parties in the past. The two said the alliance was backed by their personal equation.

Mr Gandhi admitted that there were differences between the two parties, but said, “We are looking to the future. We will give a government that fulfills the aspirations of the youth and works for the poor and farmers. This is our common minimum programme. It’s non-negotiable. Akhilesh also agrees with me on this”, the congress vice-president said.

The two leaders garlanded a statue of Mahatma Gandhi and then embarked on a 15-km roadshow on a customised bus with “UP Vijay Rath’ written boldly on it. The bus also had the symbols of both parties and photographs of Congress president Sonia Gandhi and SP patriarch Mulayam Singh Yadav. The new slogan ‘UP ko yeh saath pasand hai’ (UP relishes this alliance) was also written in bold letters.

The CM’s daughter, Tina Yadav, was also on the bus. The entire route was packed to capacity with people lurking from rooftops and trees to watch the two leaders together. Thousands of SP and Congress workers followed them. The idea was to send a message to minorities that the alliance can provide a tough challenge to the BJP.

During the press conference, the two leaders also evaded several questions. When asked to explain the Congress’ recent slogan “27 saal, UP behaal”, Mr Gandhi said, “I had said Akhilesh is a good boy, but he was not allowed to work.”

On differences over seats in Amethi and Rae Bareli, he said it was a peripheral issue, and not a central one.

Asked if Mulayam Singh Yadav and Sonia Gandhi would join the campaign, Mr Gandhi said he wouldn’t disclose their strategy, and the CM only said that the alliance had the blessings of both senior leaders.

There were also no clear answers to questions regarding the roles of Priyanka Gandhi and Dimple Yadav in the campaign. To a question if Rahul Gandhi would be the PM candidate in 2019, the CM did not say anything, but Mr Gandhi said the alliance for LS polls was open for discussions.

Mr Gandhi however said, “I respect Mayawatiji and Kanshi Ramji personally. BSP ran government and committed mistakes but the respect is intact.”

BSP’s Mayawati called the pact a conspiracy to indirectly benefit the BJP. “It is on the lines of dil mile na mile haath milate rahiye… they have come together at the BJP’s instigation to stop the BSP from forming a government,” she said.

BJP leader Siddharth Nath Singh said that the bicycle now did not have Mulayam Singh Yadav’s hand. “UP will reject the alliance of bhrashtachari (corrupt) andgundachari (goons) in the polls,” he said.