A multi-corner contest in this small state would mean split in the votebank which had brought BJP to power in 2012. 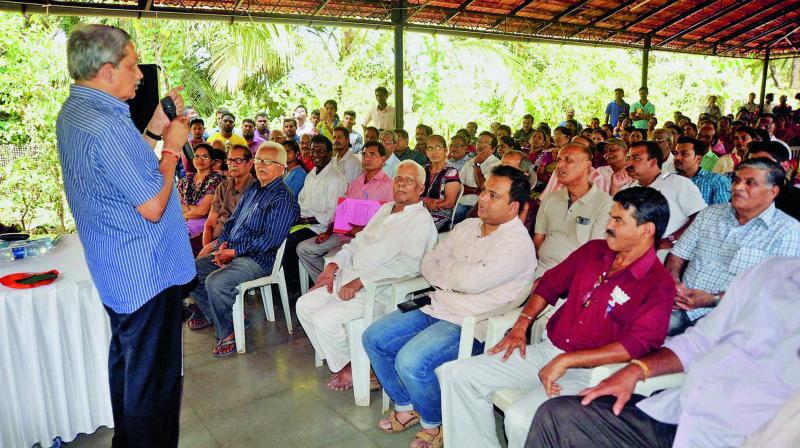 Panaji: In Goa, where the BJP is asking “For Goa’s gain BJP again” and most of the opinion polls predicting it having an edge over rivals, a multi-corner contest on most of the 40 Assembly seats could dent the ruling party’s prospects of retaining power.

Perhaps sensing this, even Prime Minister Narendra Modi had on Saturday urged the state electorate to give his party a “comfortable majority” while reminding them that how political instability in the state earlier had halted its development. A multi-corner contest in this small state would mean split in the votebank which had brought BJP to power in 2012.

The coastal state is set to witness a multi-corner contest on most of the seats with the BJP all set to lock horns with main opponent Congress and Arvind Kejrwal’s AAP, which is making its electoral debut. Other than the Congress and the AAP, smaller political outfits like Maharashtra Gomantak Party (MGP), United Goan Party, Goa Forward and Goa Vikas Party are also contesting on key seats. The Shiv Sena and NCP have also fielded their candidates. While MGP is BJP’s former ally, UGP’s Atanasio Monserratte is a Congress rebel. RSS’s rebel group GSM has partnered with MGP and Shiv Sena and they together are contesting on 26 seats. The NCP is also contesting on five seats.

BJP’s opponents have been highlighting how the ruling party failed to fulfil most of its last election’s poll promises, including shutting down casinos. Both Congress and AAP have promised to shut down casinos if voted to power.

Though most of the opinion polls have predicted BJP retaining power, but its own poll strategists are keeping a watchful eye on key constituencies also including Panaji, Mandrem, Bicholim and Cuncolim. The AAP has fielded former bureaucrat and its chief ministerial candidate Elvis Gomes from Cuncolim. BJP’s Subhash Naik is a sitting MLA from here. GVP’s John Inacio Monteiro, Shiv Sena’s Devendra Dessai and two independents — Alemao and Derick Dias are also contesting from Cuncolim.

UGP’s Atanasio Monserratte is contesting from Panaji, from where BJP’s Sidharth Sripad Kuncalienker is a sitting MLA. This was the long-time Assembly constituency of former CM and defence minister Manohar Parrikar. The Congress is said to be having a tacit understanding with Monserratte on this seat while AAP has fielded Valmiki Naik, its state convenor.

Polling for 40 Assembly seats is scheduled on February 4 and the BJP is hopeful that its tally this time will increase from 21, which it had won during last elections.  Congress had won nine and five seats were bagged by independents.

MGP had won three and GVP had bagged two seats during last elections. Sounding hopeful that the BJP will retain power, a senior BJP leader however, said that Mr Modi’s request that people should give his party a “comfortable majority” was an indication that even the party high command is aware that Goa elections are proving to be a “tough fight.”

Though BJP’s ‘star campaigner’ Mr Manohar Parrikar had claimed that his party is facing a “positive incumbency” in the state, some issues like erratic power and water supply, basic infrastructure including widening of roads, delay in granting licences to shack owners and Modi government’s demonetisation decision could spell trouble for it. Shack owners are already seething over delay in granting license by more than a month and the demonetisation decision, which they claim has “badly affected” the tourism business.

“First we lost nearly more than a month of the tourist season because government failed to reply to NGT (National Green Tribunal) and delayed our licences. After that many tourists cancelled their visit because of the demonetisation. BJP government it seems is only interested in casinos but not us. Our 50 percent business has been effected this time,” said Cruz Cardozo, president, All Goa Shack Owner Welfare Society.

For the upcoming assembly election in this coastal state, a total of 250 candidates are in fray for the 40 member assembly.  The BJP has fielded 36 candidates and will supporting Independent candidates in two constituencies. The Congress is contesting on 37 seats, NCP on 16 and the MGP-GSM-Shiv Sena alliance has fielded 26 candidates. Two candidates from UGP, three by Goa Suraj Party and four candidates have been fielded by GVP. The AAP has fielded 39 candidates.