Hate speeches set to rise as BJP hopes to cash in 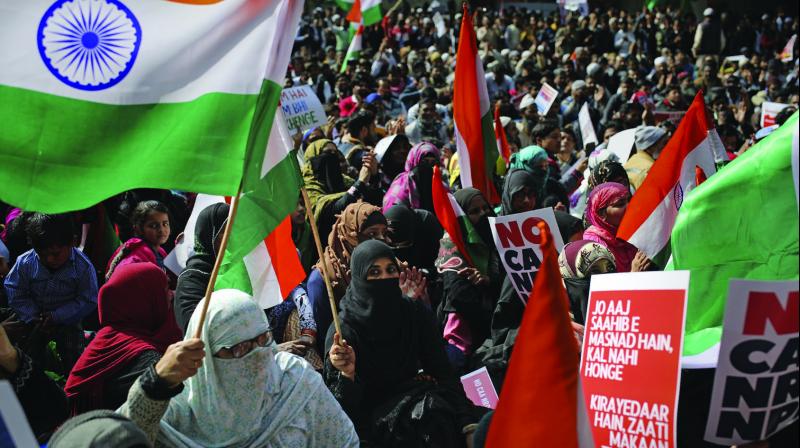 Muslim women hold the tricolour and placards as they participate in a protest against the Citizenship Amendment Act in New Delhi on Wednesday. (Photo: AP)

New Delhi: The blatant use of hate speeches and inflammatory rants is a well thought out electoral strategy unleashed by the BJP to win the Delhi Assembly elections. For the saffron pundits, the incessant verbal attacks against the minority community, particularly those protesting at New Delhi’s Shaheen Bagh, have begun “showing results”. The BJP’s strategists claimed the party’s tactical move to polarise votebanks was “rapidly consolidating the Hindu vote in its favour”.

As the Election Commission on Wednesday ordered the removal of BJP MPs Anurag Thakur and Parvesh Verma from the party’s list of star campaigners, on Wednesday evening, Mr Verma, West Delhi Lok Sabha MP, attended a public meeting addressed by Union home minister Amit Shah in Nazafgarh Assembly constituency. On the EC’s order, the BJP said the party has “not yet received copies of the EC order”. BJP vice-president Shyam Jaju argued what the EC had said was a “suggestion, not an order”, and that the EC “has not banned them from campaigning”.

“The party has not received any communication from the EC and will make a representation to the commission as and when the order is received,” said Mr Jaju, who is the BJP in-charge for Delhi.

Earlier, the Election Commission issued a showcause notice to BJP MP from West Delhi Parvesh Verma and Union minister Anurag Thakur for their controversial statements, saying that prime facie the remarks had the potential of disturbing harmony. Raising an alarm, Mr Verma said: “They will enter your houses, rape
your sisters and daughters, kill them... There’s time today, Modiji and Amit Shah won’t come to save you tomorrow.”

Raising the pitch, Tarun Chugh, BJP national secretary, not merely described Shaheen Bagh as “Shaitan Bagh” but also endorsed Mr Thakur’s speech — “Desh ke gaddaron ko... goli maaro salo ko”. Mr Chugh, who is also the Delhi BJP co-incharge and convenor of election management committee, also tweeted: “We will not let Delhi become Syria and allow them to run an ISIS-like module here, where women and kids are used. They are trying to create fear in the minds of the people of Delhi by blocking the main route. We will not let this happen. (We will not let Delhi burn). #ShaheenBaghKaSach.”

It is learnt the saffron party has conducted a three-day survey among people in public transport and other places to know the general sentiment over the ongoing protests at Shaheen Bagh against the CAA and NRC. “Two-thirds of respondents in the survey held in the Delhi Metro, buses and places frequented by people shows that the majority are against the Shaheen Bagh protest and they feel the stretch must be cleared of the protesters at the earliest,” said a senior party leader who is privy to the findings of the survey.

Based on the findings of the survey held last week, BJP strategists decided to use public sentiments to turn the tide in its favour, and from Monday hate speeches and inflammatory rants became part of the party’s campaign strategy. A senior BJP leader said that in coming days there will be an increase in inflammatory rants or hate speeches as part of its strategy to polarise voters on religious lines for the February 8 Assembly polls. “More players (party leaders) will be toeing the line taken by  Anurag (Thakur) and Parvesh (Verma). But who all will be toeing their line... only the senior party leadership will take a call on this matter,” he added.

At a public meeting in Rithala on Monday, Mr Thakur shouted “desh ke gaddaron ko”, to which the crowd responded “goli maaro saalo ko (sic)” (shoot down the traitors).  On Tuesday, Mr Verma had said: “What happened in Kashmir with Kashmiri Pandits could happen in Delhi also. Lakhs of people gather at Shaheen Bagh, they could enter houses rape and kill your sisters and daughters. The people need to decide now.”