India   Politics  30 Mar 2019  Congress concerned only about their 'malai', not 'bhalai': PM in Arunachal
India, Politics

Congress concerned only about their 'malai', not 'bhalai': PM in Arunachal

Modi said that Congress not only doubted surgical strike but also made fun of our scientists. 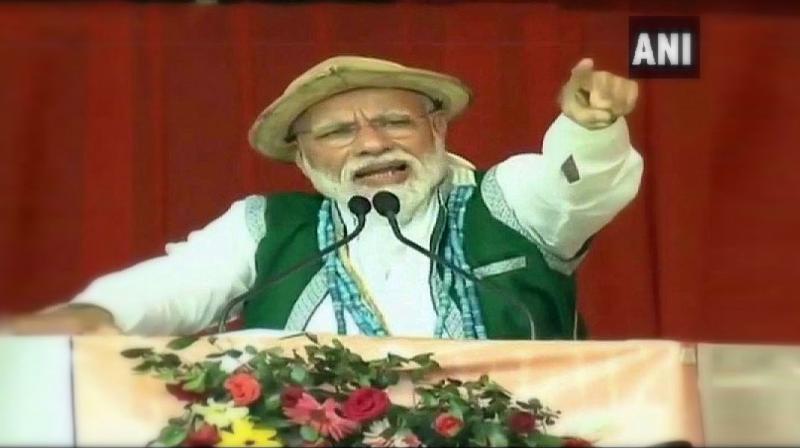 Prime Minister Modi slammed the Congress for questioning the valour of the jawans. (Photo: ANI | Twitter)

Aalo: Prime Minister Narendra Modi on Saturday claimed that the Congress party is concerned only about their 'malai' (personal well-being) and not the welfare of the state (bhalai).

Addressing a rally here, the Prime Minister said "For the past several decades, experts were saying that there is a dire need to develop infrastructure in Arunachal Pradesh. But the popular family (Congress) and their supporters sitting here were only focused on strengthening their empire. They are more concerned about their personal well-being rather than welfare of the state."

"We work for your 'bhalai' (well-being) but they (Congress) work for their 'malai' (personal benefit)..you have said goodbye to them. Now, do not let them enter again," he added.

Prime Minister Modi slammed the Congress for questioning the valour of the jawans.

"People have seen how Congress leaders reacted when our armed forces conducted surgical strikes to combat terrorism. When we entered the homes of the terrorists and killed them, the Congress was raising questions on the valour of our jawans," he claimed.

He also stated that the Rahul Gandhi-led Congress speaks the same language as that of terrorists.

"When our country does something good, when it achieves something, are you not proud? These leaders are not. When India achieved the surgical strike, these leaders' faces fell. They speak the same language of the terrorists. These leaders have no one in India but Pakistan has been singing their praises. Make them pay."

Accusing the Congress of indulging in corruption, Prime Minister Modi said: "In the name of running a newspaper, the Opposition's leaders have been looting the government. Here, local Opposition leaders steal from the plates of the poor, inspired by their leaders in Delhi. These are the very leaders who hit out at the Chowkidar. They think neither of you nor of the youth."

While addressing the rally, the Prime Minister also listed out his government's achievements in Arunachal Pradesh and stated, "Arunachal's 40,000 women have got free LPG connection. Over one lakh families got toilets and three lakh bank accounts have been opened."

The Prime Minister also stressed that the first ever Sainik School in the region was set up under his rule. "Kamal (BJP symbol) has already bloomed on three seats in Arunachal. Trying to make India better. My government is committed to Arunachal’s development," he added.

Polling for the two Lok Sabha seats at stake in the state will be held on April 11, and counting of votes will take place on May 23.