The West Bengal chief minister also tasked her party leaders to create awareness among the public. 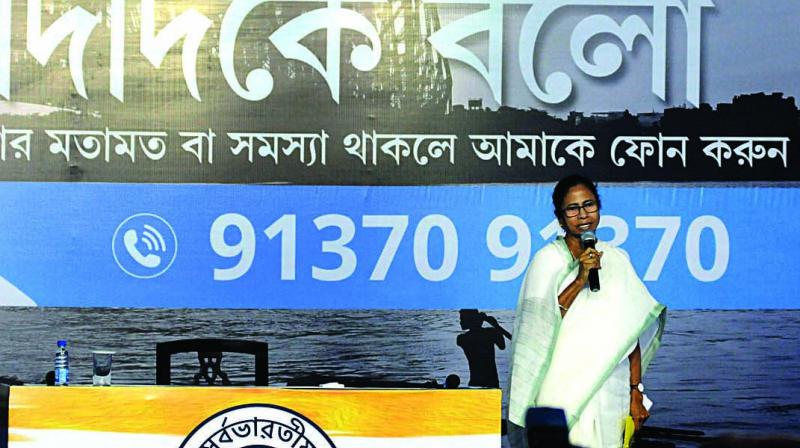 Chief minister and Trinamul Party chief Mamata Banerjee talks to people during the inauguration for better public relation TMC initiative — a portal ‘Didi Ke Bolo’ and a phone no that can directly connect with her for any type of suggestions or problems — at Nazrul Manch in Kolkata on Monday. (Photo: Abhijit Mukherjee)

Kolkata: Eyeing her political survival in the 2021 Assembly Election in West Bengal, Trinamul Congress supremo Mamata Banerjee on Monday launched a hi-tech mass outreach programme: Didi Ke Bolo (Tell Didi) with a helpline number: 9137091370 and www.didkebolo.com to directly connect with at least 80 per cent households (1.6 crores) at the grassroot level in the state over the next 20 months.

This is the first time in the Trinamul’s history she has undertaken such a mega campaign, believed to be the brainchild of the Indian Political Action Committee (IPAC) run by political strategist and Janata Dal (United) vice -president Prashant Kishor who was roped in by her last month in wake of the BJP’s victory in 18 seats out of 42 in the state in the Lok Sabha Election. Mr Kishor was not present at the launch however.

The one-call-away drive covers social media on the digital platform where ‘Didi Ke Bolo’ will have its accounts on Twitter, Facebook and Instagram. Similar launch has been planned across the state by elected representatives and important leaders of the Trinamul in more than 1000 locations over the next 3-5 days. The West Bengal chief minister also tasked her party leaders to create awareness among the public.

Setting a deadline before them she announced after a meeting with her party MLAs that over 1,000 elected representatives and key functionaries of the Trinamul would personally visit and spend nights at more than 10,000 villages and urban habitations in the next 100 days. Ms Banerjee informed that they would also have dinner with local party workers and booth-level members spend the night at one of their houses.

Each of these leaders would also conduct a three-hour long Jana Sangjog Sabha at the places of their visit. Ms Banerjee however rejected the possibility that her party has lost connection with the grass-root level. “The connection at the grassroot level is already there. That is why our campaign will be strong. Our party will decide who will go to which village and when,” she said after unveiling the campaign before the media.