JD(U), AIADMK walks out of RS in Triple Talaq debate, odds now in favour of BJP 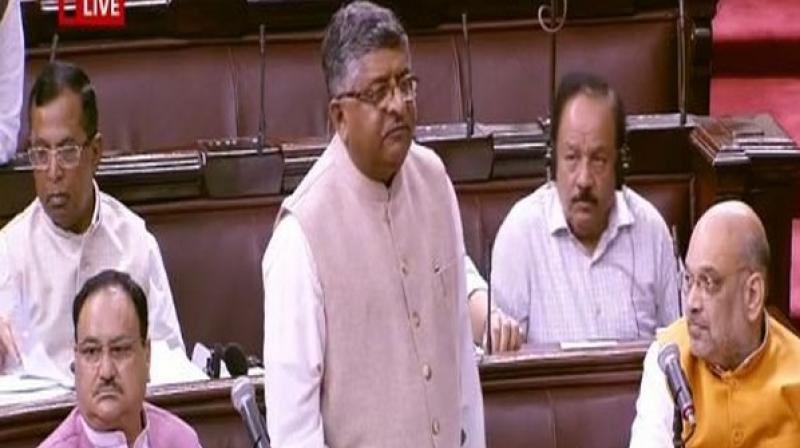 New Delhi: NDA ally Janata Dal (United) staged a walkout from the Rajya Sabha on Tuesday during a discussion on the contentious Triple Talaq bill, which criminalises instant divorce by Muslim men.

AIADMK, another ally in the NDA, has also followed suit. All India Anna Dravida Munnetra Kazhagam (AIADMK) Rajya Sabha Floor Leader, A Navaneethakrishnan told ANI, "We are against the Triple Talaq Bill. So, at the time of voting, we will walk out."

The total strength of the Upper House is 241, which goes down to 213 after counting walkouts by Janata Dal United and the AIADMK. The new majority mark will then be 107. The NDA has 107 members in the Upper House, which already makes for smooth passage of the bill.

Union Minister Ravi Shankar Prasad earlier introduced the contentious Triple Talaq bill, which criminalises instant divorce by Muslim men, for consideration and passage by Rajya Sabha saying it was a matter of ‘equality’.

“This is a matter of gender justice, dignity and equality,” the law minister was quoted as saying while tabling the bill that has been already cleared by the Lok Sabha by a voice vote amidst a walkout by the Opposition parties. The ruling BJP, the Opposition Congress and the Trinamool Congress earlier issued whips to their members to be present in the House today.

The walkout is expected to bring down the majority mark and hence make it easier for the government to push through the bill in the Rajya Sabha.

Just before walking out, JD(U) leader and member of the Rajya Sabha Bashishtha Narain Singh said that his party followed the ideology of leaders like Mahatma Gandhi, Ram Manohar Lohia and Jayaprakash Narayan and stated that they opposed the Bill. “Hum iss ka bahishkar karte hain,” he said.