India   Politics  30 Aug 2019  They must behave like normal neighbours: Centre after Pak's letter to UN on J&K
India, Politics

They must behave like normal neighbours: Centre after Pak's letter to UN on J&K

Kumar said the government had received information on infiltration by terrorists from Pakistan. 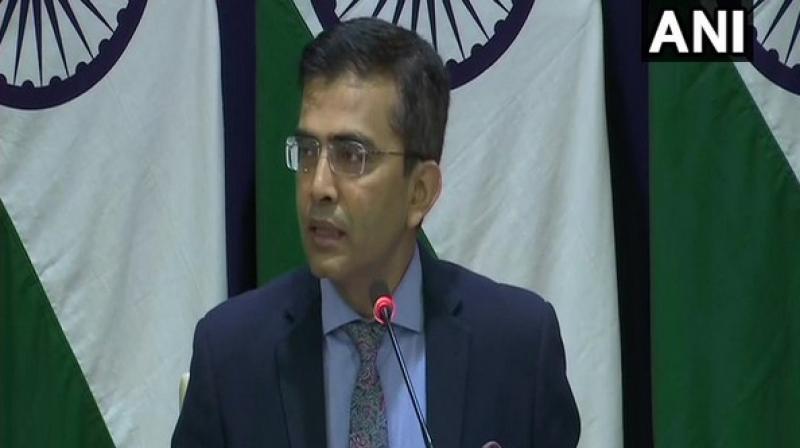 New Delhi: Reacting to Pakistan’s letter to the UN on Jammu and Kashmir -- which became controversial because it referred to comments by Rahul Gandhi and Haryana Chief Minister M L Khattar, the government on Thursday denounced what it called “highly irresponsible” and was "not worth the paper it was written on”.

"We condemn the irresponsible remarks and tweets by Pakistani leaders on matters internal to India," said foreign ministry spokesperson Raveesh Kumar, referring to Pakistani ministers making threats following the government's decision to end special status to Jammu and Kashmir and split it into two union territories.

Kumar said the statements included an apparent reference to "Jihad within the territory of India to incite violence". Pakistan Railway Minister Sheikh Rashid Ahmed on Wednesday "predicted" war between the neighbours in "October or November".

"The main motive behind this is to form an alarming situation for India which is far from ground realities. Pakistan needs to understand that they have been snubbed from all sides. The world has seen their provocative and unsubstantiated rhetoric based on lies and deceit," said the foreign ministry official.

Kumar said the government had received information on infiltration by terrorists from Pakistan.

On the letter written by Pakistani minister Shireen Mazari to the UN on Jammu and Kashmir, Kumar said: "Frankly, we don't want to lend credence to the letter by reacting to it."

The letter quoted Congress leader Rahul Gandhi has saying things were "not right" in Jammu and Kashmir, which has been under a security lockdown since August 4 to avoid any backlash over the centre's changes.

On Wednesday, Rahul Gandhi had asserted that "there is no room for Pakistan to interfere in Kashmir" and the violence in Jammu and Kashmir is being "instigated and supported by Pakistan which is known to be the prime supporter of terrorism across the world."

The ruling BJP had attacked him for making statements that had been seized by Pakistan for its propaganda.