This was the first time that a foreign delegation was allowed to visit Jammu and Kashmir post-abrogation of Article 370. 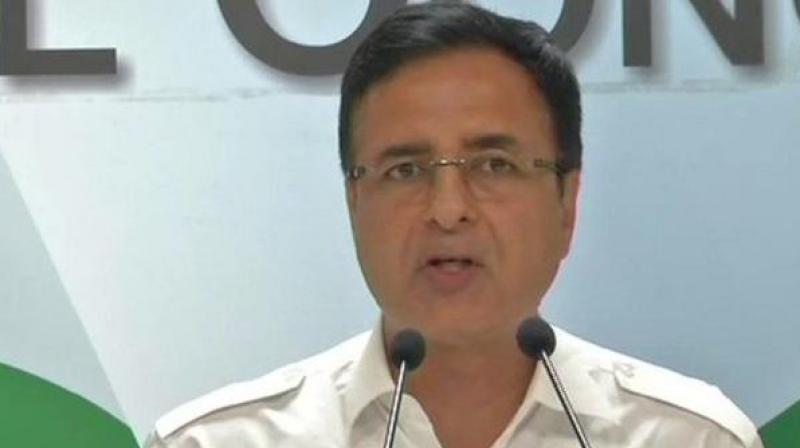 Surjewala asked why a third party was invited to assess the ground situation in Kashmir. (Photo: File)

New Delhi: The Congress on Wednesday accused Prime Minister Narendra Modi and his government of committing 'gravest sin' by reversing India’s time-tested policy of no third party interference or mediation in the Kashmir matter.

“Modi government has committed the gravest sin of reversing this policy over the last three days. It has insulted India’s Parliament and our democratic spirit. When our own Members of Parliament and Leaders of Opposition visit Kashmir, they are detained and deported from the airport. On the other hand, the BJP government is rolling out the red carpet for a private visit by EU MPs facilitated by an unknown international business broker,” Congress party’s chief spokesperson Randeep Singh Surjewala told a news conference in Delhi.

The Congress came down heavily on the government over the organisers of the European Union MP's trip to Kashmir and asked PM Modi to come clear on Mandi Sharma who facilitated the delegation's tour of the Valley.

“Will the Prime Minister tell as to who is ‘Madi Sharma’? What is BJP’s connection to ‘Women’s Economic and Social Think Tank’ as also to the ‘International Institute for Non-aligned Studies’? Why and in what capacity is Madi Sharma fixing an appointment with the Prime Minister for a delegation of EU MPs on a personal visit and why is the Government of India facilitating it? Where is the money to finance the entire visit coming from? Why has MEA been completely sidelined?” he asked.

“Over last three days, India witnessed an immature, ill-advised and ill-conceived PR exercise of BJP government organised by an ‘International Business Broker’, in which 27 members of European Parliament were brought to India by a non-descript think tank with questionable credentials to meet with the Prime Minister, visit Kashmir and hold press briefing,” he added.

Surjewala, further said that out of 27, only 23 went to Kashmir on a BJP government facilitated trip. The other four members of the delegation returned from Delhi itself, the Hindustan Times reported.

The Congress leader said that PM Modi has committed the biggest 'diplomatic blunder' in India's history by outsourcing diplomacy to an ‘International Business Broker’. He said that it has been India’s time-tested policy over the last 72 years that Kashmir is its internal issue and it will never accept any interference or third party mediation of any nature from any government or group of people or organisation or any individual.

He asked why a third party was invited to assess the ground situation in Kashmir and that too through an unknown think tank. “By doing so, the government has caused an affront to India’s sovereign right over Jammu and Kashmir. We call upon the Prime Minister to come forward and answer these issues of challenging India’s sovereignty, national security and insult of India’s Parliament,” Surjewala said.

"I don't have an objection to the European Union Parliament delegation visiting Jammu and Kashmir. What I object to is that the MPs of our own country are not being allowed to visit the place. I myself tried to visit Srinagar several times but I was sent back," he had said.

The delegation of MEPs including Germany's Bernhard Zimniok, Lars Patrick Berg and Nicolaus Fest on Tuesday visited Jammu and Kashmir to assess the ground situation in the region following the Centre's decision to strip the region of its special status under Article 370 of the Constitution on August 5.

This was the first time that a foreign delegation was allowed to visit Jammu and Kashmir post-abrogation of Article 370.