Sasikala belongs to the dominant Thevar community which also is said to have played a major role in O Panneerselvam. 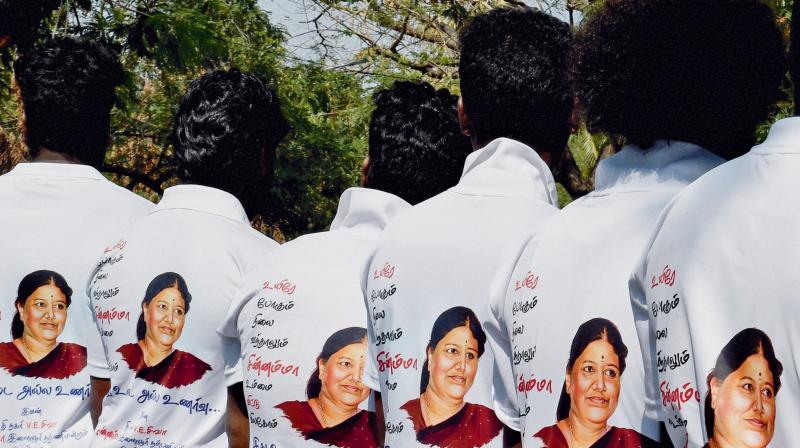 Chennai: Always seen as a shadow of Jayalalithaa and never heard in public, Sasikala Natarajan on Thursday emerged as her political heir to lead AIADMK which has had hugely charismatic figures at its helm in all its 45 years.

Blamed once for Jayalalithaa’s disastrous election loss in 1996, the 60-year-old, who was a video library owner before getting close to the late leader,, was always considered having a clout in the running of the party.

Having accompanied Jayalalithaa to prison when arrested in a disproportionate assets case, Sasikala’s roller-coaster career saw her being expelled for anti-party activities only to be restored in a few months five years ago.

Jayalalithaa’s demise on December 5 was seen as a personal loss for Sasikala who was a permanent resident of Jayalalithaa’s house Veda Nilayam in Poes Garden, even choosing to stay away from her husband.

She continued to be by Jayalalithaa’s side when she was hospitalised on September 22 that stoked some controversies, including that access to the ailing leader was not being allowed even to her kin.

Sasikala belongs to the dominant Thevar community which also is said to have played a major role in O Panneerselvam, who is also from the same community, becoming the stop-gap chief minister whenever Jayalalithaa had to step down and even after her death.

An aspiring small-time entrepreneur offering video coverage services and allied products like video cassettes in the early 1980s, she got acquainted with Jayalalithaa in 1982 along with her husband M. Natarajan through the then IAS officer V.S. Chandraleka.

When Jayalalithaa was organising a party conference in Cuddalore in 1982 — a new entrant to AIADMK then, it was Sasikala who had got the event video-graphed.