The three-party alliance comprising the JMM, Congress and RJD has won 47 out of the 81 seats in the Assembly elections. 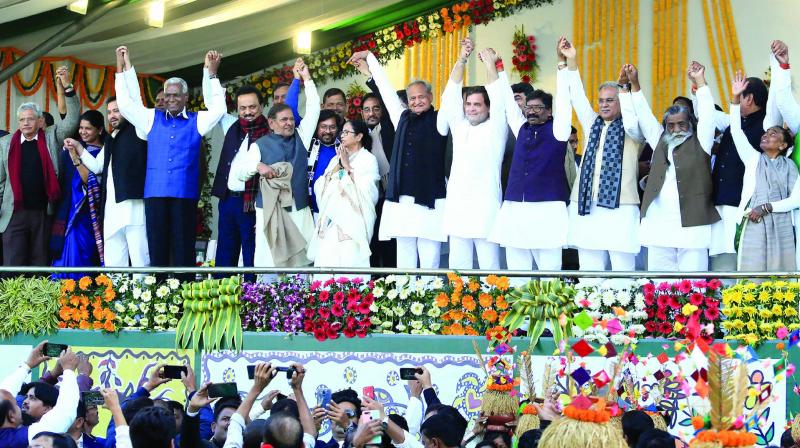 Patna/Ranchi/New Delhi: In a major show of strength, a large number of Opposition leaders were on hand as JMM leader Hemant Soren took the oath as Jharkhand chief minister for a second time on Sunday at a grand ceremony at Morabadi Ground in Ranchi, the state capital. The large Opposition turnout could be the harbinger of a broad-based anti-BJP alliance amid the uproar over the new citizenship law.

Attired in a white kurta-pyjama ensemble and a Nehru jacket, the 44-year-old tribal leader was sworn in as the state’s 11th chief minister by governor Droupadi Murmu.

Jharkhand Congress leaders Alamgir Alam, Rameshwar Oraon and RJD legislator Satyanand Bhokta also took the oath as ministers during the event which was dubbed as “Sankalp Diwas” by the JMM-Congress-RJD alliance.

The three-party alliance comprising the JMM, Congress and RJD has won 47 out of the 81 seats in the Assembly elections. The Hemant Soren-led JMM with 30 seats emerged as the largest party in Jharkhand, while the Congress won 16 and RJD one seat. The BJP clinched 25 seats, the AJSU two, JVM-P three and others four seats. This was the second state to slip out of the BJP’s grasp since the NDA’s sweeping victory in the Lok Sabha elections.

Reports suggest that a team of election strategists and a massive social media campaign helped Mr Soren and his alliance partners defeat the BJP in the Assembly polls.

The huge Opposition turnout is also being seen as a major boost for the RJD and Congress preparing to get into a direct electoral battle with the JD(U)-BJP combine in the Bihar Assembly elections scheduled for 2020.

“All of us are confident that the NDA will be wiped out and a grand alliance government will be formed in Bihar in 2020. I also firmly believe that under the leadership of Hemant Soren, the newly formed Jharkhand government will work for the masses and the state will develop fast”, said former Bihar CM and RJD leader Rabri Devi.

After the ceremony, Rahul Gandhi tweeted: “I attended the swearing in ceremony of CM Hemant Soren Ji and ministers from the Congress party in Ranchi today. I’m confident that the new Gover-nment in Jharkhand will work for the benefit of all citizens and usher in an era of peace and prosperity in the state.”

Prime Minister Narendra Modi on Sunday congratulated Hemant Soren on being sworn in as chief minister of Jharkhand, and he assured all possible support from the Centre for the state’s growth.