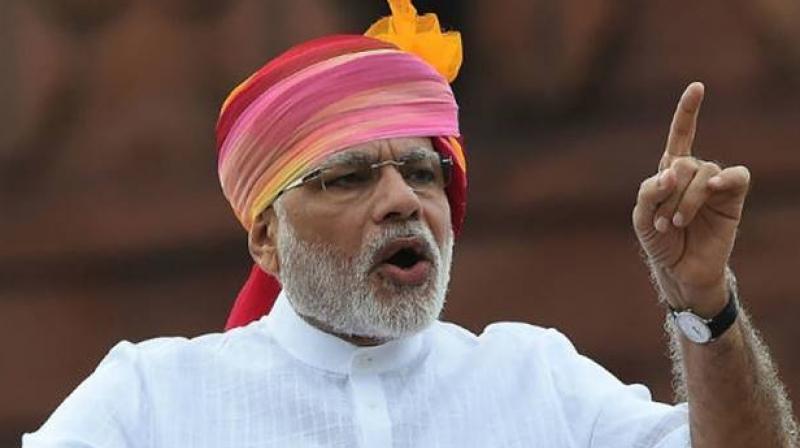 Thousands flooded New Delhi on Tuesday, driving tractors from border camps where they have been holding sit-ins since November 26; but the rally turned into a rampage which left one person dead and hundreds of police injured.

Modi called the farmers' assault on a historic fort an "insult" to the national flag.

His government have insisted that the agriculture sector needs to be modernised, but farmers fear the deregulation laws will place them at the mercy of big corporations that already dominate other industries.

In his first public comments on Tuesday's events, Modi stressed that the government remained "committed to modernising agriculture".

"The efforts of the government shall also continue in the future," the Indian leader said in his regular monthly radio address on Sunday.

"On January 26, seeing the insult of our tricolour, the country was very sad," he added.

The demonstrators swarmed the 400-year-old World Heritage-listed Red Fort on Tuesday, raising religious and farm union flags, though they did not remove the national flag from the top of the monument.

Modi's comments came as police arrested at least one journalist and filed complaints against others, stoking fears of a media crackdown over the reporting of the protests.

Mandeep Punia, who writes for the English-language Caravan magazine, was detained on Saturday at Singhu, one of the main protest sites.

He was photographed being taken to court on Sunday, where he is expected to be charged on unknown offences, local media reported.

Since Tuesday, at least five complaints have been registered against Indian journalists and an opposition Congress member of parliament on several allegations, including sedition and criminal conspiracy.

Global media watchdog the Committee to Protect Journalists called for Punia and another journalist who was reportedly also detained to be released immediately.

"Indian authorities should allow journalists to do their work without interference," the CPJ tweeted late Saturday.

On Saturday, police tightened security around the camps after cutting internet connections in the local areas, as thousands more farmers arrived at the sites to join the protests.

Farming has long been a political minefield, with nearly 70 percent of the 1.3-billion-strong population drawing their livelihood from agriculture.