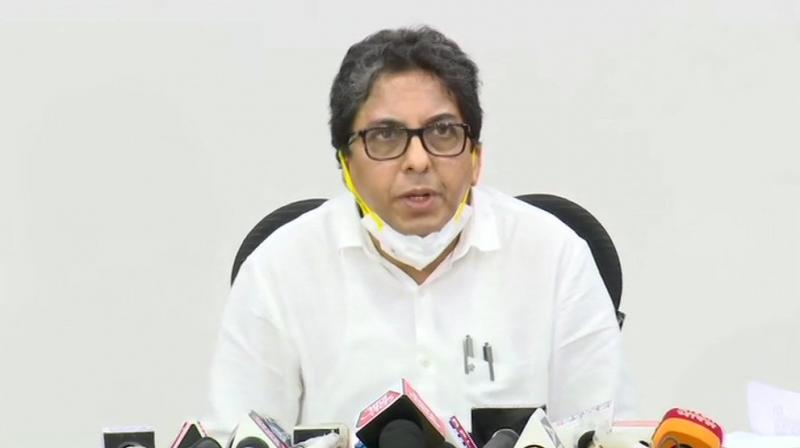 Alapan Bandyopadhyay got a three-month extension last week from the Narendra Modi government after a request from the Trinamul Congress government for his efficiency in handling the Covid-19 pandemic. (Photo: ANI)

Kolkata: Speculation is rife that West Bengal chief secretary Alapan Bandyopadhyay may not visit New Delhi on Monday, which is also the date of his retirement, to report to the Centre despite its direction for his deputation as the Mamata Banerjee government has not relieved him yet from his present post in the state.

The state’s top bureaucrat, who got a three-month extension last week from the Narendra Modi government after a request from the Trinamul Congress government for his efficiency in handling the Covid-19 pandemic, has been asked to report at 10 am on Monday at North Block, at the department of personnel and training under the ministry of personnel, public grievances and pensions which is headed by the Prime Minister himself.

The order was sent under the provisions of Rule 6(1) of the Indian Administrative Service (Cadre) Rules 1954 on May 28 evening, hours after the 1987 batch IAS officer accompanied the chief minister in skipping the PM’s review meeting on Cyclone Yaas at Kalaikunda Air Force Station in West Midnapore.

While the Trinamul Congress supremo on Saturday appealed to the PM and Union home minister Amit Shah to withdraw the Centre’s controversial order after attacking them, the state government has received no further communication from the Centre till the reports last came in on Sunday evening.

On the other hand, the state government has also taken a firm stand by not issuing Mr Bandyopadhyay any order for his release, which is essential for all bureaucrats in the all-India service cadres to go for a Central deputation from their places of posting in the state.

It maintains that since Mr Bandyopadhyay has not applied for a Central deputation and the Centre had sought neither any concurrence nor any empanelment for his Central deputation, the question of relieving him does not arise, although the Centre’s stand gets the priority in such a situation, according to sources.

On Sunday afternoon, Mr Bandyopadhyay along with his wife, Calcutta University vice-chancellor Sonali Chakravarti Banerjee, visited his office at Nabanna, the state secretariat. He is expected to attend a meeting to be chaired by the CM on Monday to discuss the damage caused in the state due to Cyclone Yaas.

The tug of war over the state’s top bureaucrat has meanwhile turned into a political slugfest between the BJP and the Trinamul Congress.

Attacking the CM, state BJP chief and Midnapore MP Dilip Ghosh said: “Everyone saw what she did on that day. Accompanied by the state chief secretary, she met the PM and left. Where is the decency in it? What kind of honour is this? She earlier spoke indecently about the PM too. It does not suit her to talk about honour and the Constitution in any way. She wants to play politics only.”

Serampore TMC MP Kalyan Banerjee hit back at Mr Ghosh. He claimed: “The BJP is anti-Bengali. He is a carrier of it. Though he is a Bengali, he has sold himself to the non-Bengali leaders of their party, and fell at their feet for his survival.”