India   Politics  31 Jul 2020  Mamata does unto BJP what BJP does unto Congress
India, Politics 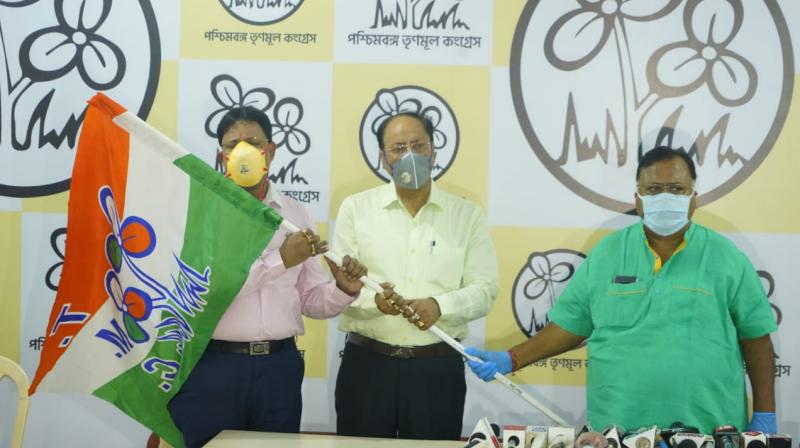 Biplab Mitra is handed a flag of the Trinamool Congress as a mark of his reinduction into the party at a ceremony on Friday. (Twitter)

Kolkata: Trinamool Congress chief Mamata Banerjee's gambit of inviting defectors back to the party hooked its first catch on Friday with the 'homecoming' of Biplab Mitra, a prominent political leader from North Bengal.

The former Trinamool Congress MLA from Harirampur in South Dinajpur district had defected to the BJP in June last year but decided to get back to Mamata Banerjee's side a little more than a year later.

With elections coming up in West Bengal, Mamata Banerjee has weeks baited several defectors to the BJP. In one case a former football star changed his mind about joining the BJP hours before his induction ceremony at the party office in Kolkata.

Mitra said he decided to return to the Trinamool Congress to fight a "conspiracy that is being plotted against West Bengal".

"We are happy to welcome Biplab Mitra. Mamata Banerjee during the Martyr's day rally on July 21 had asked old-timers to return to the party fold. He has responded to it," TMC secretary-general Partha Chatterjee said.

The process of reinduction of the old guards, who had left the party for some reasons, has already begun, he said.

Biplab Mitra was a founding member of the TMC since its inception in 1998. He was considered one of the architects of the party's rise in South Dinajpur district but was sacked after the Lok Sabha poll debacle.

Following the BJP's good performance in the Lok Sabha elections, Mitra, known to be a close aide of BJP leader Mukul Roy during the latter's days in the TMC, joined the saffron camp.

The BJP became a claimant to the status of main opposition party in West Bengal by winning 18 out of the 42 Lok Sabha seats in the state in 2019, bringing down the TMC's tally to 22 from 34.

The BJP leadership is yet to react to the development. A state BJP leader said it is an "embarrassment for the party as it has failed to retain the leaders who joined the saffron camp from other parties".