India   Politics  31 Aug 2020  Pranab Mukherjee passes away: Why the hell did we never ask him to be our PM?
India, Politics

Pranab Mukherjee passes away: Why the hell did we never ask him to be our PM?

In a glittering career, he served in every capacity he was asked to but never the one he wanted 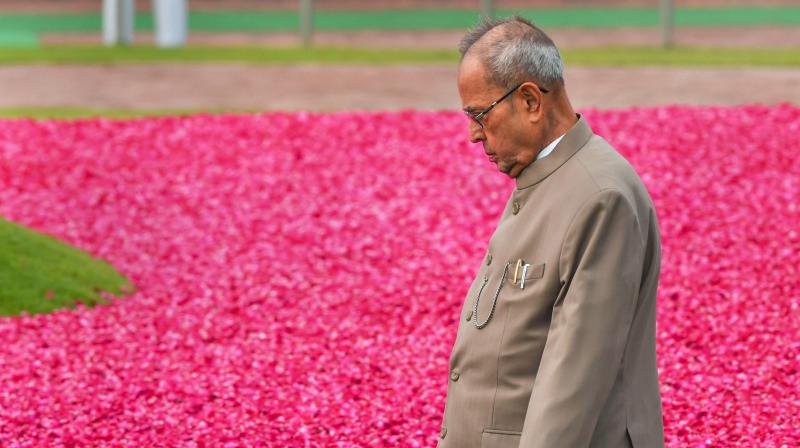 New Delhi: Former president Pranab Mukherjee died on Monday in an army hospital here, his son Abhijit said. He was 84.

"With a Heavy Heart, this is to inform you that my father Shri Pranab Mukherjee has just passed away in spite of the best efforts of doctors of RR Hospital and prayers duas and prarthanas from people throughout India! I thank all of You Folded hands," Abhijit Mukherjee tweeted.

The former president was admitted to the hospital in Delhi Cantonment on August 10 and was operated the same day for removal of a clot in his brain. He later developed a lung infection.

"His demise is the passing of an era," said Kovind. "The nation mourns one of its worthiest sons."

Modi said he was blessed to have the guidance of president Mukherjee when he became prime minister. "He left an indelible mark on India's development trajectory; a scholar par excellence, a towering statesman, admired by all," Modi said.

"Mukherjee made Rashtrapati Bhavan more accessible to citizens; made it a centre of learning, innovation, culture, science and literature," the PM added.

Pranab Mukherjee became the 13th president of India (2012-2017) after a stellar career in the upper echelons of multiple governments. Universally acknowledged as Prime Minister material, although he went close to several times spread our three decades.

Although he was a trusted troubleshooter for three Congress prime ministers,  Pranab Mukherjee's climb up the political ladder stopped just short of 7 Race Course Road, instead sending him to the Rashtrapati Bhavan as the country's first citizen.

A people's person till the end, 'Citizen Mukherjee' used Twitter to communicate to the world that he had tested positive for COVID-19 on August 10. It was his last post, and his last words to the public.

Demonstrating his ability to quickly adapt to situations as they arose, Mukherjee was at ease with the new mode of communication. Twitter was a platform he used often, to express his condolences on the death of leaders and friends, greet people on festivals or wish them on their birthdays.

Some politicians don't fade into the background. And so it was with the scholarly Mukherjee too. He remained a presence to contend with even after he demitted the office of president, often making headlines as he attended book launches and delivered lectures.

It was a life of many firsts and accomplishments for the man famed for his encyclopaedic memory, razor-sharp intellect and deep insight into issues.

In 1982, he became India's youngest finance minister when he was just 47. In the years that followed, he served as India's minister for external affairs, defence, finance and commerce and was the first Indian president to have done so.

There were other landmarks in a remarkable political career, which started in 1969 as a Rajya Sabha member for the Bangla Congress which subsequently merged with the Congress.

Mukherjee was famous in political circles as a consensus builder. He inspired trust among leaders across the political spectrum, an asset that proved handy at the time of his election as president.

It was a many splendoured political career, which ended at the presidential palace. But the prime minister's post eluded him, even though it was a position he openly aspired for.

In his book 'The Coalition Years', Mukherjee acknowledged that he had hoped to get the post in May 2004 after then Congress president Sonia Gandhi herself declined the position.

"Finally she named Dr Manmohan Singh as her choice and he accepted. The prevalent expectation was that I would be the next choice for prime minister after Sonia Gandhi declined," Mukherjee wrote, admitting that he had initially refused to join the cabinet of Manmohan Singh who had been his junior in the past but agreed when Sonia Gandhi insisted.

Mukherjee remained the UPA's chief crisis manager through its tumultuous years, starting 2004 until he became president on July 25, 2012.

Born on December 11, 1935 in the small village of Mirati in West Bengal's Birbhum district, Mukherjee received early lessons in life from his freedom fighter parents. His father, a Congress leader, endured great financial hardship and was sent to jail several times for his role in the freedom struggle.

The roots were strong and never forgotten, taking him back often from the corridors of power to his village during Durga Puja, even when he became president. Photographs of Mukherjee, performing prayers in a traditional dhoti, made it to the public domain through his years as minister and president.

In 2015, he lost his wife Suvra Mukherjee. He is survived by his two sons Indrajit and Abhijit, and daughter Sharmistha, who was by his side during important events of his president years.

Mukherjee, who served in the Rajya Sabha for five terms and in the Lok Sabha twice and was one of India's longest serving parliamentarians, became a member of the Congress Parliamentary Party when the Bangla Congress merged with the Congress in 1971.

Though he occupied various positions in the government, Mukherjee was elected to the Lok Sabha for the first time only in 2004 when he won from West Bengal's Jangipur constituency. He had lost the previous two Lok Sabha  contests -- from Malda in 1977 and Bolpur in 1980.

With his vast knowledge of post independence political history and governance, Mukherjee remained a key figure and active participant in shaping the course of India's development.

From 2004-2012, Mukherjee played a key role in critical decisions of the Manmohan Singh-led government on issues such as Right to Information, food security as well as the setting up of the UIDAI and the Metro Rail project.

He was also known as one of the chief architects of the post-Congress era of Indian politics, playing an active role in galvanising the outside support which the Congress offered to the United Front governments led by then prime minister H D Deve Gowda and later I K Gujral.

Most of his political life spent as a committed Congress member -- except for a brief spell between 1987 and 1988 when he was out of the party -- was fairly non-controversial.

But in June 2018, a year after he demitted office, Mukherjee triggered huge controversy by visiting the RSS headquarters in Nagpur and delivering a valedictory address there.

In 2019, he was conferred India's highest civilian honour Bharat Ratna by the BJP government, a development that became a subject of intense political debate.

Ending his political career as president of India, he left his mark on the highest office of the land too.

He will be remembered for the steps he took to make the Rashtrapati Bhavan closer to the people. He opened it up for the public and made it a museum.

The Durbar Hall was refurbished with Mukherjee ensuring during his presidency that events were held under its lofty dome. The library was renovated as well with researchers getting access to its extensive catalogue of books.

Besides, he opened the gates of the presidential palace for writers, artists, innovators, scientists and students through an in-residency programme

The keen intellectual with an avid interest in history, international relations and parliamentary processes has gone. And with him, one more witness to India's growth story and evolution through the decades.