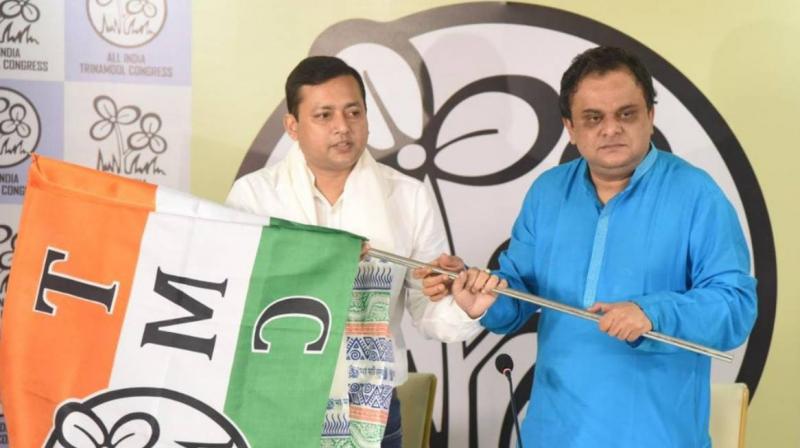 Tanmoy Ghosh's defection brings down the total number of BJP MLAs in the state to 73. (Photo: Twitter/@AITCofficial)

Kolkata: With lavish praise for West Bengal Chief Minister Mamata Banerjee and sharp criticism of his party’s “vindictive politics” on his lips, first-time BJP MLA Tanmoy Ghosh defected to the ruling TMC here on Monday. He had joined the BJP from the TMC ahead of the Assembly polls, got a ticket and won from Bishnupur in Bankura. His defection brings down the total number of BJP MLAs in the state to 73.

Ghosh’s move in the middle of the Janmashtami celebrations has left the BJP stunned, as he became the second party MLA after Mukul Roy, of Krishnanagar North seat, to return to the TMC in less than three months.

The young legislator’s switch also coincides with a hearing into BJP’s disqualification petition against Roy under the anti-defection law that is now going on in the West Bengal Assembly.

Picking up a TMC flag from state education minister Bratya Basu, Ghosh said, “Banerjee is the most popular and efficient leader in the country. The BJP has unleashed vindictive politics across Bengal. It tried to capture the state forcibly during the recent Assembly election. During my association with the BJP, I found it has no organisation at the booth level. Everyone knew the central leadership’s target of achieving 200-plus seats was impossible. So, whoever has won the seats, it was their own charisma and no one else’s.”

On the Central agencies’ ongoing probe in the state, he added: “The BJP is now trying to snatch the democratic rights of Bengalis and destroy their heritage by intimidation through the Central agencies. In protest, I have joined the TMC. I urge all the public representatives, irrespective of their political affiliations, to join our CM and support her famous welfare projects.”

Giving an indication that more defections from the BJP were likely, Basu said: “This proves the discontent among BJP MLAs about their party leadership’s ploy to belittle Bengalis through Central powers. Tanmoy made his appeal to all publicly instead of privately. One should keep in mind that they are contacting us on their own to be with us. But we will decide to pick whom and when.”