An ode to the sari, weaving magic in our lives 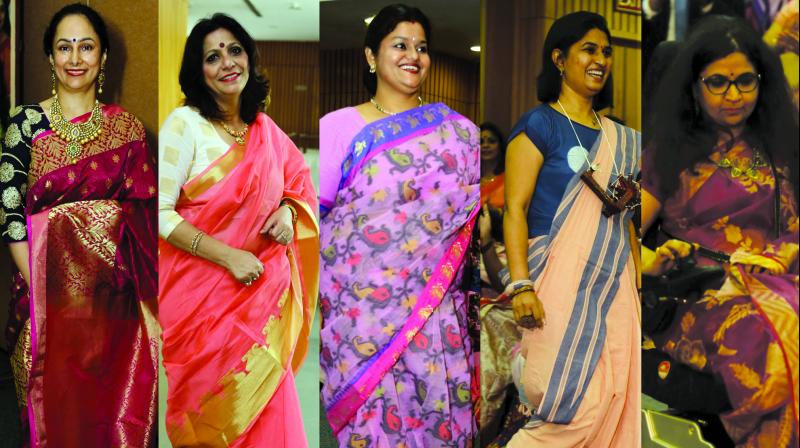 Most will think that I need to get my head examined that I went to Jaipur in this blistering heat. But then I can go to Jaipur in any weather!

It turned out to be such a pleasurable and nostalgic trip. Pleasure because my dear niece Harika, 10, was with me, and is an amazingly organised and good traveller. And nostalgic because I chose to stay at the same hotel where I had inaugurated an art camp way back in 1992 just before the beautiful hotel Rajputana Sheraton was opened.

In between I spent time at the splash pool with Harika, watched Kalbelia folk dancers and wandered around to find artworks that have stayed in the hotel’s quarter of a century long history.

But then my interest in the ITC and the Taj chain is always to seek their artworks. These are two chains who value their art and have put systems in place to look after them.

I missed seeing Ankit Patel’s kinetic sculptures that used to be centrestage outside in the main porch. But they have not been there for several years probably because of the sheer size.

I missed another sculpture that used to be in the main lobby of Rajasthani men and women dancing. I forget the artist. It has subsequently been shifted to another part of the hotel I was told.

I remembered Shona Adhikari, the former corporate communications person of the ITC whose aesthetic sensibilities and artistic bent of mind ensured an amazing collection for the group over the years. She used to organise art camps and handpick the artists and built a collection with great insight. It is a pity that after she retired the ITC has not added too many significant pieces of art. From art their focus shifted to photography that too not to much avail all because a senior honcho was into hobby photography.

Back to Jaipur. Like good foodies, we did order from old-time favourites like the Laxmi Mishthan Bhandar and Niro’s which turned out to be ridiculously over-priced and over-rated and ruined any nostalgia.

I felt for their food. I felt we needn’t have bothered. The several types of cuisine offered at the hotel was fabulous in its multiplicity and quality. Even though this was a private visit and they didn’t know me from any of their other guests, as usual the ITC hospitality left nothing to be desired.

Jaipur is another town where one still sees women sport saris — which is rather heartening for a person like me who derives huge physical and aesthetic comfort from this unstitched cloth.

I tend to go looking for saris whenever I travel in India, and Jaipur is the mecca of the tye and dye. From leheriya to chunri it was all there for the asking in the old city. Found my favourite shops and had a fun time looking for unusual combinations and finding the Rajputi lehengas for Harika. 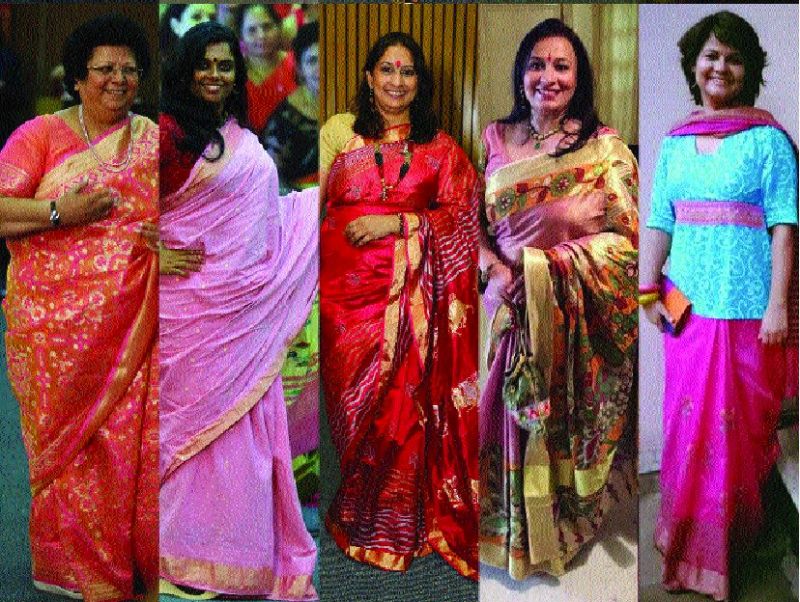 As a founder member of the “Six Yard and 365 days” — a page on Facebook that has nearly 20,000 members, my sari connect has led to meeting many more like-minded women.

Last week, the group had an event to celebrate the magical number of members. author Sunita Buddhiraja posted the highest number of 500 saris.

Speaking at the symposium, she made some valid points about the handloom sector: “It would be important to remember that weavers do not make their own investments in creating saris, processing and buying yarn, dyeing them, designing, creating blocks, printing, etc. Most of them do not even have their own looms. They work with master weavers and trading community on daily wages and create a sari in one day to one month or more. The process involves multiple layers of people and financial investments at every level. There are factors like supply chains also to be remembered.”

Sunita pointed out that the “middlemen” facilitate buying.

“They make huge investments of funds, time and resources and there is a full-fledged upstream and downstream industry that survives because of these so called “middlemen”.

A weaver cannot also pick up his wares and go from door to door to sell these as it is not viable for him too. If they spend all the time in selling when would they weave?”

And she is right. Any weavers’ initiative must remember that we must dispel the myth about the nomenclature “weaving community”, and tell the world that this community consists of several components and each one of these components is an inevitable part of the industry as weavers don’t exist in isolation.

And any weavers’ initiative at the end of the day means finding markets for them. And if the 20,000 members bought five saris annually it would mean one lakh weavers’ chain helped per year. Good logic is that.