Dessert: A timely drama with strong premise but needs rewriting

The play settles into a clash of ideas. We learn that Eddie’s dad was a prosperous businessman who lost his cash in one of Hugh’s investment vehicles. 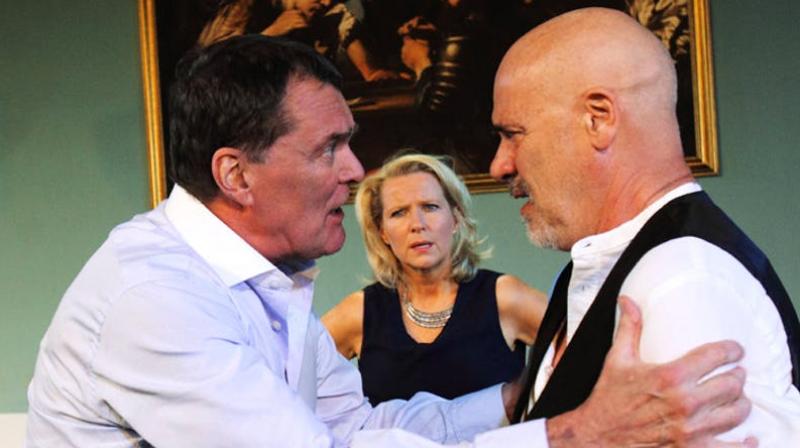 The cast tries their hardest. Michael Simkins manages to inject some life and levity into the doughy Hugh in what is a decent production of a sadly truncated work. Had Elyot lived, he would have rearranged raw materials and created an enduring drama.

Oliver Cotton is an RSC stalwart who looks like a man born to greatness. Google him. He has the fearless jawline of Napoleon, the diabolical stare of Heathcliff, the tumultuous eyebrows of Michelangelo and the streamlined quiff of Liberace.

We’re in a London mansion where smug billionaire Hugh Fennell and his gem-encrusted wife are showing off their latest toy, a Renaissance oil painting, to a pair of rich American idlers.

A gunman bursts in and takes all four of them hostage. Pistol-toting Eddie is a soldier-turned-Corbynista who demands that Hugh shares his wealth with Britain’s struggling hospitals and underfunded care homes.

The play settles into a clash of ideas. We learn that Eddie’s dad was a prosperous businessman who lost his cash in one of Hugh’s investment vehicles. This setback triggered a stroke. There are echoes of Sir Philip Green and the BHS scandal. Eddie joined the military and suffered an amputation overseas and he blames Hugh for his peg-leg and for his dad’s failing health. He also holds Hugh personally responsible for the low incomes of squaddies, nurses, and other public sector wage-slaves. This is nonsense of course.

When Bernard Shaw wrote plays of this kind he always made his characters sympathetic, and he gave both sides (especially the side he disagreed with) the best arguments he could muster.

Cotton disdains this policy. He draws Eddie as an embittered profiteer who became a Trot only when his father’s speculations tanked. Eddie is, therefore, a crashing hypocrite. Yet no one on stage notices this, still less points it out.

Likewise Cotton draws Hugh as a decidedly limited creature. Pretty dim really. When he defends his huge fortune he speaks in arid techno-babble about market forces. ‘Rules are rules,’ in other words, ‘so hop it, chum.’ This is neither dramatic not intelligent. A wily maverick like Hugh (or Sir Philip) would use more subtlety and astuteness. He would reach out to Eddie, discover his weaknesses, cajole him, schmooze him, win him over.

Or, he might just improvise a counter-attack. Poor old Eddie knows very little about the kidnapping. He not only reveals his disability to his prisoners but he leaves the dinner table strewn with glassware and wine bottles that might easily be turned into weapons. This abduction does not make sense, physically.

And the script is confused, legally. It assumes that Hugh would be obliged to honour cheques written at gunpoint. And when one of the hostages launches an assault on Eddie the others accuse him of attempted murder. Haven’t they heard of self-defence and reasonable force?

But the worst problem is that Eddie isn’t just a self-pitying lummox, he’s also a psychopath. His Broadmoor streak expresses itself in mock executions. And Nunn’s direction accentuates our dislike of this deranged loser. Stephen Hagan has been encouraged to play him as a pantomime nutcase, gnawing his lower lip, staring out with zombie eyes, bellowing every line at angle-grinder volume. Blizzards of spittle adorn his hyena shrieks. The result is an alienating and distorted impression of a character who ought to personify the honourable frustrations of all those who’ve suffered from Square Mile skulduggery.

The cast try their hardest. Michael Simkins manages to inject some life and levity into the doughy Hugh. Alexandra Gilbreath and Teresa Banham have been given far too little to do as the fawning womenfolk.

Let’s hope they’re on the same pay as the men. This is a timely drama with a strong premise and compelling themes. But it should have been rewritten, with Nunn’s help, on a sounder dramatic basis. Nunn and Cotton are clearly geniuses in a hurry — both are in their seventies — but that’s no excuse for this rush job.

Kevin Elyot’s last play is a must for aficionados of his work. His language is suggestively lyrical and often very funny. His characters are deftly drawn, quirkily original, surprising. But this first-draft script tries to cram too much into 75 minutes.

Elyot looks at the efforts made by gay men to conceal their orientation by living like heterosexuals. For centuries this obliged gays to marry and to become fathers by letting their wives dally elsewhere. The closing scene shows the last gasp of this tradition being played out in the 1960s. A passionless (i.e. gay) husband looks the other way as his frustrated wife slides into an entanglement with a randy gardener. The scene is wonderful to watch, tender, uncertain and full of concealed pain. This is a decent production of a sadly truncated work. Had Elyot lived he’d surely have rearranged these raw materials and created an enduring drama.