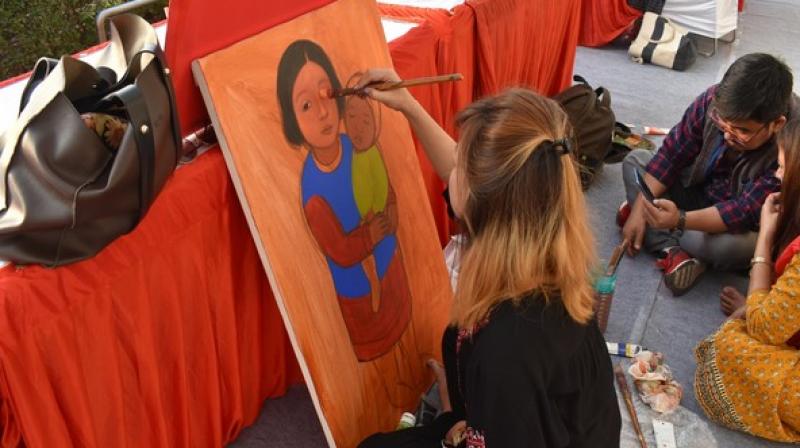 The opening day commemorated with lighting the lamp ceremony by Sisodia. (Photo: ANI)

New Delhi: The 9th edition of the Youth Festival organised by Sahitya Kala Parishad and the Department of Art, Culture, and Languages, Delhi Government under Deputy Chief Minister Manish Sisodia, kicked off on a grand note on Sunday in the national capital. The 6-day long festival will be concluded on December 6.

Appreciating the continuous efforts of the government to uplift the country's youth in making the nation better, Sisodia said, "Youth is the future of our country and we have always kept our faith in the development of the youth and children to make our nation better. We also believe that culture is the best way to reach out to people from any section of society."

Sisodia gave a brief synopsis of the events that will be showcased at the six-day long festival. "Youth Festival will bring musical performances, dance, theatre and many other performances. We are determined to preserve the cultural heritage of the city. Our government hopes to create an environment of harmony and love through such programs. Reaching out to a new audience is important in doing so."

The festival witnessing more than 500 artists as performers is one such big platform that showcases creative and constructive involvement of Delhi's youth along with an exciting lineup of eminent artists. Filled with art, dance, music, culture with a blend laser light show the festival is going to be a much talked about event in Delhi's cultural calendar.

The opening day commemorated with lighting the lamp ceremony by Sisodia. The first act was the Sarod and Rabab ensemble by the disciples of Mukesh Sharma. The Anandam group dwelled in the patriotic spirit and presented Raga based popular songs and mantra-like 'Vande Mataram,' 'Vaishnav Jan,' 'Ekla Chalo Re,' 'Sare Jaha Se Acha,' 'Raghupati Raghav' and 'Gayatri Mantra.'

The heart-touching performance was followed by a cultural performance by institution Tapaswani Navsadhana, a non-government, non-profit making society that runs primary schools and vocational training centres for all including differently-abled and underprivileged children. The society performed an act 'Mein Gandhi, Mujh Mein Bhi Gandhi'. Later, a special Bharatanatyam dance was performed by Abhinayaa Group of Jayalakshmi Eshwar

Slowly towards the evening, the first day ended with a Street Play by Parikalpana Cultural society, contemporary dance by Shivam Chauhan, and a band performance by Ekagra, a fusion Indian rock band. They kept the audience on their toes with their forte in Sufi & Bollywood with a twist by adding a little rock in their own style.