These are where Balan's ritual photographs are on display - a first here in the city, which has never seen his proficiency with a camera. 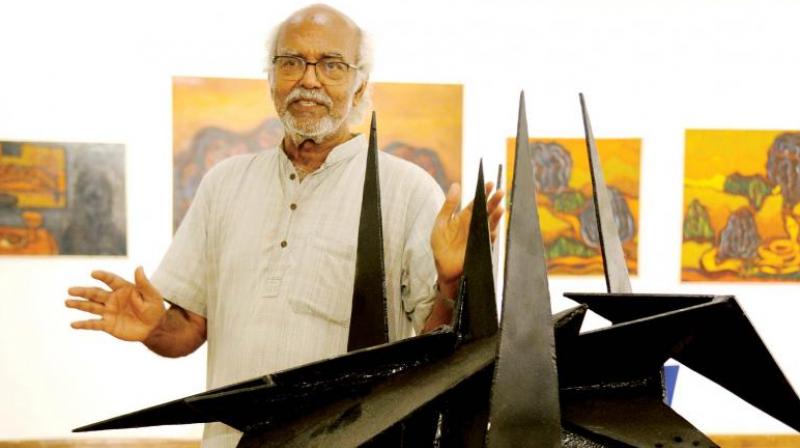 Balan is at the National Gallery of Modern Art on Wednesday afternoon, where a group of young artists (his students) rush around to help set up. (Photo: R. Samuel)

The scents of tulsi and turmeric draw him in, making him feel like he is a part of the rituals he is there to see. And in that moment, one almost imagines the fragrance wafting through the air as Balan Nambiar, one of India's most celebrated artists and sculptors, describes the forces that draw him back into the annals of Indian history, religion and art. The contemporary and the ancient come together at Sculpting in Time, Balan's retrospective, a mammoth undertaking that will showcase 60 years of his work, curated by Sadanand Menon.

Balan is at the National Gallery of Modern Art on Wednesday afternoon, where a group of young artists (his students) rush around to help set up. Sculptures, still wrapped in protective plastic, stand imposingly in the centre of the room and the walls are already covered with paintings. Balan heads first to a corridor at the back - there is a stillness here, some distance away from the din that surrounds us. These are where Balan's ritual photographs are on display - a first here in the city, which has never seen his proficiency with a camera. At an earlier visit to his house on Nandidurg Road, when he was very much in the throes of his fascination with the lens, Balan and his DSLR weren’t easily parted "This is the first time Bengaluru is seeing my photographs," he smiles. "I'm sure a lot of people don't even know I do this!"

The Theyyam dominates the set of photographs - it was Balan's first brush with Indian ritual art. "I was about a month old when I was taken to my first Theyyam, where my mother made an offering in my name," he smiles. Growing up, he found himself immersed in the local traditions and beliefs of the villagers in Kannur, where he lived. Every ancestral home had a deity of its own and Balan would appeal to the divine too, every time the opportunity presented itself. "I would pray for good marks in an exam," he laughs, adding, "I got them, too!"

It was perhaps, logical, that Balan would head back to ritual art that fascinates him so. The Nagamandala or snake motif, Bhuta or masks, Theyyam and other rare rituals are subjects of research for Balan - these papers have been published by different sources across the world.  "The snake motif has always fascinated me, for it exists in every culture around the world," he continues. "It is a common misconception that the snake is a symbol of evil in the West - that is not true. In India, too, Shiva wore a snake draped around his neck, while Ganesha had one coiled around his stomach like a rope." There are darker rituals, too - he pauses beside a photograph, saying, "This is something you will never see in your life!" A closer inspection reveals a man in a trance, biting the head off a live chicken, whose meat he would then consume. In another ceremony, a man drinks the blood of a goat.

Oil pastels and sketches - the latter series is comprised mainly of nudes, make up the adjoining section. "The sketches are all done with models," he points out. One wall is covered with intricate drawings of masks, another one of Balan's passions. These have been collected from around the world - he points out Japan, China, Africa and Sri Lanka. "The act of wearing a mask is the point of departure from who we believe ourselves to be. Even in the Theyyam ritual, the dancer wears his mask and meditates before a mirror to enter his trance."

By the entrance hang two very special works: The first, a Landscape in blue, is his first ever oil painting - "It was part of a group show and a journalist covering the event mentioned it in his story, which was so thrilling for me!" This was back in 1963, four years before he joined the College of fine arts. The other, a pen and ink sketch, is Balan's first ever work, done back in 1957, which fetched him award some five years later at the Dussehra Exhibition.

Sculptures lie spread out across the small compound to his house, where workers add a finishing coat of black paint.  From Salman Rushdie to Irving Stone, a Ramkinkar Baij retrospective, books on ancient rituals and poetry line the glass shelves in his study; a row of birds' nests - Balan is fascinated by the weaver bird - are suspended on the wall facing the doorway. He hurries out his study and returns, holding a couple of catalogues. "Here, read this one. It has two very excellent essays in it. One is by me, of course." He accepts, with total good humour, the burst of laughter that follows this remark. His is a philosophy of utter candour: "If people ask me what I do, I say I am a welder. It's true, I do the welding myself! I'm being honest, no?"

Sculpting in Time is home to a tremendous body of work, detailing Balan's progress over the last 60 years. He began with ink drawings, moved to charcoal, oil pastels, watercolours and finally, to oil painting. The sculptures are made from cement, stone, bronze, mild steel and stainless steel. Balan also has an extensive body of enamel and jewellery enamel paintings, a craft  he studied under Paolo di Paoli, regarded as the greatest enamel painters of the age. di Paoli's daughter, Balan's wife Eva, saunters into his study with cups of tea and perches herself atop a wooden crate of enamels. "I will pack these on my own, I guard them jealously," she smiles. The enamels are made on a bass of copper, filled with powdered glass, colour and baked by layer, at varying temperatures. "Not too many people understand this process, that's why I will see to them," Eva remarks.

Balan's work is rich in motifs, and references to ancient culture, rather beyond the grasp of layman, perhaps. He agrees, quoting Picasso: A serious work of art is not meant for ignorant innocence. "I don't work for the layman. I want the person to be elevated to my level through my art. Yes, I appreciate individuality, but I'd rather my audience met me on my level, rather than me having to stoop to theirs." This is not meant to sound dismissive in any way - Balan has lived this philosophy for decades, conducting free art classes every week. "I want to impart my knowledge," he says emphatically.

Over 2000 children have passed through his hands, with proteges like Pushpamala N finding international fame through art. "I don't expect them all to be artists," he says. "They will, at the very least, become a perceptive audience." His oldest student is currently 57 years old, the youngest is seven. The students will breathe life into the exhibition: "I don't want VIPS boring anyone with speeches. My students are my VIPS. There is no room for VVIPs - apart from me, of course, I'm the VVIP!"

Through it all, Balan returns to one point: The arduous journey itself. His own rise an artist was marked by hardship - despite the support of the late KCS Paniker, one of the pioneers of the Cholamandal art village. "All this is a process. I want people to understand that I have not arrived here overnight. It has been decades and decades of very hard work and constant learning."

This ethic he laments, seems lost in the annals of time: he recalls an anecdote, one that's clearly displeasing, to elucidate. "A young artist is only allowed in my house after he or she has given me a portfolio of five original works," he says. "I was asked to conduct a workshop for 15 art students and when I laid out my conditions, which included non computer generated images, not a single one showed up. The making of an artist lies in rising to meet challenges and refusing to give up even if it seems like the end of the road.” 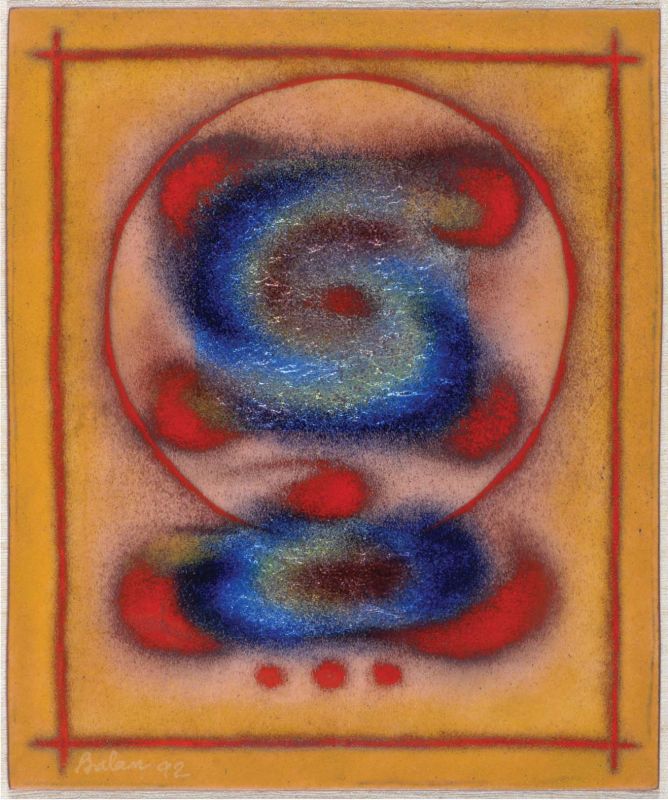 A serious work of art is not meant for ignorant innocence.

What: Sculpting in Time, a Retrospective of Six Decades of Balan Nambiar's Engagement with Materiality