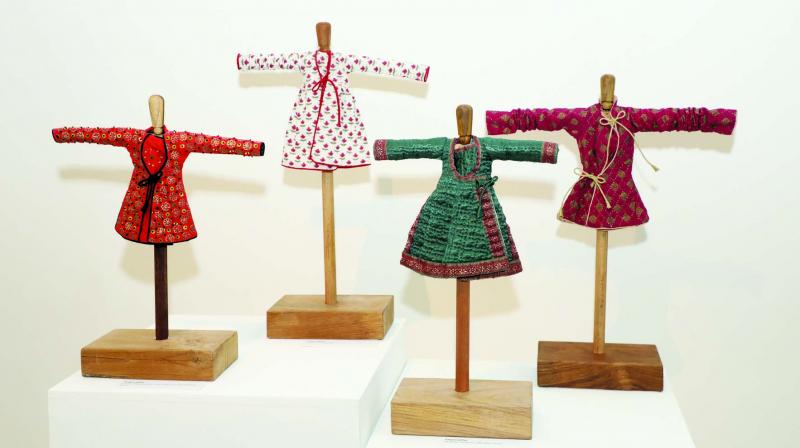 Geeta was inspired by the variety of fabric used in the Maharajas’ costumes.

When textile artist Geeta Khandelwal got bored of making quilts, which she has been doing for the last 40 years, she opens a book titled Indian Costumes In the Collection Of the Calico Museum Of Textiles and got inspired by the costumes worn by the Maharajas of India in the 19th century. Geeta then decided to make miniature versions of them to scale. “I was quite bored of making quilts, and one day I thought I should make something different. Since I like making garments and have a feel for textile, I started to make men’s garment in miniature through scale. It was a challenge for me, because I started a new trend of giving tribute to the historical costumes of Maharajas, but at the age of 75” says the artist.

Geeta was inspired by the variety of fabric used in the Maharajas’ costumes. “This is from the 1850s to the 1950s, India is very rich in woven textiles, in hand block, printed textiles, in cotton, in silk, in brocade, jamadar, mashru. So the Maharajas of India patronised some of these weavers to make their everyday wear aka choga, or angrakha for the festive occasions,” says the artist, adding that she sourced fabric from local weavers to get the authentic fabric and print to match to those worn by the Maharajas.

Geeta decided to explore the royal men’s wardrobe exclusively, because she feels women’s costume has been explored enough. “Women’s costumes have been made by many designers all over India, and sold for wedding trousseau and festive collections for very high expensive prices, using our karigars and our skilled artisans to make them,” she opines. “I started to make miniature garments only for men because men and Maharajas were in the forefront in those years, they were the ones who were exposed and shown to the public,” she adds.

The artist, who spent three years creating the exclusive collection, hand-stitched most of the costumes, paying close attention to the pattern and hemming. She also added knob buttons, tassels and embellishments. When asked about the challenged she faced, Geeta says: “The most difficult part is putting on the sleeves and the collar in tiny stitches, which could be six stitches to one inch because those days no machines were used. We’ve kept to that style of working. No tailor was willing to make such tiny garments because his fingers won’t fit into the sleeves, and they were asking too much money. It was easier for me to make them,” she says.

While some garments are hand-stitched to stay true to the original style of the Maharajas, others, which were influenced by the British, were not. The 80-year-old reveals that her secret to having patience in creating these tiny costumes is, “Because I live alone, and it’s a passion, I love stitching and it’s an integral part of my life to stitch.”

After the first exhibition in Mumbai, Geeta plans to showcase it at more exhibitions in India and abroad. “They will go round India and maybe around the world, and finally, I will donate it to a museum that can take care of them,” shares the artist.

As a textile enthusiast, Geeta collects fabrics from local weavers on her travels and has stored them safely. However, she isn’t sure if they will feature in her collections. “I haven’t planned anything; it depends on what fabrics are available. But most of them are there in my treasure trove at home because I’m a collector… maybe I’ll do some Japanese costumes,” she concludes with a smile.