Jewellery in the times of peace

The setting of stones in the southern part of India is completely different from that in the north. 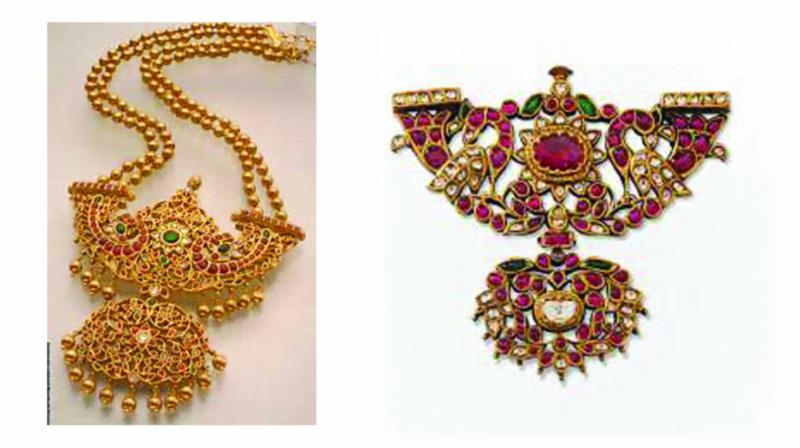 Peacocks in ruby setting (left) and peacocks on a pendant

Peace is a necessary pre-requisite for the development of art and craft. Nowhere is it more obviously evident than in the workmanship of jewellery. In the context of India, it’s in the South.

It is said that peace is a necessary pre-requisite for the development of art and craft. Nowhere is it more obviously evident than in the workmanship of jewellery. In the context of India, the South, which has, relatively, not been wracked by wars, jewellery too has been insulated from the vagaries. The designs are marked by detailing that is region specific. This is also obvious in the weight of jewellery from that part of the world where plenty was a way of life.

Even today, it is not uncommon to see the average South Indian women decked in an array of chains and other rather interestingly crafted pieces, the burnished gold glinting with grandeur on their ebony bodies. The most popular piece of jewellery sported by women are the mind-boggling variety of mangalsutras — or thalis — as they are known South of the Vindhyas. Each sect seems to have a different one — or at least a different combination for each sect! Usually worn in a pair, the thali designs and shapes vary from region and caste and could be any shape from being a perfect round to a phallic “M” shaped one to that of a hand with outstretched fingers. One of which must come from the bride’s father and the other from the in-laws. Essentially fertility symbols, the thalis denote the caste hierarchy of the woman and her family. While some sects use a pair of black beads to ward off the evil eye strung into the thali thambi, some use coral beads. In Kerala however, the thali is tear drop shaped and worn singly.

The most spectacular jewellery from the South is easily the mangaimala, literally meaning a necklace of mangoes. And the mangaimala is exactly that. A row of paisley or mango-shaped pendants are strung usually on a flat chain to sit at the base of the neck like a row of mangoes. Often inset in the temple jewellery style closed setting, the mangaimala can be practically any colour that catches the fancy of the creator and the wearer – there exist turquoise blue mangaimalas! Most mangaimalas are rather heavy as each pendent needs to be crafted individually.

Vying very closely for the second slot is the Lakshmimala or Kasumala which is a  fascinating piece of jewellery for two reasons — the subject and the sheer range of its availability. The Lakshmimala comprises coins embossed with an image of Goddess Lakshmi — usually in the most auspicious sitting posture. A number of these coins are joined in a setting where each coin is overlapped by the next one and at the top of these coins, is filigreed lace of gold to hold the coins in place. The size of the Lakshmimala can vary from being worn at the base of the neck to the almost reaching the navel. The weight too varies between the feather weight coins to some pretty solid ones, equivalent to real currency!

While there is no dearth of designs, some of the more accepted ones deserve mention for the simple reason that one finds a fascinating reoccurrence of the same designs with little or practically negligible variation in the design and some in the size and weight. Another popular piece is the conjoined parrots or swans necklace, even if it is more often seen as part of what is known as temple jewellery. The design is that of a pair of parrots or hamsas or swans facing each other, joined at the beaks, with their plumes spread out in a spectacular display. This heavy pendent is held in place with two rows of pearls. Inset with uncut rubies and emeralds, the piece looks rather magnificent.

Makaras or crocodiles are another trendy motif. A pair of makaras are joined together with a ball in their open mouths. This design finds favour for necklaces, bangles and bracelets alike. Fascinatingly enough, lions are another fashionable motif especially for bangles. Flora is perhaps the ever fashionable inspiration. From earrings to nose pins to necklaces and bangles, flowers in their amazing selection are forever trendy and visible as variations of flowers abound, albeit frozen in gold and inset with stones.

The setting of stones in the southern part of India is completely different from that in the north. Here the claw-shaped or clove-shaped setting popular in the north is given the go by and the closed setting abounds. Which means that a case is made in which the stone is set and the gold is then folded on top like a border to keep it in place. The craftsmanship is in ensuring that the setting is so clean that it does not permit even water to enter behind the stone. As for gold, various types of workmanship is available – from working with sheet gold to nakashu or repousse or relief work, the craftsmen are clearly adept at working with any type of style.

Of all the ornaments, the vanki or upper arm ornament is perhaps the most eye catching. The designs vary from the simple arm bands to the v-shaped designs – which are incidentally seen in the toe rings and finger rings as well. The design can be flower creeper or a central motif of the mythical lion head of yali, executed over a large cabochon ruby. On either side of the yali a rich array of peacocks, lions, birds and floral patterns are etched. In the jewelers parlance, vankis bear a jeevan rekha, or life line, a term employed to describe the perfect proportion and dimensional depth of the ornament.

In the Rajput-dominated Coorg region of Karnataka, come two amazing designs for necklaces. One of the crescent moon with breast shaped edges, a symbol of fertility, worn in either a heavy gold chain or a string of rubies. The other one is in the form of the naga or the snake. In Coorg, the snake is revered for its deadly power and is propitiated as a symbol of wealth and fertility. These designs are starkly simple yet stunning in their impact. One piece of jewellery from the Coorg that deserves mention are the rather elaborate payals or anklets, worn by brides at the time of marriage. Emanating from the ankle, they radiate with thick silver chains to each toe and culminate into a toe ring, each of a different design symbolizing fertility and plenty.

Some ritualistic jewellery from in and around Madurai in Tamil Nadu is in the form of bangles and thandatti or earrings. There is usually a complex juxtaposition of geometrical forms including spheres, cubes, and rectangles of hollow sheet gold that are almost post-modern in terms of design. They symbolize yantras, or geometrical representations of magical incantations chanted to propitiate the gods.

For earrings a million variations abound! Starting at the tip of the ear with the bugadi, the entire ear can be bejeweled at every step, culminating into the jimaki which resembles a flower in full bloom and attached to the hair ornaments which too have some interesting motifs. The sun and crescent moon, worn on either side of the hair parting were rather trendy at one point, however, they are now mostly worn by Bharatanatyam dancers now!

The nose pins in south India have some beautiful variations. Flowers and swans are still the most popular motifs and as they were worn on either side of the nose and a ring-like variation in the middle, there were many opportunities for the craftsman’s imagination to soar. Who can forget M S Subbulakshmi’s nose pins glinting in the darkened auditoriums as she sang her heart out to Krishna? It was an ode to the blue jacquard diamonds she sported, like many of the other upper caste women from her generation.

Gone are the times when one could identify where a woman came from by the jewellery she wore – global designs have sounded the death knell of that identification at least in the urban situation – but still the regional variations that made Indian jewellery, especially in the southern part, a virtual storehouse of design still exist and thank god for it!