In order to explore the aspect of neverland, a group art exhibition titled ‘Notions of Neverland’ was recently organised at Gallery 1000A. 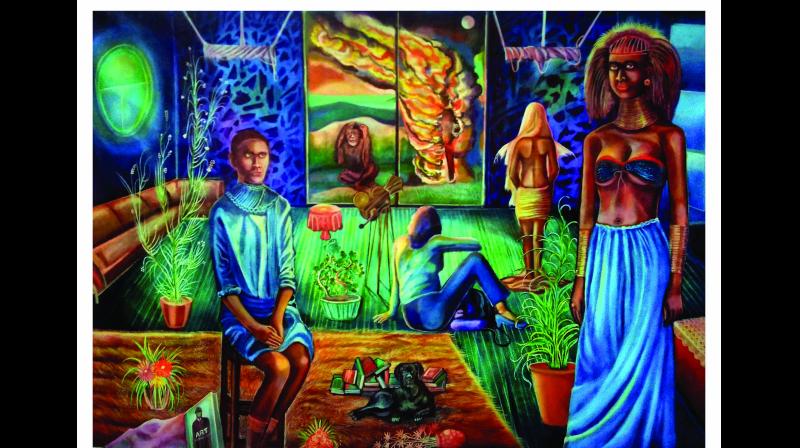 The Directors Choice by Sukesan Kanka

An exhibition showcasing contemporary artwork by 15 artists from across the country was held in the capital. The show represents the emotion of an artist which is an experience of one’s life next door.

One must have been familiar with the concept of neverland, it is a place where there is no end to dreams and imaginations as they can stretch far beyond the length of the sky.

In order to explore the aspect of neverland, a group art exhibition titled ‘Notions of Neverland’ was recently organised at Gallery 1000A. The show exhibited artworks by 15 artists from across India took place in the national capital. To name a few; Bose Krishnamachari, Farhad Hussain, Josh P. S, Krishna Murari, Mukesh Sharma were among the 15 artists.

One goes to an unplanned and uncharted terrain of dripping lines and slipping colours. “It represents a wonderland where colours do not fade, a dream does not die and actions do not end, time does not move despite the clock ticking by,” expresses Shaji Punchathu, the curator.

Shaji adds, “This show is not about an intellectual or aesthetic exhibition but also the experience of one’s life next door. Some who stand under street lights displaying their embroidered beauty.”

The curator believes that it is important to preserve the cultural heritage along with identifying and promoting young talent in fine arts and says, “The vision of the exhibition is to organise existing masters exhibition and documentation of their work in videos and conducting seminars while giving platforms for young artists with masters on the national level.”

On the works she believes, “Some who reveal a sense of daring in photographs with their smiling eyes and their feet braced apart is a challenge, a question mark was thrown at the world some who are gnomes and some who being gnomic.”

P.S Josh, one of the artists on display, revolves his work and style around conceptual minimalism and realism and the work he captures represents the essence of history in a form which carries memory and data. Joshi talking about his medium, says, “I work extensively with range mediums. Oil on canvas, watercolour, charcoal, oil pastels and many sculptural mediums like wax and bronze.”

Whereas Sukeshan Kanka whose artworks revolve around the semi-realistic approach, expresses, “I am really inspired by the world of classic cinema and the history of Renaissance masters such as Durer, Bosch, and Cranach and the medium I use is oil colour.”

One of the standout painting Kanka was titled ‘The Director’s Choice’ which is the depiction of a spike in violence in the society from the perspective of an artist.