Sudhir Duppati, brings together six global artists for an exhibition, four of whom are from Hyderabad. 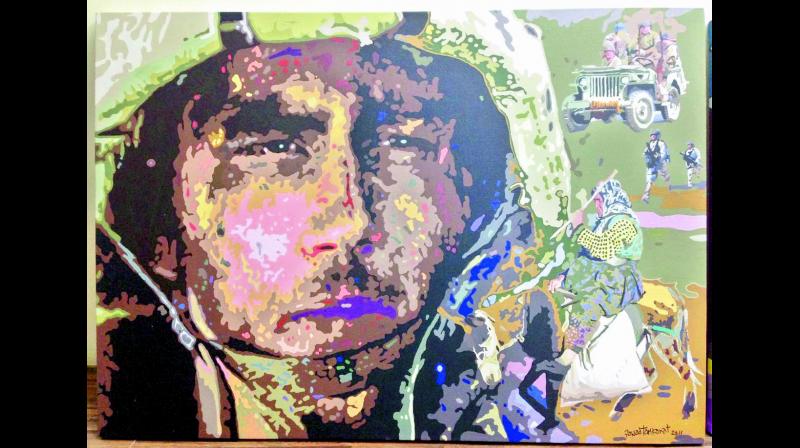 Soldier: One of artworks by artist Fawad Tamkanat on display at the exhibition

Hononga is the ongoing first international exhibition curated for the Marlborough Art Society Gallery, New Zealand, by Hyderabad-born artist Sudhir Duppati. Connecting various mediums and artists, Sudhir, the curator of the exhibition and the president of the art society, brings six artists from across the globe to display their works in the exhibition. What’s more, of the six artists, four have roots in Hyderabad.

‘Hononga’ in Maori means ‘connection’, something Sudhir uses in the exhibition to bring together the exotic, diverse, and contemporary through artworks of his friends and colleagues from various cultural backgrounds. Artworks of Fawad Tamkanat (India) and his Australia-based daughter Afza Tamkanat, Ermias Ekube (Sweden), Sreekanth Kurva Bolla (India), Pramod Reddy Gade (India), Kandi Narsimlu (India) and Sudhir aim to introduce the artists and share the cultural experiences through their art.

“Some of these artists are connected to me as philosopher friends and associates since my teaching tenures while others were classmates, who studied visual arts in college days back in Hyderabad and Baroda,” says Sudhir.

Sudhir then shares with us that his idea with the exhibition was to bring together a show that is diverse in nature. “These artists span across various countries and expressions. This show is also to establish and promote an international perspective of different artist exhibiting their different cultural backgrounds within our New Zealand context. I am planning to take this show to other cities in New Zealand as well.”

The curator of the exhibition also tells us that he didn’t want to curate the show along the lines of any theme. “That’s because it would have curtailed their style and creative liberty-all of them have their signature styles and I thought it better to highlight those. Moreover, the response from the preview show was good and very encouraging,” he says, adding that some New Zealand-based artists also have come forward with a request to exhibit their works in India as well.

Indian stories on a canvas

We reached out to Fawad Tamkanat to tell us about his participation in the show. “Sudhir is my junior from our JNTU days, so when he approached, I was only happy to participate in the show,” he says, then talking about how the show enables him and the others to showcase their works in front of an international audience.

For Fawad’s daughter Afza, it took just one call from Sudhir for her to get on board with her personalised journey of the memory lanes of Hyderabad, her native city. “I showcase three artworks — two from my usual take on Hyderabad’s streets and the cultural iconic objects painted with coffee as a medium with layers of monochromatic shades,” she shares.

Sreekanth Kurva, who is mainly inspired by animals on the street and in the flea market near his Begum Bazaar home in Hyderabad, will display a bit of his native land in New Zealand. “Sudhir and I are classmates from our BFA days. Even though he resides in New Zealand, we make it a point to meet every three years,” says Sreekanth, who is showcasing his small and medium works in paper collages.

Another participating artist, Pramod Reddy Gade, is a trained mural artist and a classmate of Sudhir, who draws his inspiration from Hindu mythology, mainly the Ramayana and Mahabharata. We are told that he has exhibited widely across the globe although this is his first show in New Zealand.