The hues of democracy

Artist Ajit Kumar G.’s interpretation of ‘Liberty Leading the People’ can be seen on a wall of the University Stadium in the capital city. 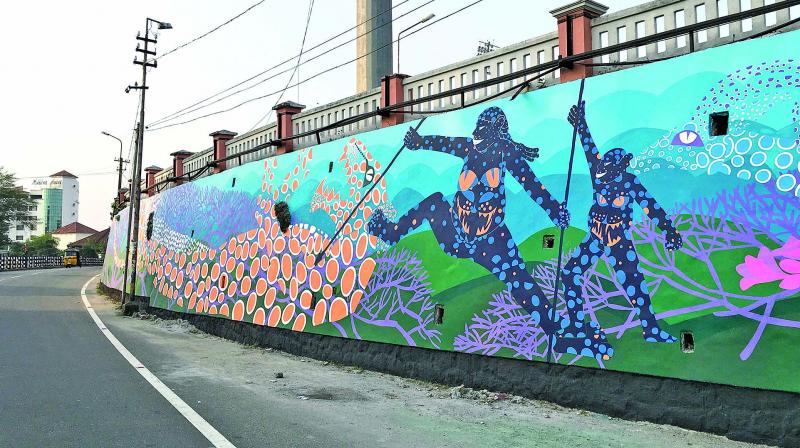 It is a Thiruvananthapuram Corporation initiative, funded by SBI as part of Swachh Survekshan, a central government initiative.

There are a number of fallen bodies on the ground. A woman appears to walk over them, holding high a tricolour flag in one hand, and a musket in the other. Behind her are a bunch of people, resisting something, and with her is a child, wielding two pistols.

Those who love art would recognise this as the 19th century painting ‘Liberty Leading the People’, made by Eugene Delacroix, on the July Revolution in France in 1830, overthrowing one monarchy to be replaced by another. Dr Ajit Kumar G. loved art. He knew this painting so well he was inspired to reinterpret it for a wall in his hometown — Thiruvananthapuram. The wall of the University Stadium, opposite the Legislative Assembly, now has Ajit’s mural painting of a woman and child, but a world apart from the original Delacroix. It is a Thiruvananthapuram Corporation initiative, funded by SBI as part of Swachh Survekshan, a central government initiative.

“The idea was to base it on democracy. The Mayor wanted it, and I chose to do this,” Ajit says. He painted through late nights to finish the painting last week, two figures in deep blue shades killing a leopard with spears. “You can’t identify the figures as what colour they are, what social strata they belong to or what race. They are primitive, they can be anyone, resisting the force – the power, represented by the leopard,” Ajit says. Democracy is not granted, he says. No one is going to come and say all people are equal, let them all have opinions, the land is for everyone. You will have to resist the centralised powers. “But these days it is going in the reverse order. People seem to admire leaders like Trump and Modi and Kim Jong-un, like they once did Hitler. If before, we resisted the centralised powers, today we appear to depend on the authoritarians. It is happening in every continent,” he says.

Delacroix had put a woman, personifying the Goddess of Liberty, at the centre, to lead the people. Ajit too has put a woman in his painting, standing over the leopard she has killed. And a child too. “Women and children are often the most discriminated against in any society, they are at the suffering end, war or riot. Their rights too are given secondary importance. So in place of men leading, I put a woman and a child in the centre,” the artist says. He only has a Dr in front of his name, Ajit left his doctor job to be completely involved in art. He has had many exhibitions across the country and was curator for Arteria – a Kerala Tourism initiative to turn city walls into art canvases.  He is now busy with another big project — converting the Thekke Kottaram (South Palace) in Shanghumugham into an art museum. Ajit is artistic director for the project. “The museum, which will have only curated shows, will open in the first week of May,” Ajit says.