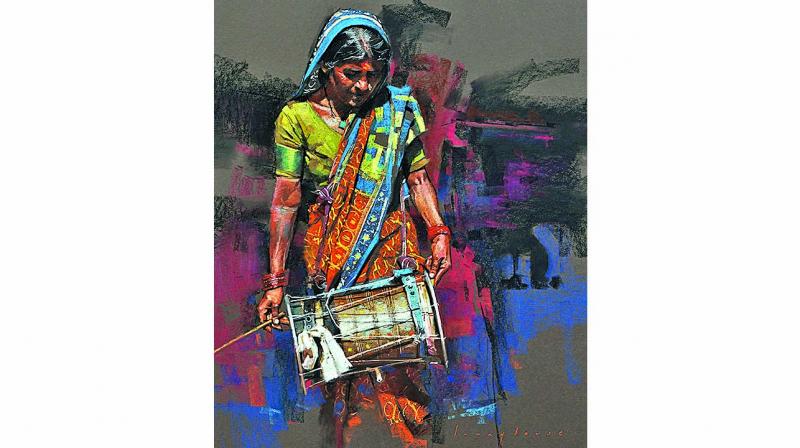 A graduate of JJ School of Arts, it was his time spent at the art school that made him realise how close he was to this subject.

Karjat-based artist Parag Borse’s fascination with portraying village life in vibrant pastel hues depicting Marathi ethos has won him several international accolades and awards. Having surrounded by mountains, trees, and farms since childhood, he didn’t have to go far for inspiration.

Borse’s portrait of a shepherd with handlebar moustache and his forehead smeared in turmeric paste donning an orange turban was selected at the 47th Pastel Society of America, and was also on display at the National Art Club, New York. While last year, his interpretation of sari-clad women from the Pardi community playing the dholki won him an award as well.

A graduate of JJ School of Arts, it was his time spent at the art school that made him realise how close he was to this subject. And a read through author Venkatesh Madgulkar’s Bangarwadi gave him his muse. “We had to pick a topic in our final year, and that is how I got reading the book that talks about the village and lifestyle of the shepherd of Maharashtra. I went and spent time with the shepherds, sketched them, especially the male’s turbans and the women’s costume. Right from a cover to the story, I re-narrated the book through my art,” reminisces Borse, who worked with watercolours and charcoal at that time. 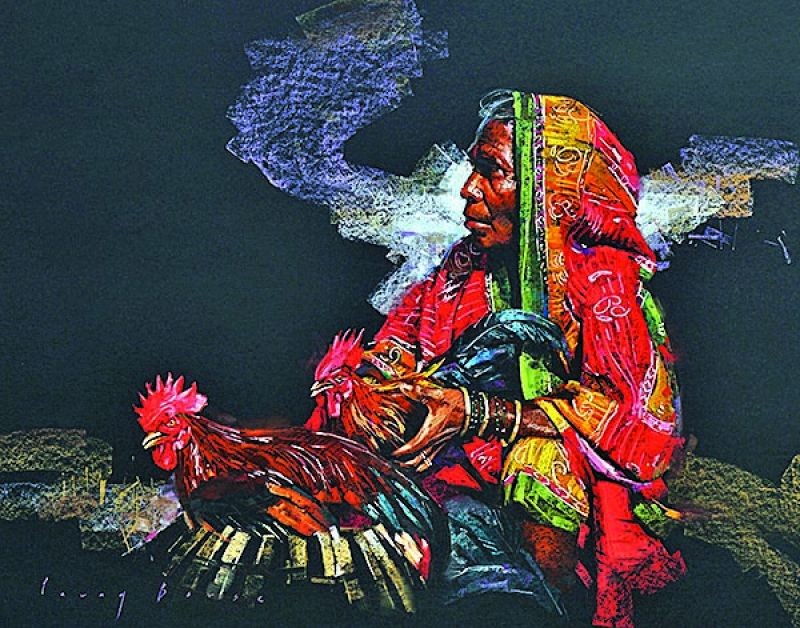 Getting closer to the subject took him to the far of villages around Karjat, where he met women selling chicken. Taking this characterisation to his canvas, in 2018 he was the only painter from India to have won the highest prize at the Pastel Society of West Coast of America. “I sent the painting of a woman in a green and blue sari selling chicken. I won their highest price of $2300,” shares the 38-year-old.

Adding another feather to his cap, Borse is one of the only painters from India to have been featured in International Artist Magazine three times in a row. “I felt strongly for the women trying to make the ends meet by selling chicken, and the subject spoke strongly to me. I racked my brains for the kind of composition I should paint them in,” he shares. Borse also happens to be the only Indian artist to have won an award at The Pastel Journal, making him one of the first five artists from the world to be recognised.

Ask him about the medium, Borse shares that switching to pastels was a chance encounter when he witnessed the strokes of vibrant pastels giving him the exact effect of sketching. “The turban colours and the turmeric paste came out right in pastels. In fact, it is an easier medium than watercolours and pencils. Applying pastel on the paper made me happy,” shares the painter.

As for the compositions, Borse explains that they are spontaneous and start to flow the moment he picks up the brush. “While painting, even I can’t decide. I often say that I don’t paint, it just happens. If I have brushed a stroke of red, a voice from inside tells me to pick the blue. I believe an artist is in constant communication with the painting,” he says.

Looking back at his roots, Borse recalls that had his biology teacher not taken notice of diagrams sketched to perfection, he wouldn’t be here. “I had science in school  but enjoyed sketching the diagrams in biology. With the teacher’s encouragement and family support, I am glad I pursued art. I will continue to work on my interpretation and put Indian on the world map of pastel art,” concludes the artist.