Looking beyond the door

Artist B. Srinivas Reddy talks about his art installation that depicts the second period in Lord Buddha’s life. 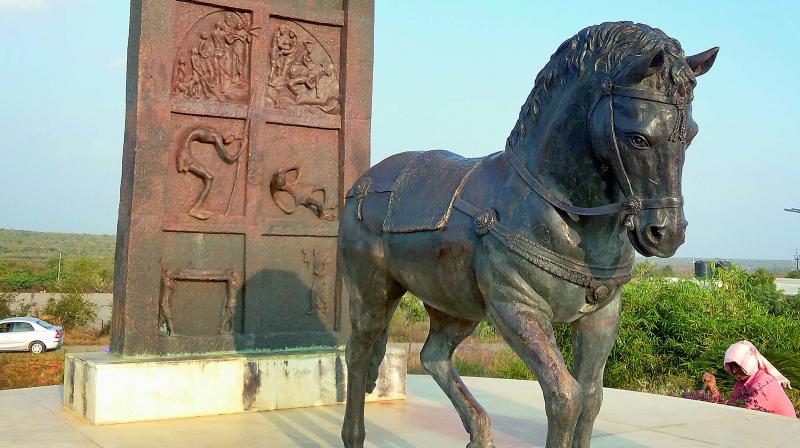 The art installation near Nagarjunasagar

If you’ve visited Nagarjunasagar in Andra Pradesh  recently, chances are that you might have spotted a 10-foot tall installation of a bronze door, and an 5-foot high horse statue that stands in front of it. And artist B. Srinivas Reddy the man who created it, was among five artists from across the country who was selected to create these art pieces.

“When the Stupa in Nagarjunakonda was being restored by the government, they wanted to put up art installations related to Buddhism. The government then contacted several artists from across the country and five were chosen based on their concepts,” explains Srinivas Reddy.

The five artists worked on each of the important periods of Buddha’s life. Reddy’s work depicts the second period, when Prince Gautama leaves his worldly pleasures. This is know as The Great Departure (Mahabhinishkramana), where the Prince mounts on his favourite horse Kanthaka, and leaves the city.

“I was inspired by the famous sculpture, The Gates Of Hell, by French artist Auguste Rodin. The door here, symbolises how Gautama renounced the world and left behind his luxurious life. When the Prince is moving on, he also leaves his favourite horse and that is why the sculpture of the animal was made. In fact, the installation is yet to be completed. After its completion, one will be able to see the footprints of Buddha leaving the horse and moving towards the forest,” explains Reddy.

While the back of the door has Prince Gautama’s luxurious life sculpted, the front part of the door depicts the suffering he witnessed. “The installation, in a way, is a metaphor for how  he shut the door on one part of his life to move on to the other,” he says. Though the idea was conceptualised in 2005, the sculptures were ready in 2012. “Once the stupa is renovated, the installations will be inaugurated,” he adds.