Weaving and fibre arts get the new MoMA treatment. 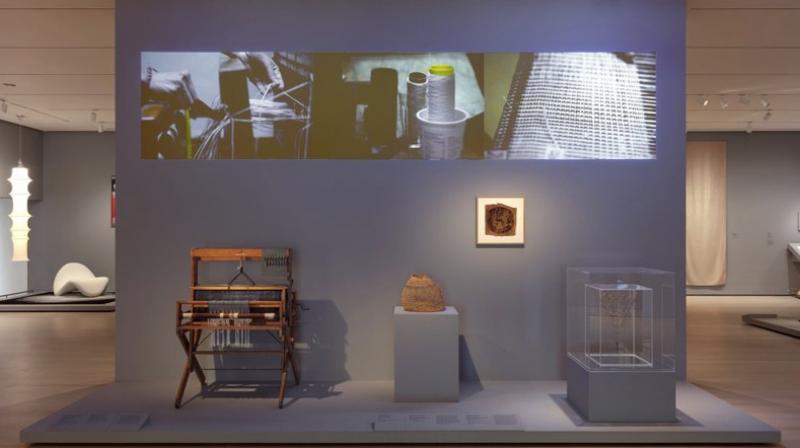 The exhibit takes its name from a quote by artist and Bauhaus professor Paul Klee, who advised approaching drawing by “taking a line for a walk.” (Photo: AP)

New York: Modestly sized but expansive in scope, the exhibit “Taking a Thread for a Walk” in the newly revamped and enlarged Museum of Modern Art explores the often overlooked art of weaving.

With a nod to weaving in ancient times and at the dawn of the Industrial Revolution, it goes on to tell how a small group of artists, some of them women sidelined by the more famous men in the Bauhaus movement, pushed the age-old craft in new directions. It developed a more sculptural approach, known since the 1960s as fiber arts, even as it continued to evolve as an industrial art.

“The textile media have been underappreciated for many years, and there’s definitely a renewed interest now in textiles as taking functional, sculptural and architectural forms,” says Juliet Kinchin, who co-organized the show with Andrew Garner.

This exhibit, one of the inaugural exhibits of the new MoMA, opened to the public when the museum reopened on Oct. 21, and will remain on view through April 19, 2020.

Although textiles don’t immediately spring to mind when you think about modernist art, Gardner points out that artists as varied as Le Corbusier, Matisse and Miro all created works in fiber.

The exhibit takes its name from a quote by artist and Bauhaus professor Paul Klee, who advised approaching drawing by “taking a line for a walk.” At the multi-disciplinary art school, where Anni Albers studied and taught textile design to a generation of young artists, that spirit carried forth to weaving.

“Just as it is possible to go from any place to any other, so also, starting from a defined and specialized field, can one arrive at the realization of ever-extending relationship . traced back to the event of a thread,” Albers wrote in 1965.

The show includes Albers’ tapestries, gouaches and screen prints from the ’20s through the ’80s, and even a 1950s loom of hers, as well as video footage of weaving being done on her loom, to give visitors an appreciation for the complexity of the art.

“It’s a very mathematical process, and there is no placement of a thread that is accidental or out of place,” says Gardner.

The exhibit opens with a look at the history of weaving, with an ancient Coptic tapestry fragment dating to between the 6th and 8th centuries — not the type of thing one might expect to encounter in a MoMA exhibit. It was donated by none other than Lillie P. Bliss, one of the three founders of MoMA.

“There was a modernist obsession with looking at the ancient world for inspiration,” Gardner says.

But the show’s focus is on textiles of the Bauhaus, and by artists trained by Bauhaus teachers and alumni, many of whom — like Albers — moved to the United States, where they continued to teach.

Works include a 1924 wall hanging by Gunta Stolzl, the only female master at the Bauhaus school.

Gardner points out that while some artists chose weaving as their specialty, others, particularly women, were sometimes consigned to it while preferring painting or other media.

“In these cases, they really made the best of it, and made lemonade out of lemons,” he says. Until recently, their works were only featured as backdrops to works by other Bauhaus artists, a reflection of the relative lack of respect shown to weaving as an art form.

The show also follows the story of fiber arts through its artisanal and industrial iterations, showing that many artists pursued both tracks at once.

Textile artists broke barriers between craft and art by creating sculptural pieces, such as Magdalena Abakanowicz’s enormous, wall-size “Yellow Abakan” (1967-68). Also featured is Ed Rossbach’s delicate raffia and lace basket (1973); Aurelia Munoz’s huge “Brown Eagle” (1973), a sculptural piece of macrame of hand-died sisal and yarn; and another Rossbach work, “Slip Cover for a Computer” (1969), made of plastic sandwich bags heat-bonded together so they visually echo the Bauhaus weaving nearby.

MoMA’s new configuration includes many interdisciplinary galleries, and the museum plans to rotate certain works every six months. Exhibit organizers encourage visitors to use this exhibit as a starting point before taking in other textiles featured on nearly every floor of the museum.