This homeland of mine

An exhibition of artworks in mixed media on paper exploring the idea of a home through the eyes of a woman. 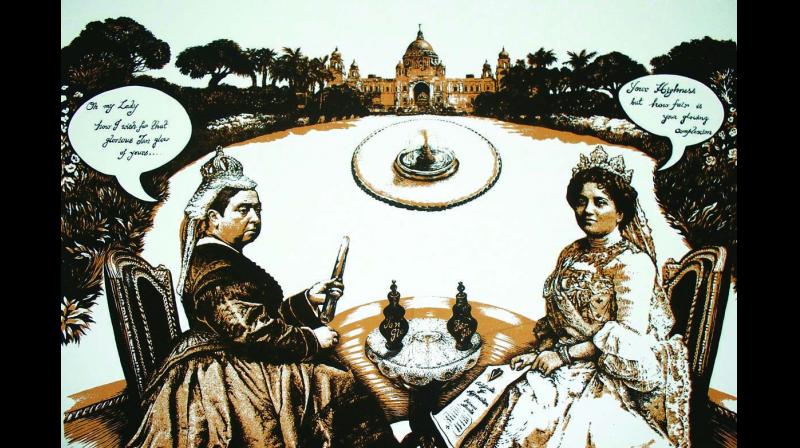 After a long day, every person goes to this place called home. But ever wondered what is a home? Is just a building or a feeling or is it an amalgam of both?

In order to understand the meaning of home, an exhibition titled ‘The Homeland’ was recently organised at the India International Centre exhibiting the works by Moutushi Chakraborty. The exhibition showcases her artworks — that comprise of the mixed medium on paper.

Speaking to the artist, she reveals that the works on display explore the idea of home from a feminine perspective wherein home is not only physical but metaphysical idea where the family has to migrate (whether forcefully or by choice) as well. She continues, “It is the dismantling and setting up of living spaces with beloved ones or alone. It is the idea of a home that wherever the body stands, the roots are
planted.”

The works on display are a narration of her experiences as a woman and several other women. Her works project the idea of how a human’s first home is not some building with a roof but the womb of a woman. “From the experiences of motherhood, I felt that the first home that we identify ourselves with is the womb that starts even before we breathe. Migration also happens even there because eventually, the child has to be perched out to live,” she expresses.

In one of her artworks, she uses a sonogram that doubles up as the image of the milky way and if one studies both the images, there is a similarity between the two as both posses the dark spaces with light coming in.

Her works involve the use of mixed medium on the canvas where she uses photographs, collage work which has been painted and printed on. She also uses elements like cloth, threads and beads as well. The aurat series involves the use of the paper pulp technique, cotton pulp and thread as well. On the experience of working with paper pulp, she comments, “The creation begins from when the paper is being made. It is like creating a narration as in when the paper is formed.”

One of the noteworthy experiences of the show, Memoirs as letters, she questions the identity of the female on the background of the written text. She adds, “Every image represents the lives of women from different stages which essentially speak of their bodies as a home that they experience life around them.”

Her works bring about a sense of security and a feeling of calmness when looked upon to which, she comments, “It is the experiences I have lived and shared from other people in this journey. It speaks of the feminine aspect of nesting along with the idea of accepting reality.”

“There are many dark situations like forced migrations, partitions etc but life persists beyond all those negatives. I highlight the building aspect of life rather than the aspect of ‘why this happened’ and wrongdoings,” she expresses and concludes that her works are a “celebration of life as they come.”