A river runs through it

The 90-minute dance drama traces the Ganga’s journey from its mythological origin till date. 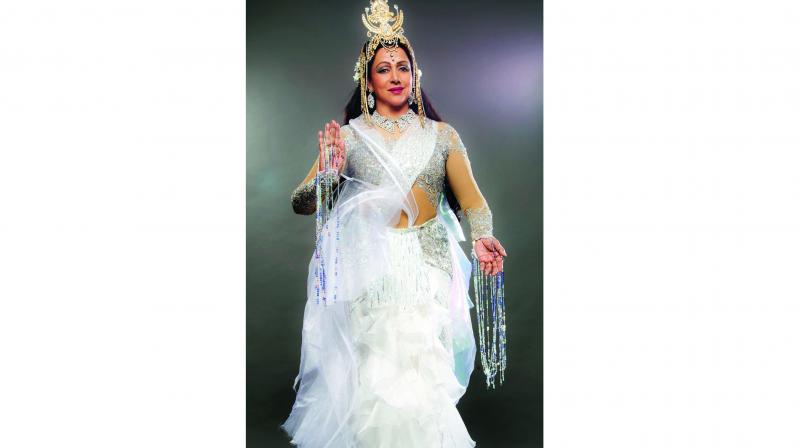 The gorgeous Malini and her team from Natyavihar Kala Kendra presented her ballet in presence of external affairs minister Sushma Swaraj, chief minister of Uttar Pradesh Yogi Adityanath and thousands of ministers and international delegates. The 90-minute dance drama traces the Ganga’s journey from its mythological origin till date.

The four-part show was choreographed by Bhushan Lakandri, its music composed by Padmashree Ravindra Jain, Asit Desai and his son, Alaap Desai, and the songs rendered by Suresh Wadkar, Kavita Krishnamurthy, Shankar Mahadevan and Mika Singh. The pretty costumes were designed by Neeta Lulla, and special effects were by Vibhore Khandelwal. It was directed by Malini.

Dressed in sparking white and silver outfit, Malini narrated the age-old story of India’s holiest river. The storyline included the birth of Ganga, her purpose of descending to the earth, stories from the Ramayana and the Mahabharata and finally, the fraught topic of Swachh Ganga and pollution.

Mythical maiden
The divine Ganga is the one who emerged from the feet of Vishnu in Vaikunthlok. Vishnu’s sleep is constantly disturbed by frantic calls of despair emanating from the distant human world. He reveals to Ganga that the voice belongs to none other than Bhagirath, a prince seeking her descent on earth to help his ancestors attain salvation. But Ganga who has always resided at the lotus feet of Vishnu is unwilling. Vishnu nevertheless asks her to oblige and depart on her mission to cleanse the world. Reluctantly, Ganga leaves, but in her youthful abandon she gushes thunderously forth, coursing her way through the Himalayas. At the behest of Vishnu, Brahma tries his utmost to contain her flow, by trying to confine in her in his Kamandal. He fails as Ganga flows away nonchalantly. But Lord Shiva who is in deep penance in his abode, Mount Kailash, sensing her arrival, arrests her in his dreadlocks. Ganga tries to break free but to no avail. Brahma then appears and appeals to Shiva to let her continue her journey. Shiva untangles a single lock of hair and releases Ganga. Ganga is enchanted at the sight of the mighty Shiva and mesmerised by his beauty. But Shiva blesses her and affectionately directs her to set off on her way. Thus ends the adventures of Ganga in the godly world.

Salvation queen
Meanwhile on Earth, King Himvant is eagerly awaiting the arrival of Ganga. He welcomes her and accepts her as his child. Mother Earth is overjoyed and all of nature welcomes Ganga into its fold. Bhagirath is satisfied. He reminds her of the reason for her advent and leads her on a mission of granting salvation to the souls of his ancestors. Ganga obliges. Once this mission is fulfilled Ganga is now ready to head back to Vaikunth. But Mother Earth implores her to stay longer. Venerable sages and common people come together to beseech Ganga.

Mother of Bhisma
Ganga’s stay on Earth begins and she is now a witness to life in the mortal world. She witnesses many yugas and the great lives associated with each yuga—Harishchandra in Satyug, Ram in Treta and Krishna in Dwapar. She also encounters King Shantanu to whom she loses her heart and in due course they accept each other in a conditional matrimony. This results in the birth of Bhisma. In the same era, Krishna has taken birth. The era ends in the great war of Mahabharata. Ganga is shattered when she witnesses the death of Bhisma. But the era is marked by victory of righteousness over evil.

Ganga continues to flow through centuries fulfilling her duties and witnessing Buddha, Mahavir, Shankaracharya and Guru Nanak Dev. These noble souls help alleviating the sufferings of the people.

History unfolds with the narration of sporadic episodes of foreign invaders like the Turks, Khiljis, Lodhi and Mughals who are hell bent on destroying the cultural ethos of Indian society. Then comes the era of the British raj. The Sepoy Mutiny brings forth the bravery of Mangal Pandey who rebels against the tyranny of British rule leading to the freedom of India on August 15, 1947.

Surviving pollution
Since Independence, Ganga is under an onslaught borne of human selfishness and greed. She is enraged. She can no longer stem the decline of life on earth caused by mankind. Enraged, Ganga threatens to leave the planet, but is touched by the heartfelt prayers and pleas of people who care for their world. She is touched by the prayers of little children who are yet to experience this beautiful world. So she decides to stay back to help the planet. Ganga forgives all those who did not treat her well and resolves to maintain her purity for the sake of the people. The yuga of Kali has to end. The dance ends to the soul-stirring sounds of the great Ganga aarti.

After the show, Ms Swaraj said, “I don’t have words to describe Hema Maliniji’s performance which I saw for the first time in my life. I am taking three words from a famous television show to express my feelings about it; adbhut, avishvasniya and akalpaniya (wonderful, unbelievable and unimaginable).

Talking about Ganga, Malini said, “Ganga had always been my dream project. But I had lost hope when music director Padmashree Ravindra Jainji passed away. In fact, when Ravindraji fell sick he suggested I should record a few songs on Ganga and keep them. I did record a few tracks which Esha and Ahana performed as solo item numbers in shows. But for a full-fledged dance ballet I was looking for someone who would appreciate the subject. That’s when popular music director Ashit Desai came on board.”

Malini informed that she was in search of a new choreographer for the show as Bhushan Lakandri had decided to relocate from Mumbai “but then I insisted and asked Bhushanji to come back for the sake of Ganga. He has been with me since my first ballet Ramayan three decades ago. He knows what I want in terms of steps and movements. I am so glad that he did.”

Malini now plans to take her new baby to every major city of India and to a few international destinations. She wishes to spread the vital and significant message of the mythology as well as let the world know about the need to clean this mighty river for the sake of our own lives.

Sandip Soparrkar holds a doctorate in world mythology folklore, is a World Book Record holder, a well-known ballroom dancer and a Bollywood choreographer who has three National Excellence Awards and one National Achievement Award
under his belt. He can be contacted at sandipsoparrkar06@gmail.com