The origins of Bishnupriya Manipuris cover quite a gamut of theories. 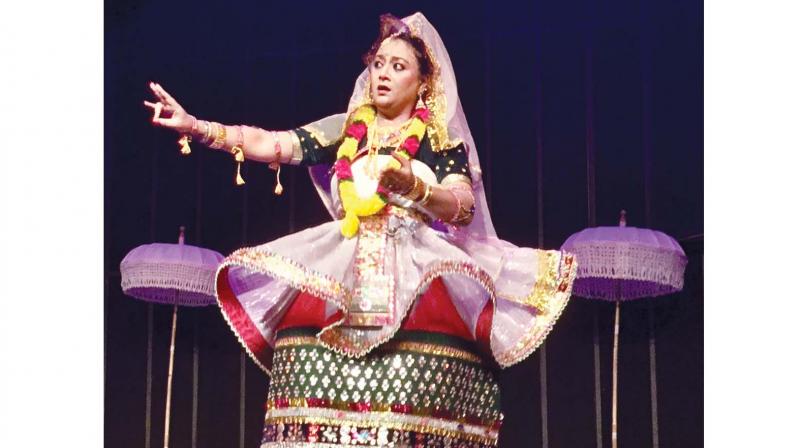 Urmimala Das hails from Assam and was trained by Guru Bulu Sinha and Guru Shri Shashi Kumar Sinha of Assam which puts her squarely in the Bishnupuri garana of Manipuri dance.

Among the greatest joys of my life has been the opportunity to access the depth and diversity of a small number of of the cultures of northeast India. Traveling across Assam from Gauhati to Tezpur visiting Sattriya, theatre and dance centres in the 1970’s as well as studying pre and post Vaisnavite dance traditions of Manipur with legendary gurus in Manipur has fed the flame of an interest dating back 50 years ago to college days in the USA.

With this background, it was a very special pleasure to see two fine Manipuri performances recently, one by Urmimala Das at the India Habitat Centre in New Delhi and the other in Mumbai, the 2nd Guru Padmashri Th. Babu Singh National Dance Festival held in Mumbai.

Urmimala Das hails from Assam and was trained by Guru Bulu Sinha and Guru Shri Shashi Kumar Sinha of Assam which puts her squarely in the Bishnupuri garana of Manipuri dance. For those of us not from the northeast, awareness of the Vishnupriya Manipuris of Tripura and Assam is likely a bit fuzzy. Their name stems from the fact that they were already worshippers of Vishnu before the time of King Bhagyachandra who was converted along with his people in the 18th century and, among other accomplishments, invented the Ras Lila dance.

The origins of Bishnupriya Manipuris cover quite a gamut of theories. One is that they are Indo-Aryan royal descendants from the time of the Arjuna’s sojourn in Manipur during the era of the Mahabharata. Another origin could be of Khasis mixing culture and language living among the Bodo and Asura peoples in the plains of Kamrup around Bishnupur (city of Vishnu) who came to be known as Khalachais and speaking a language distinct from the Meitei language.

Some of the Bishnupriya Manipuri believed that they migrated from around Thailand when Buddhism started dominating Hinduism and that the Vishnu statue in Bishnupur was actually brought by them from Thailand. Other scholars believe they are descendants of sixty five Bengali families who migrated to Manipur during the reign of King Gharib Nowaz (Prambeiba) in the second part of eighteenth century. Another scholarly opinion is that they are simply the descendants of those Meitei people who left Manipur in massive numbers during the 19th century Manipur-Burmese wars and took shelter in Cachar (Assam), Sylhet (Bangladesh) and Tripura towards the beginning of 19th century.

The relevance of all this is to put in context the variations of Manipuri Jagoi traditions we see on the stage today. In Manipur itself, people are very conscious of deviations as well as developments of the legacies of the three great gurus of the early and mid 20th century, Guru Amubi Singh, Guru Haobam Atomba Singh and Guru Amudon Sharma.

Just as a general audience might have no consciousness of the differences in Kathak between Lucknow, Jaipur and Benares garanas or in Bharatanatyam banis between Mellatur,  Pandanallur, Vazhuvoor, Mysore and Mysore, so too the differences between the Manipuri of the Sangeet Natak Akademi’s Jawaharlal Nehru Manipur Dance Academy and that practiced by Bishnupriya Manipuris in Assam and Tripura, the Tagore Manipuri of Santiniketan and the bani of Guru Bipin Singh cultivated in Mumbai and Kolkata.

Just as with other classical dance traditions of India, we should respect and celebrate all the garanas/banis/schools of Manipuri alongside our personal preferences. When King Bahagyachandra created the Ras Lila drawing on the movement aesthetics of older Lai Haroba ritual dances, the language used was the Bengali of the Vaisnavite missionaries who converted him. By the end of the 20th century, much of this was translated to Meitei. Jayadeva’s Sanskrit Geeta Govinda is a staple of Manipuri Jagoi and you may well hear Maithili, Bribhasha and other languages interpreting poetry of Vidyapati, Chandidas, Govindadas and Gyandas among others.

Urmimala Das’s Manipuri program entitled Bhavana, which brought together two Assamese dancers of different styles in collaboration, won my appreciation on several levels. Both dancers, Urmimala Das in Manipuri, and Hemanta Kumar Kalita in Kathak, do their state proud in having mastered the aesthetics as well as techniques of these classical dance traditions while infusing their performances with their individual stamps.

Urmimala’s over thirty years of dance experience was evident as she offered us a performance of high standards in technique, abhinaya and overall aesthetics in a Radha Abhisarika, Jayadeva’s Yahi Madhava kandita nayakas ashtapadi, a Krishna Abhisarika.

The unusual duet of Manipuri and Kathak conceptualized and choreographed by Hemanta Kumar Kalita was a beautiful and evocative presentation. Urmimala’s Manipuri Radha sees Hemanta’s Kathak Krishna in her dreams. As Krishna pivots in and out of her peripheral vision, seemly at her side, there and not there, her sringar bhakti reminded me of Mirabai.  The emotions and choreography were balanced delicately and I hope this lovely composition will be shared with wider audiences.  Between the Radha-Krishna items of Bhavana were well performed Dhol cholom,  Kambha-Thobi Lai Haroba folk dance, the  Thang-ta sword and spear martial arts as well as Chei Khatpa sticks balancing act. Manipuri artists Chetna, Ibochou Singh, Shart Singh, Dangamba Moirangtham gave accomplished performances of these traditional items and Urmimala’s daughter Harshita got good stage practice as part of the team.

The fact that Manipuri dance encompasses several traditions besides Raslila, presenting a variety show is understandable to hold the general public’s attention, but I look forward to a time when this isn’t necessary.

Sangeet Natak Akademi awardee, Guru Thingbaijam Babu Singh spent years in close association with Guru Amubi Singh as a disciple and assistant and was considered a rightful heir to his guru’s art. He directed Manipuri Jagoi Marup, Imphal from 1970 till 1982 when he became Principal and Pradhan Guru at Jawaharlal Nehru Manipur Dance Academy, Imphal. Apart from teaching, preserving, and extending Guru Amubi Singh’s work, he contributed a number of choreographies and dance- dramas of his own as well as publishing several books. The festival honored three generations of his family and disciples with performances worth traveling to Mumbai to see. I cannot recall seeing such nuanced, sophisticated and engaging Manipuri choreographies presented in “forever”.

Sangeet Natak Akademi Awardee Guru Amusana Devi herself was trained under gurus M. Amubi Singh, Th. Tarunkumar Singh, Th. Babu Singh and Th. Suryamukhi Devi. During her career in dance spanning more than four decades, she has choreographed many dance-dramas, played major roles in about forty dance-dramas of JNMDA and has travelled widely abroad. As current Senior Production Assistant at the JNMDA, Imphal I wish more audiences around India could see her in performance.

Similarly, Smt P. Reepa Devi, also from Imphal, gave a memorable and elegant visualization of Guru Th. Abu Singh’s choreography interpreting Ritu, the seasons, in Manipuri movement and bhava.  Smt Latasana Devi from Mumbai is a bubbly and enthusiastic ambassador of Manipuri dance with decades of sadana for the art in Mumbai and Kolkata as well as Imphal. Her performance was a pleasure, as was Sudip Kumar Ghosh’s Krishna composition also by Guru Th. Babu Singh and that of Kumari Varsha Vishwanathan form Palghar, trained by Sudip.

I wish you had seen the richness of the choreographies of Guru Th. Babu Singh, performed in the presence of the guru’s daughter by family and disciples, in an auditorium near you. If you love the arts, you owe it yourself to delve into connecting to the aesthetics and philosophies, complex tala system and sophisticated techniques of Manipuri as performed by all the banis of this tradition that lives still in an unbroken temple tradition as well as on stage.