Giving voice to silence of images

When Ravi Dhingra, a photographer whose heart is in the right place for exploring photography as an art form is concerned. 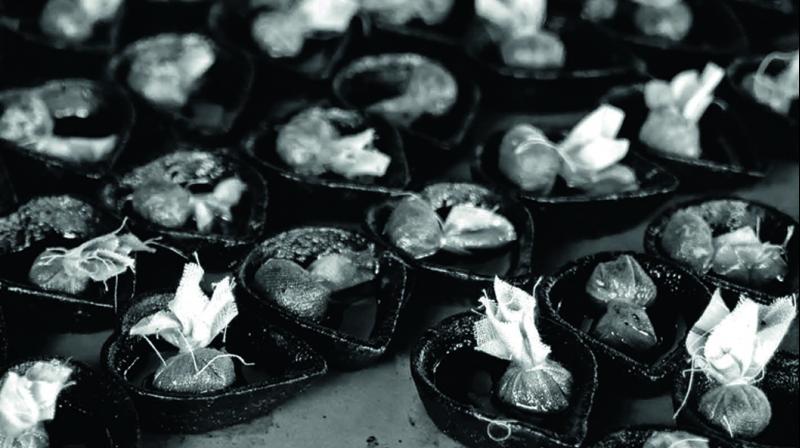 Artworks at Frozen in a Pause exhibition

One word that I have used unabashedly in the context of photography and cameras is “ubiquitous”. I dislike the word intensely. Just as I dislike the disservice artists do to their art by turning photographers. Both as a curator and artist I find it damages them in the long run.

Let me explain why I feel so strongly — but then I feel strongly about most arts! When artists take pictures, they unknowingly switch off their mental inbuilt view finder, be it when capturing a person or a situation or landscape, their preoccupation with getting the best picture becomes paramount. And that “view” is lost from memory. And what is memory? To my understanding memory is something you create – like a strand of fact that you take and add drops of emotions to it like layers wrapping themselves in an oyster on a grain of sand to create a pearl.

The photograph is a static entity. Memory isn’t. The biggest problem starts when artists try to create a painting from a photograph. It always falls flat as far as I am concerned. Artists invariably end of “copying” the picture and in that pre-occupation to be true to the photographic image, forget to add their own perspective to the proceedings.

The reason I am pontificating about this photograph-painting connect is because at some level they are entwined in contemporary times. I feel in these trigger happy times when everyone with a mobile phone camera feels like a photographer, photography which is such a powerful and beautiful form of art in itself is increasingly getting diluted. The fact is its independent art status is unquestioned and if anything, it needs to be acknowledged thus.

So when Ravi Dhingra, a photographer whose heart is in the right place for exploring photography as an art form is concerned, has an exhibition, it needs to be certainly noticed.

According to Ravi, “My photographs are marked by the sensitivity to finding beauty in mundane objects centred on the acceptance of transience and imperfection. I attempt to bring out emotions associated with every-day subjects that range from a state of happiness to dejection. The intent is to engage the viewer with my photographs and emotions.”

He and Dolly Singh, the poet, have also collaborated on a book to be brought out on the occasion. Called Frozen in a Pause, I loved the concept for the simple reason that the pause in the context of time is ultimately nothing but here and now. Be it the animate or the inanimate, from the past to the future, from the yesterday to the tomorrow, it is today and right now that is the pause. In a way it also the drama that is played on the stage of time.  And Ravi has frozen these moments or interludes of time in a very lyrical manner. And that it what elevates his craft from the realm of mere craft to the art.

And Dolly’s poetic words complete the picture both actually and metaphorically. The typewriter font they have used across the entire book adds to the timelessness of the feel of the book. She says candidly, “this book beautifully combines the two arts of photography and poetry is a tribute to creativity, art and expression.

Ravi’s artwork is a spur for me to find expression in words. At the same time, the poetry part has attempted to give voice to the silence of his images.”

Just to quote one: Pause Have you ever been stilled? Actions caught, and Suspended in mid-air!You would knowWhat it is like to beFrozen in a pause.Pauses are deep, and hollowWhere silence broodsAnd memories played in Grey interludes.
Call it me penchant for black and white photography if you will, but the sheer lyrical element of the images and the words were a deadly, heady concoction.