Additionally, there is also a sense of nation-building and going back to the roots in these paintings. 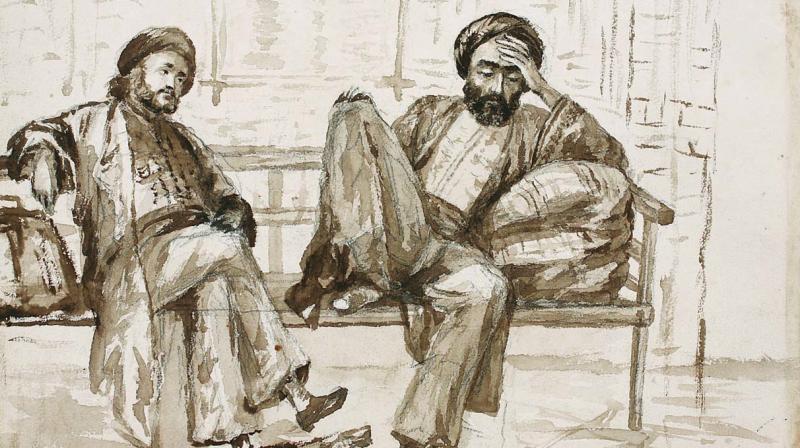 If the earthy and the mineral colour palette of Jamini Roy didn’t send you to the humble land of his native Bengal, his simple and deeply folk-rooted aesthetical rendition of a dancer will. In 1972, along with Jamini, eight other India’s celebrated and revered Modern artists were deemed ‘National Treasure’ by the Indira Gandhi-led government under the The Antiquities and Art Treasures Act.  The law, which had sought to restrict the export of the artwork and antiquities, is still debatable whether it really helped in curbing the export of the artworks. But, the implication was certainly to give a degree of respect to the artists. Bringing to the Bay, for the first time, Delhi Art Gallery (DAG), is exhibiting their collection of the nine artists called Navratna, at Dr. Bhau Daji Lad Museum.

Our very own National Treasure includes the artwork by Raja Ravi Varma, Amrita Sher-Gil, Rabindranath Tagore, Gaganendranath Tagore, Abanindranath Tagore, Nandalal Bose, Jamini Roy, Nicholas Roerich, and Sailoz Mukherjee. For Kishore Singh, President and Head of Exhibitions and Publications at DAG and the curator of the exhibition, the aim of displaying the collection goes beyond just presenting the work of the artists, but also to understand the cohesion that binds their work. He says,  “It is an opportunity for us to bring all these artists together and show them in a cohesive form, and when you look at them put all together, you also understand the underlined context and thread which may have been reason why these particular artists were selected in the 1970s and nominated as the National Treasure artists.”

While the collection boasts of the Modernism movement in India (largely 20th century), works of each artist reflect his/her own array of style. While you will find yourself viewing the extreme expressionist and melancholic paintings by Rabindranath Tagore, there would also be works by Amrita Sher-Gil in her extreme primitive romanticism.  One walks amidst diversity, and as Kishore puts it, “there is nothing that visually holds them together, which is at one level very exciting because you look, enjoy and challenge the diversity.”

But amidst such overwhelming works, there is a common thread that unites the artists. Although Kishore explains that there is no definite way to propound it, “one common thing that kind of denotes and creates a sense of identity around them is the whole idea of identity— creating an identity of the self, of the people, and of the nation at a particular point in its history.” He explains that Raja Ravi Verma, the oldest among the group, with his realistic way of art making style gave for the first time a pan-Indian identity to our Indian heroes, heroines, historical and mythological figures.” Before that, you had no idea what Sita, Shakuntala or even Damayanti looked like. This man visualised it and created a sense of image and created paintings and also inexpensive prints.

These prints travelled into the prayer rooms. So, the images that your grandparents must have looked at, which your parents look at, what you look at and the coming generation would look at, they have created the first sense of identity maker. So he is visualising it in a certain sense of cohesive identity of the Indian people.”

Additionally, there is also a sense of nation-building and going back to the roots in these paintings. “You look at some of the others and you get a sense of nation-building which was happening in Bengal at the time, which is why a number of artists are from Bengal. The idea of Bharat Mata, and of going back to your roots, is again the question of identity, but some implemented it through art like the Bengal School of Artists, and some did it by actually looking at their subjects and context,” he says. Whether it was just a landscape or scenes of daily life, the subject became much more vibrant and much more rooted into every day and the life which  is built around it.

It was also the time when Mahatma Gandhi had called for taking pride in going back to our roots, and Kishore believes that it appealed to the spirit of some of the artists. “So, Nicholas Roerich who comes in from the West goes into the mountains in Naggar, and lives there for 19 years. Nandalal Bose goes into the countryside as well, and through them, you start moving to the rural and the countryside.” Therefore, the collection, which also includes one of the only two sculptures made by Amrita Sher-Gil, echoes not only an artist’ s individual growth, but also is reflective of many movements that were happening in India.

“So when you start looking at these markers, you will see how the issue of identity has united them somewhere, and we have tried to depict in this exhibition. So from Jamini Roy, you learnt how to paint in the western style that moves into the folk vernacular. The subjects become every day again, the stories, the legends, the performers, so that’s the visual story that I am talking about,” Kishore concludes.

The exhibition is ongoing till November 11 at Dr. Bhau Daji Lad Museum.