A dance performance that asks, ‘How fictitious is a border actually?’

Boundaries and borders are front and centre in our own lives as well as for countless refugees. 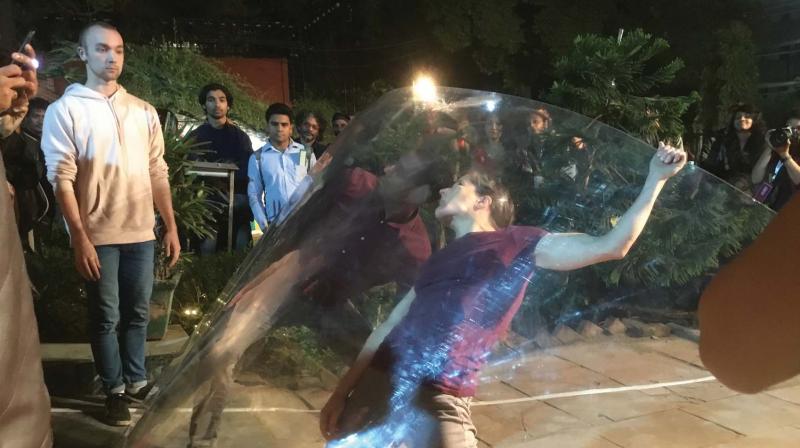 We are Waiting at the Border: Dutch Vloeistof Dance Company

Thought provoking dance performance art rises to a new level when our own kinetic sensibilities are engaged. This is definitely what happened to the audience attending, which meant participating in the recent Dutch Vloeistof Dance Company production of We are Waiting at the Border.

Opening the second day of the well-curated Natya Ballet Dance Festival, the audience gathered outside the Sangeet Natak Academi Meghdoot theatre was first directed to “Follow the lady with the pink sign” and then stand and sit behind a rope line facing an expanse of lawn. Immediately a group dynamic was created within the need to adjust into moving to accommodate others. Mylar mirror panels moved into and through the space strategically concluding with sprawling legs evocatively appearing below, reflected above on panels that then backed out, around and behind the audience. Borders raised and broken down.

Boundaries and borders are front and centre in our own lives as well as for countless refugees from Syria, Yemen, Burma and South America among others. We are Waiting at the Border asks the question “How fictitious is a border actually?”

A bewildered and partially willing audience was then tightly packed into a square, soon demarcated with taped borders and challenged with a huge glass plate held by dancers first pressing in on them and then falling back, crushed by the transparent glass themselves, one of them self-identified as a Dutch citizen from one of its former colonies.

Moving to a final public space, we first saw the dancers walk, stop, tilt back and then release in movements down, sideward or around as they covered the field. Exploring new ways to break boundaries, break down thinking patterns and focus on the unexpected aspects of “borders”, we saw visions of reflective panels on top of a supine dancer then three joined panels moving directly towards the audience border and suddenly boxing in a dancer.

I loved a classic modern dance exercise evolved into profound communication as a dancer flails with partners touching the space perimeters though not the body itself, effectively limiting and compressing the failing into nothingness, The compressing continues even after the compressed has left. Finally the four dancers move into the sections of the standing audience to dance intimately in the small circles forming around them.

I was struck by the resonance with performances of Paradise Now by Julian Beck’s The Living Theatre in the 1960’s where performers moved through the audience saying “I can’t travel without a passport” in many emotional overtones and finally leading the audience out into the street as if lighting a spark of public action and demonstration. This Dutch production elegantly brought this humanistic aspiration of lives allowed to breathe across artificial boundaries into our present context.

Challenging other borders of aesthetics and cultural heritage, Aham Sita, a Bharatnatyam-based theatre production by Director Gowri Ramanarayana with Priyadarsini Govind was Sita’s compelling backward view of her life. It was a tribute to Gowri Ramnarayan’s consummate skill in blending dance, music and the spoken word to create a script and interplay that was kept us engaged as we revisit familiar questions of the treatment of women in the Ramayana.

Sita considers the request from Ram to send the heirs he now needs back to court, apparently now accepting paternity though his denial of it which sent her into exile. He also requires her at his side for the horse sacrifice, but demands an oath in open court from her post accepting her sons. Equal to Ram in archery, Sita has reared her sons well and now contemplates their eagerness to leave for court.

Gowri eloquently narrates the voices of crucial moments in Sita’s life while creating vignettes of four other women of the epic interspersed with Priyadarsini’s powerfully expressive bhava. We meet Urmila, also Janaki, daughter of King Janak ruefully in her second class status, abandoned for 14 years by Lakshman, who only married her in pride of marrying his brother’s sister-in-law.

Meenakshi, now Surpanakha, speaks of the racism and misogyny of the Aryan heros who disfigure a dark complexioned, feisty woman who is called promiscuous for not being afraid of her sexuality and mocked for her love. We meet Mandodari at the battlefield, recalling Ravana’s request to her father, Maya, King of the Underworld to make her his chief wife. She considered Sita an unequal creature but was terrified of the strength of her refusal and despaired of Ravana’s disregard for her warning that Sita was a gem on a cobra’s head.

We all know of Sita’s strength and resolve. Cheated, her love endures but not her trust. The image of a river showing the other bank is invoked by the artists with reference to the girl child poisoned in the womb, the woman thrown into a fire, Ahalya and other lives turned into stone and the resolve to cross the river and create a new rajya.

Mahabharata, with no strings attached, was the Kathkatha Puppet Arts Trust opening night re-telling of the epic, combining puppetry and theatre arts of shadow theatre, Japanese Bunraku mask technique and movement elements of Chhau and Kalripayattu. The past and present motivations of fifteen of the epic’s characters were explored in a masterful production designed and directed by Anurupa Roy. It received a standing ovation and I look forward to its repeat performance in Delhi as soon as possible.

Last, but not least, a beautifully crafted experimental work based on Kathak dance was directed by a famous Dutch director, Leo Spreksel and performed by Bangalore based Noopur Performing Art Centre, headed by Hari & Chethana who are on deputation to the Netherlands by the Indian Embassy and working as resident artists with the Korzo Theatre. Ayush was inspired by Ayurveda philosophy and explored the three doshas of the body and their constant balance and imbalance, strength and weakness. It was a graceful and well designed presentation.