The many colours of Krishna and his musing flute 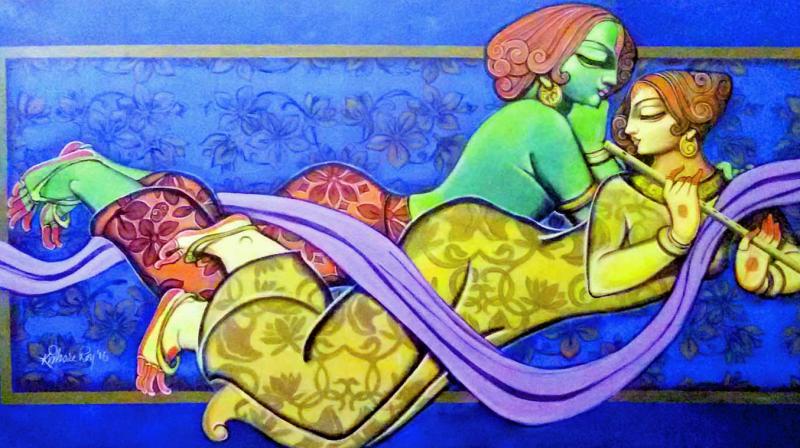 For the past 10 years, artist Kishore Roy’s paintings are all about Krishna and his raas leela with gopis and Radha.

Artist Kishore Roy’s love affair with Krishna started very early when he used to see his mother offering prayers to “Balgopal”. However, while studying art in Kolkata, he saw an American artist painting the Blue God in various colours. This provided an impetus for Roy to bring the Vishnu avatar alive on canvas. And for the past 10 years, Roy’s paintings are all about Krishna and his raas leela with gopis and Radha. “I was so impressed with the American artist’s work and thought that if a foreigner can understand a Hindu God why can’t I as an artist understand him… and this quest drew me closer to Lord Krishna”, says Roy.

Roy’s current art show is named “Magic Melody: Song of Love”, where he will be showcasing his artworks at Lalit Kala Akademi, Mandi House, New Delhi from January 9 to January 15. Just like Lord Vishnu’s reincarnation as Krishna to establish the path of dharma and universal love, Roy’s paintings, acrylic on canvas, is an attempt to show the divine and eternal love. “I have tried to emphasise the playfulness of Krishna in my paintings”, says Roy.

The figurative artworks rightly narrate the mischievous character of Lord Krishna. One of his works show Krishna with a flute in blue while Radha and other gopis are in a trance. Different motifs are imprinted on the bodies of gopis and Radha. Another painting shows Krishna in sea green with Radha both having flute in their hands. Yet another artwork shows Lord Vishnu in the background and Krishna in the front symbolising Vishnu, the preserver, taking the Krishna avatar. Shlokas of the Bhagavad Gita run on the margins.

Roy seems to have read a lot of scriptures before embarking on this love voyage. Another work shows Krishna in solitude, lost in the music of love he himself has set tune to, with lotus blooming in the background. My favourite is wherein Krishna is painted in yellow with his back with two gopis looking at him. The motifs depicted on their bodies is probably that of Sudama, Krishna’s childhood friend from Gurukul. 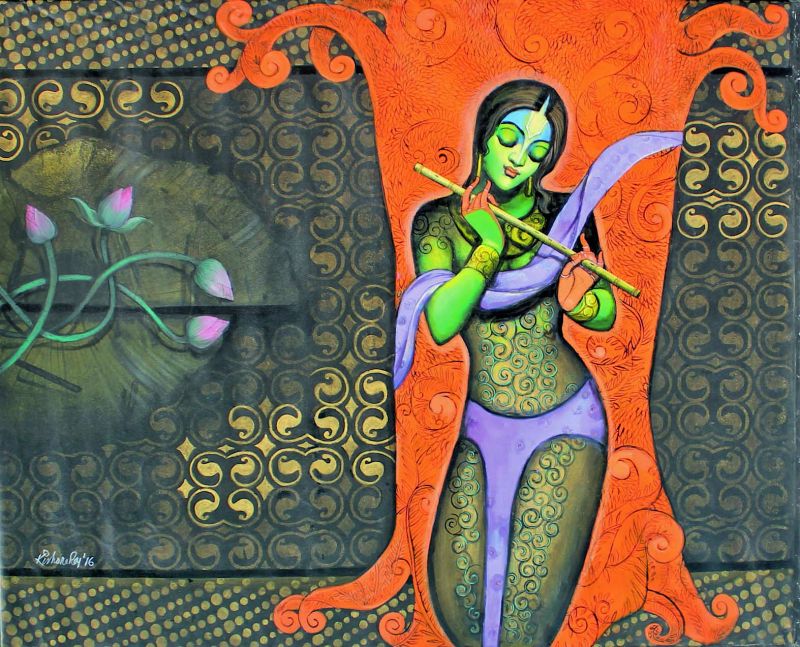 One has to give it to Roy’s creativity and use of colour and imagination. His ability to bring so many variations and versions to one theme is commendable. His paintings are easy on the eyes despite use of bright colours, which also are in perfect harmony with the character of Krishna. Roy’s Krishna has moods, in one painting he’s reclining and smiling almost acknowledging the effect his flute is having on the gopis, while in another he is in a reflective mood.

Roy’s Krishna has a soft, feminine-like quality — the softness of divine love, which Roy wants to portray. “I paint in solitude, no one’s allowed in my studio and I rarely venture out or go to a party. I need calmness and concentration to lend that smooth feminine touch to Krishna”, says Roy. Krishna is also colourful as he also dances with the gopis like a kid.

The artworks shown have a surreal quality about them; the paintings are somewhere between real and abstract. “Figures cannot be realistic, while Krishna is from our mythological texts, it needs imagination, that’s why I have not restricted him only to blue. I have used green, amber yellow and brown as well”, elucidates Roy. Playfulness is not a philosophy; it is a dance of energy and love. Love for life. Krishna preaches universal love, peace and the path of dharma. Roy’s paintings also do the same.

The theme is rooted in ancient scriptures but the work is modern. Roy’s paintings are simple, relatable and easy to understand. Like Krishna, it has a playful yet calming affect on the viewers. Simply dynamic.