Paying homage to Shiva, king of dancers, with performances in different traditions

The festival of Maha Shivaratri becomes an especially auspicious occasion for many dancers to pay homage to the Lord of Dance. 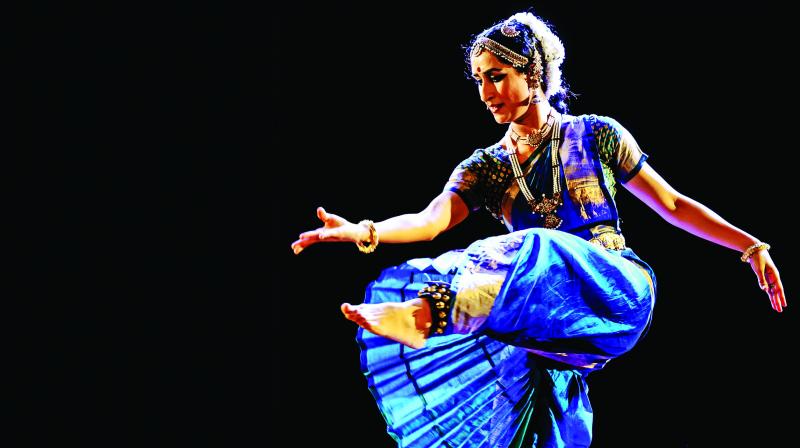 Amrita Lahiri: The best dancer of all. (Photo: Vinay Jain)

One of the greatest motifs of all time is that of Shiva as Nataraja (the king of dance) whose theatre is the entire cosmos. The iconic representation as a metaphor for the entire cycle of cosmic activity comprising creation, sustenance and destruction, has inspired a great deal of dance imagery in India. Nataraja’s dance is not triggered by a special reason. It just is, since the universe is in a perpetual state of motion. The festival of Maha Shivaratri becomes an especially auspicious occasion for many dancers to pay homage to the Lord of Dance. At Natya Tarangini, the dance institution of Raja/Radha and Kaushalya Reddy, Shivaratri (since the last three years) has taken the form of a night-long aradhana, which goes on till the wee hours of the morning, the venue being the Raja Radha Rangmanch, the open air performance space with galleried seating in the recently constructed premises in Pushpa Vihar.

While having solo performances representing different dance traditions is a good idea, what made for a slightly uneven blend of fare was the mix of live and recorded music. Starting with taped music was Odissi dancer Swapnokalpa Dasgupta, groomed under various teachers from Giridhar Nayak to Kelucharan Mohapatra. Now she is under the training of Paushali Mukherjee and Sujata Mohapatra. Fitting the occasion, the dancer selected the Ardhanariswara composition choreographed by Guru Kelucharan Mohapata in the year 1977 for his principal disciple, Sanjukta Panigrahi, with Raghunath Panigrahi chipping in with the music composition and vocal accompaniment. Based on the famous verses “Champeya Gauranga…” expressing the complementing contrasts between Shiva and Parvati enshrined in one identity as Ardhanariswara, the dancer adequately brought out the tandav/lasya counterpoints like Parvati’s “dhammila” hairdo against Shiva with his matted locks (jatadhara). After this the nritta item was the pallavi in bageshri, in which Guru Kelucharan’s dance composition starts off with a brisk “Tajhamta tari jham ta jham ta jham” starting unlike most of his pallavis which, commencing with sensuous, slow movements proceed with the tempo gradually accelerating. The concluding Gita Govinda Ashtapadi “Sakhiye keshi mathanam udaram” for a Maha Shivaratri occasion seemed out of place in the portrayal of abhisarika Radha expressing her deep desire for Krishna, recapturing with the sakhi her ecstatic moments of initial intimacy with him.

The dancer of the evening was undoubtedly Amrita Lahiri, her Kuchipudi recital exuding a sense of immediacy, with a most competent live melodic support. Trained under many gurus like Swapna Nagajyoti, Anuradha Nehru (in the States) and Swapnasundari, Amrita has been for the last few years under the guidance of Jaikishor Moselakanti. With an excellent singer in Sridhar Vasudevan accompanied by Raghavendra Prasad on violin and supported by Manohar providing percussion support on the mridangam, the junior and less experienced Nattuvangam got somewhat camouflaged. Most aesthetically costumed, Amrita’s sprightly entrance was with a composition of Othukadu Venkatasubbaiyer “Jatadhara Shankara Deva Deva” set to todi, as the invocatory homage to Shiva. The lively performance brought out the imagery associated with Lord Shiva and Ganga in his matted locks, as the great dancer of Chidambaram and the dweller of Kailashagiri with Uma or Girija by his side. Very appropriately, the entire recital was woven round Shiva. The next central composition on Shiva followed by the tarangam, a ragamalika, was choreographed by the dancer’s Guru, Moselakanti. Amrita’s own introduction was to the point and lucid. The choreography began with a dance narrative based on Bhagiratha’s prayers to Brahma, for the waters of the Ganga to flow from the heavenly abode down to earth, to wash over the bones and ashes of his predecessors so that they could attain salvation. Brahma grants the boon with Shiva agreeing to take on the initial ferocious force of the descending waters on his matted locks. Very conscious of her own power, which she believes no force can withstand, an arrogant Ganga flows down, only to be contained and held captive in Shiva’s locks. The next sequence pertained to the five cosmic elements: air, water, fire, ether or akash, and prithvi (earth) contained in and represented in the persona of Shiva. Following this, performed with great involvement were passages depicting the epithets of Shiva like “umapati”, “pannagabhooshanam”, “trinetram”, “mukundapriyam”, etc — all portrayed with the combined skill of nritta and abhinaya with the concluding “anandanatanavinoda” emphasising the ecstatic splendour of the Lord’s dance. And the perfect visualisation of this was the tarangam footwork virtuosity with the dancer standing with feet planted on the rim of a brass plate. In one teermanam link between interpretative passages, when the nattuvangam could not find the necessary flow, the dancer, in complete control indicated through her graceful sign language that the segment be repeated, and so it was. Altogether a very fine recital! The dancer had one more item on Shiva, which had to be cancelled with organiser, Kaushalya Reddy, ruling it out for this would stretch the recital beyond the time slot prescribed for every dancer.

The last of the dance part of the evening, before the famed dhrupad duo, Pt. Rajan and Pt. Sajan Misra, took over for the finale, was a kathak duet by Hari and Chethana, artistic directors of Nupur, in Bengaluru. With their neat technique and stage presence, the husband and wife team was well balanced, their synchronised moves pleasing to watch. But one wishes they had designed the recital with greater sagacity, making the main Shiva item which was well choreographed, a starting point instead of presenting it at the end of a programme, with the usual Radha/Krishna thematic concerns — which on this occasion, became redundant. The entire problem lay in the recorded music, which for an open-ended dance form like kathak, becomes too tailored, losing out on improvisation. The beginning was with a Krishna Karnaamritam Bilwamangala verse. The teental nritta and sargam with Shivanjali would have made a fine combination. Swati Tirunal’s composition “Chaliya Kunjanamo” in Brindavan Saranga, with a kavit included in the choreography seemed, for this critic, more of the same thing, too often seen in kathak. Shiva as the ultimate liberator, in his macro formless presence as “Paramjyoti” and “Swayamjyoti” made for a good finish.

Taking the stage at the Stein Auditorium of the Habitat, Sudeep Chakraborthy, a disciple of Jayakishen Maharaj, earlier trained under Pranab Sanyal and Sandip Mallick, showed promise of a good future, given the right opportunities for evolving. The competent musical team with tablist Mohit Gangani and Pakhawaj played by Ashish Gangani had Mahendra Songram as vocalist. Providing tuneful accompaniment and lehra refrain on the sarangi was Azeem Ali Khan. The solo percussion interventions by both drummers were excellent. Gifted with a stage presence, Sudeep has anga shuddha and holds himself well. That he evinced the confidence to dance in an open-ended recital, holding his own against polished percussionists was a statement in itself. The fact that he is having pakhawaj lessons under Ravishankar Upadhyaye gives his feel for laya that special edge. Still carrying the flavour of Shivratri, on the day after, the dancer’s invocation was with “Bhasma bhusan anga Shiva, gale shobit mundmala” set to raga Jog in chautaa.

l. He continued with the 12 matra chautaal for the nritta section, with a starting upaj and laya baant, the improvisations woven into the tala cycle neatly executed. Then followed all the intra-forms of thaat, angik uthan, paran amad, ginti tihai, revolving round the number six, and tukras pertaining to tisra, chatusra and misra combinations, all characterised by neat chakkars and footwork. There was also a parmelu with its mixed syllables. But dancers must develop a grater feel for sound balancing. With the drums much too loud, not a word of the singer could be made out and the dancer’s forays to the mike for parhant with a very muffled sound made hearing very difficult. Also, the dancer seems to have a mannerism of hands constantly ruffling his short hair — which he would be well advised to get over. A sahitya line “Balma mori tori sang laagli preet”, the dancer’s minimal accommodation of the interpretative, expressing love’s deep desire, though fleeting, gave a hint of a talent for emoting which few male dancers have. Sudeep should try and develop this talent for abhinaya, which is even otherwise having such a minimal presence in the kathak of today. The drut section went on to teental presenting an udaan, harimirchi ki paran and gat nikas in which the dancer’s gait was less important than hands showing playing instruments like the flute, the pakhawaj, the sarangi and the manjira. His jawab/sawal with the percussionists was confidently executed. The dancer has all the ingredients needed for a kathak performer — which he has to develop and evolve. What started off with a pitifully small audience gradually saw more people coming in. But the general apathy makes a sad commentary on audience responses in general.