Regaling ballads of kings and queens

The rest have been painted by the scions of the Joshi family Kalyan and Gopal Joshi over last two years. 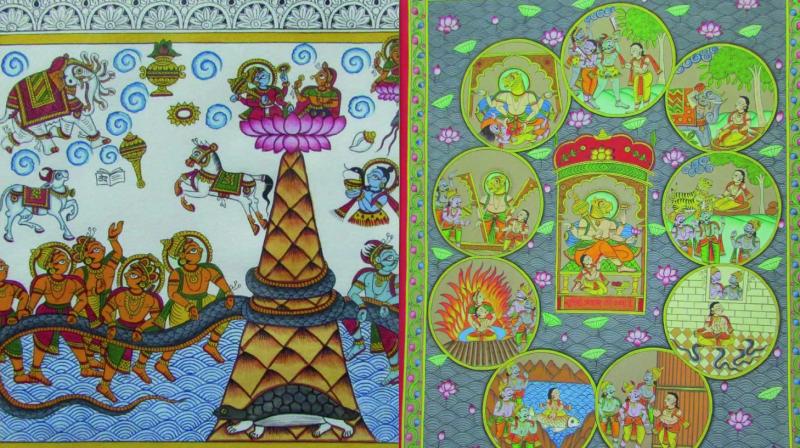 Two Phad paintings created by the Bhopas. There are set colours for specifics of the phad. Orange hues are used on limbs, yellow for ornaments and red for royal clothing. flags and blue for water and curtains.

The Bhopa,  is a singer-performer who  carries painted Phads, horizontal scrolls of hand painted images of local deities and uses them as mobile temples of folk deities.

As daylight fades and quiet descends, the golden sands of Rajasthan glisten in the silvery moonlight, the plaintive sounds of the ravanhatha act as a veritable magnet and the trickle of the audience starts to wind their way from the mud homes to where the Bhopa beckons with his ghungroos and the peculiar clicking sounds he makes to announce his arrival. The ghungat clad Bhopi stands with a small mashal in hand ready to hold the light up to the large painted phad, as they start singing to regale the audiences with the tales of the mythical King Pabuji...

The Bhopa, belonging to the nomadic Rabari tribe, is a singer-performer who traditionally carries the painted Phads – horizontal scrolls of hand painted images of local deities and uses them as mobile temples of folk deities.

Drawing from a rich repository of folklore, he, along with his wife the Bhopi, brings the Phad alive enacting the scene depicted in it while playing the ravanhatha, a stringed instrument, the bow of it has a few ghungroos tied to it and make a rhythmic sound as they match the tala of the ghungroos on the Bhopa’s ankles. In keeping with the part of the phad’s story that he is singing, the bhopi’s mashal holds the light up to highlight it, literally.

Delhi based arts organisation Art Tree, supported by the Yes Bank’s culture initiative, and brought to the capital an art show of these rarely seen Phad paintings. Titled Phad:Mythical Heritage of Bhilwara, the show included nearly 50 Phad paintings, two of which were rare originals created nearly six decades ago by Bhilwara’s illustrious Phad artist Shrilal Joshi, who was also honoured with the Padmashri award. The rest have been painted by the scions of the Joshi family Kalyan and Gopal Joshi over last two years.

According to Pragati Agarwal, founder, Art Tree and curator of the show, “Phad is a traditional art form, more than seven hundred years old from the Shahpura region of Rajasthan, known not only for its vibrant colours, but also the fact that it is accompanied by an oral tradition of rendering the gatha(folklore).

The Bhopa and Bhopi – priest and his wife from the Rabari tribe, perform this rendition. The singing is about the gods, about the heroics of either the local deity Pabuji or Devnarayanji revered by the Gujjar community of camel herders. The Phads, painted like horizontal scrolls using natural colours, also portray folklores, scenes from the Ramayana, and other mythological narratives along with the main narrative.”

Says Mr Kalyan Joshi: “Creating a Phad is an act of devotion even as it is an art form. We commence our work with a prayer.  Hand woven cloth is soaked overnight so that the threads get thicker. It is then starched and further burnished for a smooth and shiny surface. Then the Phad painter draws the entire narrative spanning the life of the deity and his divine deeds on this canvas. The figures are rounded, dressed in traditional attire and headgear in bright colours. The colours used to be painstakingly extracted from natural sources stones, flowers, herbs.” 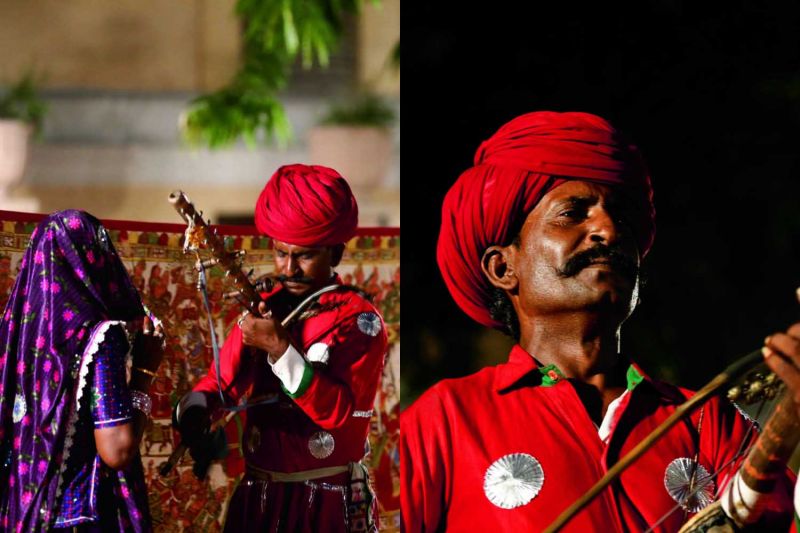 The Bhopa, belonging to the nomadic Rabari tribe, performs at an event.

There was a time when the secret of Phad painting was confined to the Joshi family. However, when Mr Shrilal Joshi felt that the art form was on the decline, he felt the need to establish ‘Joshi Kala Kunj’, now ‘Chitrashala’ in 1960 to develop new artists other than the Joshi family.

He took upon himself the task of revitalizing this art, both at national and international level. His sons, Kalyan Joshi and Gopal Joshi have carried forward this legacy and have taken on the mantle of making this art more relevant in today’s times by introducing new themes and techniques but not compromising on the traditional style of the Phad.

Traditionally, the Bhopas commission the Joshi’s to make a phad for them with which they travel and perform. They are mostly called upon to perform in a community if the animals become ill or die. Devotees believe that the phad is a living temple and hence hold it in spiritual reverence.

The Phad is unique in the manner it is formatted and made. There is a set pattern as to how the characters are placed and the colour schemes of Phad too are fixed.

Every available inch of the canvas is crowded with figures. Another highlight is the flat construction of the pictorial space. While the figures are harmoniously distributed all over the area, the scale of figure depends on the social status of the character they represent and the roles they play in the story. Another interesting feature is that the figures in the paintings do not face the audience; rather, they face each other so every figure is in repose.

There are set colours for specifics of the phad. Orange hues are used on limbs or torso of figures, yellow for ornaments and general clothing and designs, green for trees and vegetation, brown for architectural structures, red for royal clothing and flags and blue for water and curtains. An outline of the painting is drawn by the artist with light yellow coloured paint and then fills in the colours appropriately.

The colours are then mixed with gum and water, and painted one colour after the other, in the order of orange, yellow, and so forth. Black is the last colour used for the outlines.

However, traditionally, no gold colour was ever used.  Indigo or neela thotha is often added to the starch to prevent rats and other insects from eating or damaging it. Getting a phad painted is an expensive proposition for a bhopa hence it is looked after very well and usually lasts a lifetime of two generations.

Many old phads either get singed accidentally when holding a mashal in low light visibility by the ghungat clad bhopi or bear burn marks or smoke marks – this is also an indication of their usage and age and if they were actual phads in use.

Thanks to the expense and time factor, most phads are used till as long as possible and abandoned only when they are beyond use. Hence very few old phads survive. I have seen a few and the colours mellowed over time and the touch of loving hands had its own tales to tell...

Dr Alka Raghuvanshi is an art writer, curator and artist and can be contacted onalkaraghuvanshi@yahoo.com