Count community theatre among holiday traditions for many. 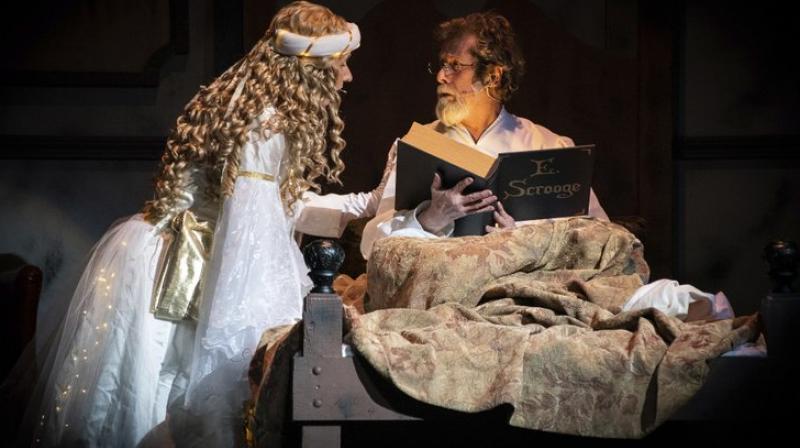 Live entertainment takes you away from reality for a short couple of hours. (Photo: AP)

Washington: The Railsback family in North Carolina enjoys lots of conventional holiday festivities — get-togethers, special meals, exchanging gifts. But for the last several years, they have added another tradition that illustrates the meaning of the season for them: performing in the High Point Community Theatre’s “A Christmas Carol: The Musical.”

“It’s a huge part of our Christmas,” said Kristina Railsback, who has played the role of Mrs. Cratchit since the theater first presented the production five years ago. Her husband, Eric, and sons, Liam, 14, and Caleb, 18, also have taken part every year, either performing onstage or working in the production crew.

She loves that the commitment brings the family together often for rehearsals, and she finds the message of Charles Dickens’ classic tale sets the right tone for the holidays. “It’s such a story of redemption that the Scrooge character has a chance to become a better person — it moves me every single time,” she says.

More than that, she relishes the energy and feeling of kinship produced when people of all ages and backgrounds come together to do something creative. “I look forward to it all year,” she said. Community theater productions take on special meaning at the holidays, agreed Tabi Bryner, who has been directing plays in Hemingford, Nebraska, since 2008. The performances give audience members a way to reconnect with the meaning of the holidays, said Bryner, who studied theater in college and worked as an Equity stage manager for over a decade.

“Live entertainment takes you away from reality for a short couple of hours,” she said, and the holiday-themed plays “help create wonderful memories. We always choose a heartwarming story. Attending the play has become ingrained in the community. It’s what they do.”

Bryner said the performers in her community productions range in age from toddlers to seniors — “It’s what makes the plays so popular,” she said. “Hometown folk acting as though they are paid professionals — they take it very seriously to create great theater. The laughter is hearty and the tears become real from the audience.”

Eleven-year-old Grace Lilley-Gitch has acted in two Hemingford productions, including “The Best Christmas Pageant Ever,” a popular holiday play based a children’s novel. “It’s really good for the community that there’s a holiday play because it’s an event for everybody to go to,” she said. “There’s usually a message about what Christmas is really about and how to be grateful.”

In Grove City, Ohio, Lisa Radwanski says she regularly takes her family to see friends perform in the holiday shows put on at the Little Theatre Off Broadway. Past performances have included “The Twelve Daze of Christmas,” a comedy based on the Christmas carol and”’Twas The Night Before Christmas,” which retells the classic poem with the focus on a mouse and a reindeer. “It is fun to watch children we know on stage, and see them grow up more each year,” she said. “We leave the productions happier and filled with Christmas spirit.”

And in St. Paul, the Minnesota Jewish Theatre Company launched a holiday show in 2000. Initially, the intended audience was Jewish families, but the annual production, which uses both paid actors and community volunteers, has become a holiday tradition for people of many faiths, said Katie Howells, manager of communications and audience engagement. “It’s just really grown,” she said.

The theatre, which sometimes commissions playwrights to create shows based on Jewish children’s literature, looks for themes that promote cultural unity and help educate the community about Jewish traditions, while setting the mood for Hanukkah, she said. This year, the troupe will perform “Hanukkah Lights in the Big Sky,” a commissioned work based on the true story of a community in Billings, Montana, that rallied around its Jewish neighbours after a brick was thrown at a menorah in a child’s window.

The theatre offers low-priced student tickets and encourages schools to attend as a field trip. “It feels really important to me to provide this opportunity for young people — a lot of whom have never been to the theatre — to come and learn and enjoy,” said Barbara Brooks, producing artistic director.

At one rehearsal every year, she serves potato latkes to the cast and crew. “There are always people who say, ‘I’ve never had them.’ So it’s kind of fun,” she said.