Reinventing the wheel in art

Interestingly, both the times Sharpoonji Pallonji come to the creative rescue and financed the big budget productions. 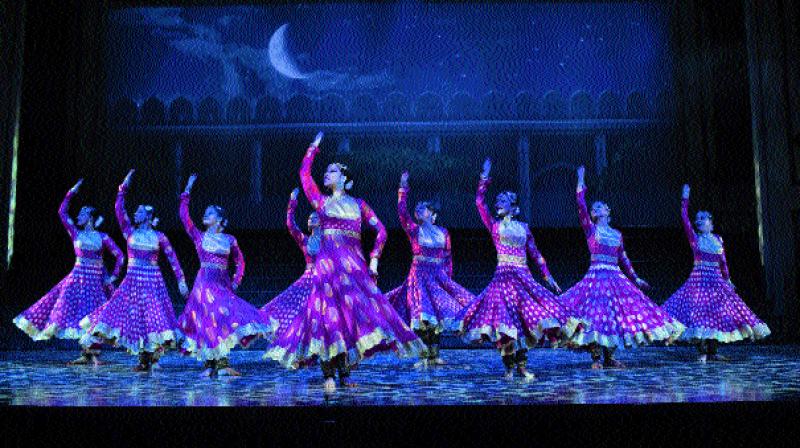 Mughal-e-Azam being performed on stage

Playing with a classic is always fraught with danger. For one there are enough people who have seen it and prefer to live with the image that exists in their mind and for another, reinventing the wheel doesn’t always work. I say that about so-called innovations too – first excel in what exists then go looking for innovations. I find this especially true in the context of classical dance and music. But having said that, there would be no progress in this world if we all just followed tradition, so actually, it is all about tightrope walking – in life as in art.

In this context I am looking forward to the three-day Prastaar festival by the Gandharva Mahavidyalaya from September 15 to 17 at Kamani Auditorium that focuses on extending dance by understanding sahitya, music and choreography through a common text that they must include in their repertoire. In a way it is like an inward extension for each of the six dancers they will put on board.

The piece itself demands an artistic extension — sanchari — in its delineation. The piece is from Subhashitavali 1049 Shringarapadhhati compiled by Vallabhadeva, 15th century. It goes like this:

“Do not go,” I could say; but this is inauspicious “All right go,” is a loveless thing to say “Stay with me,” is imperious “Do as you wish” suggests cold indifference And if I say “I’ll die when you are gone,” you might or might not believe me Teach me beloved, what I ought to say When you go away.

It is a very carefully chosen festival and the two dancers whose performances I am looking forward to are Arushi Mudgal (Odissi) and Purvadhanashree (Vilasini Natyam) for these two have always extended creative frontiers with their interpretations and sheer excellence of their dance. The other dancers include Bhavajan Kumar, Snjukta Sinha, Navia Natrajan, Monisa Nayak.

To come back to reinventing the wheel theory, this week I saw a spectacle Mughal-e-Azam that will stay in my mind for many things considering we have all sighed and shared Madhubala’s anguish as she sang “Mohabaat ki jhooti kahani pe roeye…” and felt suitably rebellious when we got caught as teenagers and the song “Pyar kiya toh darna kya…” played in our heads when the parents found out or when unrequited love wounded us it were the immortal words Teri mehfil mein kismet azmaa ke hum bhi dekheinge mouthed by Nigar Sultana that acted as a balm and gave us courage…

K. Asif’s epic was released in 1960 after being nine years in the making has been an all-time favourite of several generations. Its plot revolves around Prince Salim’s love for Anarkali that impels him to rebel against his father Emperor Akbar.

The powerful drama around this confrontation interspersed with haunting songs, dialogues and dance numbers, the film cost 10 times more than other films made at the time. Its dialogues by Kamal Amrohi, Wajahat Mirza and lyrics by Shakeel Badayuni are fabulous examples of literary writing as is the music by Naushad. Of course Lata Mangeshkar and Shamshad Begum’s voices cast their spell to make the film into a perfect example of magic that can be woven on the silver screen.

Cut to 2017. Feroz Abbas Khan makes the film into a musical play and pulls off the drama like a dream come true. He didn’t try to reinvent the wheel but went with the same lyrics, more or less the same music, dialogues and yet managed to create the impact of a new production. Everything about the play is on grand scale.

The vast stage, the fast changing grandiose sets, the powerful voice of the actors singing live, the Manish Malhotra costumes, the choreography and thankfully the Urdu diction, they have got everything right – down to the red carpet in the auditorium. Even the extremely helpful and attentive ushers seem hand picked to give you an experience that you will remember for a long time.

Interestingly, both the times Sharpoonji Pallonji come to the creative rescue and financed the big budget productions.

I love the thought that comes with its continuity for creative support for I know what an uphill struggle it is to get sponsorship for any kind of arts and hence the back patting.  May there be many more such supporters of the arts.

I for one am someone who has been smitten by musicals on Broadway and in London and been mesmerised by the magic unfolding in foot-tapping music, and happy to report that in no way did our home-grown musical lag behind — how could it considering it has Bollywood for inspiration and Bollywoodwalas to make it no less than the celluloid dreams they weave. It was an unusual venue — the Jawaharlal Nehru indoor stadium so for those sitting at the back visibility would have been a factor but I suppose it can’t be helped when the spectacle is the thing. In a way the play took a leaf out of Parsi theatre with its songs and dialogues in Urdu and quick changing and stunning sets and held everyone enthral.