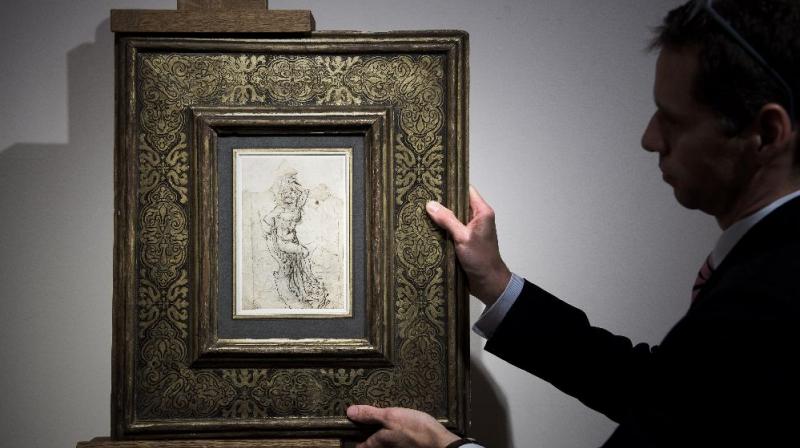 The lost painting was found in the papers of a French provincial doctor (Photo:AFP)

Paris: A lost drawing by the Renaissance master Leonardo da Vinci has been discovered in the papers of a French provincial doctor, a Paris auction house said Tuesday.

The dreamily sensual sketch of Saint Sebastian is thought to be worth around 15 million euros ($15.8 million) and is an "extraordinary discovery", the Tajan auction house said.

It has been authenticated by the French specialist Patrick de Bayser and Carmen C. Bambach, curator of Renaissance drawings at New York's Metropolitan Museum and a Da Vinci expert, it added.

The dramatic study, which it is thought Leonardo did in his late twenties or early thirties after he was acquitted of sodomy, is one of eight he is known to have drawn.

The find is extremely rare, with the last Da Vinci drawing that came to market -- a sketch of a horse and rider -- equalling the world record for an Old Master drawing when it sold for $10 million in 2001.

It was then said to be the most significant drawing by the artist and polymath to be sold at auction since the 1930s.

De Bayser told AFP he came across the new sketch, done with a quill pen, during a routine trawl through material sent to the auction house for valuation.

He thought it was possibly by a 15th-century Florentine artist until he turned the torn paper over.

On the back he found a couple of scientific sketches about an optical experiment showing the shadow thrown by a candle and some "spectacular" back-to-front writing.

Da Vinci regularly used the technique so his writing could only be read using a mirror.

De Bayser then noticed that the shading in the drawing of Saint Sebastian, which showed the martyr with wild hair pinned to a tree trunk, went from right to left.

"That meant that it was drawn by a left-handed artist" like Da Vinci.

"I was immediately convinced it was by Leonardo," he told AFP.

It is now thought the sketch may have come from one of the artist's famous notebooks.

Two other studies of Saint Sebastian by Da Vinci have survived, one at the Bonnat-Helleu Museum in Bayonne in southwestern France and the other at the Kunsthalle in Hamburg.

Carmen C. Bambach believes the newly discovered sketch came from the same period as the Hamburg drawing, from between 1478 and 1483.