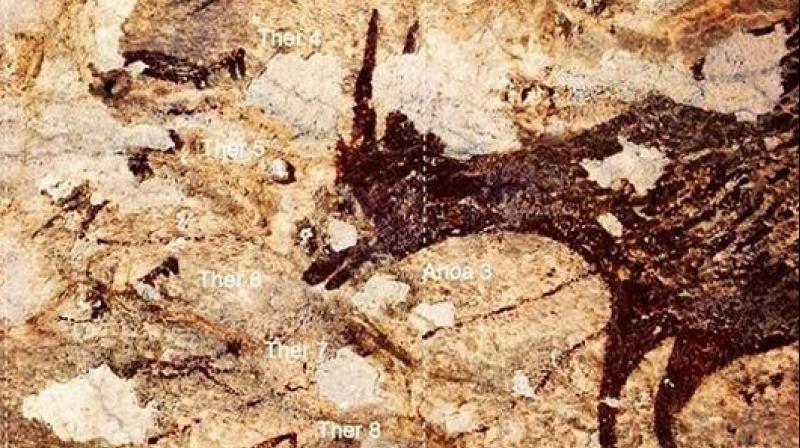 Cave art in Sulawesi was first discovered in the 1950s, with at least 242 caves and shelters containing such imagery documented since. (Photo: Instagram)

Jakarta: A cave painting found on Indonesia’s island of Sulawesi, depicting human-like figures hunting animals, appears to be the earliest known pictorial record of story-telling, according to a study by a team of Australian and Indonesian researchers.

The painting, found in a limestone cave in 2017, was dated to nearly 44,000 years ago using uranium-series analysis, they said in the study published on Wednesday in the journal Nature.

It shows eight therianthropes, or humans with animal characteristics, appearing to chase and kill six animals such as the warty pigs native to the island, using what seem to be spears and ropes.

“The portrayal of multiple hunters confronting at least two separate prey species possibly suggests a game drive, a communal hunt in which animals are indiscriminately flushed from cover and directed towards waiting hunters,” the researchers said.

Until now, the oldest rock art showing a character with the characteristics of an animal had been an ivory sculpture found in a cave in Germany. Thought to date back 40,000 years, it depicts a human body attached to a feline-like head.

The Indonesian cave painting also provided some of the earliest evidence of human spirituality, said one of the study’s co-authors, Adam Brumm, an archaeologist at Australia’s Griffith University.

“Therianthropes occur in the folklore or narrative fiction of almost every modern society and they are perceived as gods, spirits, or ancestral beings in many religions worldwide,” he said in a statement.

The research was done in collaboration with Indonesia’s National Research Center for Archaeology, and scientists from culture heritage department of Makassar, the provincial capital.

The Griffith researchers said cave art in Sulawesi was first discovered in the 1950s, with at least 242 caves and shelters containing such imagery documented since.

Some of the caves had sustained damage that could threaten the art, said Indonesian rock art expert Adhi Agus Oktaviana, pointing to threats from salt, dust, peeling, microbes and smoke.

“It would be a tragedy if these exceptionally old artworks should disappear in our own lifetime, but it is happening,” added Oktaviana, who is a Ph.D. student at Griffith.