Artist Bhagyashree Suthar returns to the bay with her second solo show, showcasing more complexity in her work. 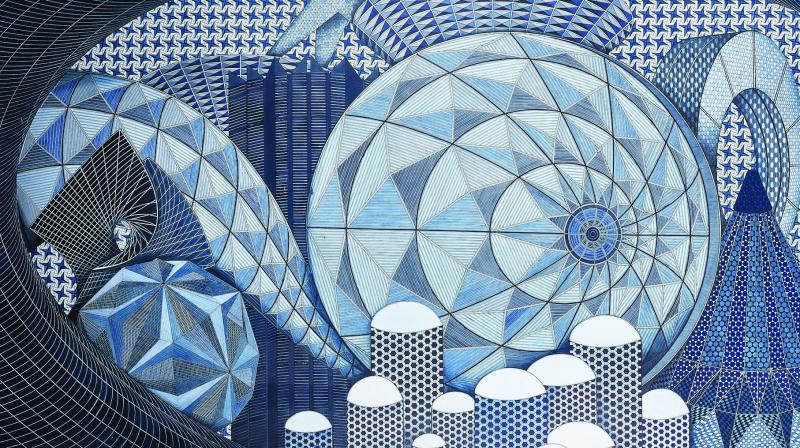 Four years later, Suthar has returned to the coastal city with her second solo show Fields of Eros and Enchantments at a quaint art gallery in Colaba.

In the current batch of contemporary Indian artists, a 28-year-old young artist Bhagyashree Suthar has been making waves with her geometrical paintings and sculptures since her first solo show Fractal Future in Mumbai in 2016. Four years later, Suthar has returned to the coastal city with her second solo show Fields of Eros and Enchantments at a quaint art gallery in Colaba.

With 13 paintings displayed on the walls of Akara Art Gallery, Suthar announces that she is no longer a novice in the art world, but an artist with a penchant for exploration. Known for using a unique material – beeswax in her paintings, this collection sees her making a progression from 2D waxwork to a more complex 3D relief work. In addition to the pigmented beeswax on paper, the collection also sees various paintings with ink and gouache on paper. Revealing how she went a step ahead from her last collection, Suthar says, “In my earlier works, I had used a particular colour palette of brown and black. This time, I wanted to explore with the colours, and so, I have used indigo, crimson, yellow and green colours.”

In Vadodara-artist’s work, one can see a carefully designed composition of intricately made geometrical patterns almost of a meditative quality. Suthar is quick to reveal that in this collection she has used more than 10-12 shapes and 15 patterns in her paintings, which adds to the complexity of the collection.

For the alumni of Maharaja Sayajirao University, architecture has served as one of the biggest inspirations behind her work. Behind the composition of geometrical patterns, there lies an ode to the qualities of precision, rigidity, intricacy, and durability followed in architecture. “Architecture has a very personal connection to me. It is metaphorical to me, I see my own self in the rigidity of the architecture. I want everything to be systematic, and in its place, which is why I relate to it personally and emotionally,” delves Suthar.

In fact, the artist goes a step ahead and establishes a connection between elements of cityscape with the elements of nature.  “For a very long time, architects and artists have referred to nature to design structures and patterns. In my work, I use buildings in the form of rose petals. I am inspired by the mathematical theories like the geometrical Fibonacci sequence that exist in the nature. Nature has that balance. It has everything that one would want a reference for,” she elaborates.

Hence, in a way, the title of her work Fields of Eros and Enchantments itself becomes a clue to how the artist sees the world around her. “My work has a certain sense of Eros, a sense of eroticism in the geometrical forms. You can see the passion in the lines and in the shapes. It’s the lure of geometry that draws one into the world that I have created,” affirms Suthar.

While not afraid to explore further, the artist says that she has now chosen to devote her time to researching more architectural and geometrical patterns. But, she also admits that she still needs to achieve the precision in her waxwork, which she had discovered while experimenting with an encaustic method of paintings during her Masters. “I want to learn how to be more precise in the waxwork. Once I put the wax over the work, it does not stay in the form because it’s too hot. I have to learn how to be more precise even while cutting and scraping since the process is too tedious and intricate,” concludes the artist.

The exhibition is ongoing at Akara Art Gallery till February 22.