It’s play time in the capital

The festival featured various aspects of theatre such as classic, modern and drama. 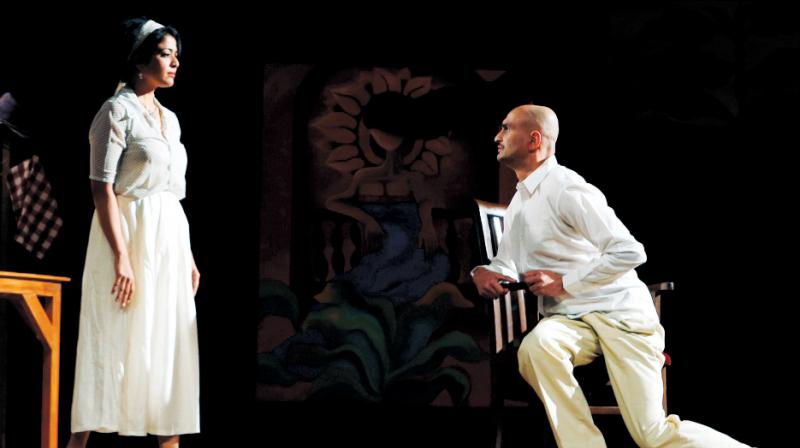 Stills from the plays that were staged at the 19th edition of Bharat Rang Mahotsav in New Delhi.

Amongst the plays I have seen so far in the 12 days that The Bharat Rang Mahotsav has been running, these have been the best ones.

Chekov Chaika, was an adaptation of his play The Seagull. It was staged by the Chekov’s Studio Theatre, Russia. The director, Vladimir Grigorievich Baicher also acts in the play as a commentator and as a scene changer.

The play is deeply personal and intimate. The contradiction presented in the play between Boris Trigorin and Konstantin Treplyov is actually symbolic of Checkov’s struggle of himself and not a clash between the classiest and the pioneer. Both writers are two faces of Chekov.

Arkadina and her lover Trigorin, a famous writer both attend the performance of Konstantin’s new play, who is Arkadina’s son. Arkadina undermines the performance, which upsets her son and more so he is distraught because he failed in front of Nina, who he loves dearly. Soon after Nina is no longer in love with him and falls in love with Trigorin. To Arkadina’s anger, Trigorin also responds to Nina’s feelings and promises to meet her in Moscow. The play ended with Konstantin shooting himself because Nina who comes to visit him is still in love with Trigorin and rejects Konstantin.

The intensity of the actors was to be seen to be believed. They were all very good with Konstantin leading the batch following with Arkadina. In the three acts, the production explores Chekov’s inner world, not in a space created inside a proscenium-arch stage but in a space articulated in the play that is an open-air setting which was very effective.

The play moves indoors into the 21st century in the fourth act and attempts to achieve a sense of continuity and universality of the truth of the contradiction in any creative artist - between the ‘classic’ and the pioneer driven by ‘what could be’ or ‘what should be’.

Anna In The Tropics, was a play brought from Nepal and directed by Shri Deborah Merola, the artistic director of the One World Theatre in Nepal. Written by a Cuban-American playwright, Nilo Cruz and this play also won the 2003 Pulitzer Prize for drama. He became the first Latino to be so honoured.

A poetic drama, Anna in the tropics, is set in 1929 in Ybor city, Florida in a small Cuban-American cigar factory where cigars are still rolled by hand and ‘lectors’ are employed to educated and entertain the workers. A handsome new ‘lector’ reads aloud from Anna Karolina, he unwittingly becomes a catalyst in the lives of his listeners for whom Tolstoy, the tropics and the American dream prove a volatile combination. The two daughters of the owner of the factory, Santiago, fall in love with the lector and he chooses the elder sister who is married to Polomo, who is extremely jealous of the lector. There is a debate between the factory workers and Santiago where the workers rebel against the pay they receive and that they haven’t paid regularly. Santiago is a lax man who has done nothing for the factory which is likely to be closed. The lector comes into play here as he is given a huge salary by Santiago, to read to education the workers as education.

The group presents inter-cultural and social injustice productions, especially plays from South Asia. Registered as a not for profit theatre, in Nepal since it was founded in November 2011. It has produced fourteen Nepal premiers including Arjun’s Dilemma, the first western style Opera produced in Nepal. Yerma in Nepali, In The Red And Brown Water and Sea Gull are some of the plays besides Anna In The Tropics that the group has produced so far. The One World Theatre also does original productions including telling a tale; Kitchen Dramas, based on personal narratives of Nepalese girls and women and the bilingual Nepali Aama.

This play is very interesting for it’s content and style of presentation, which is realistic. The mixed cast of Cuban and Nepalese include Snagam Panta who runs cock fights and is also a factory worker who also plays the rooster in a very lively scene of a cock fight, Kalsang Lama, Rajkumar Pudasiani who plays the husband of Anna’s elder sister. Divya Dev plays the handsome lector who induces love in both the sisters.

Another insteresting play was The Unparalleled Adventures Of One Hans Pfaall directed by Vini Carvalho and Ramon Ayres and performed by Vini Carvalho who is a performer, movement researcher and artistic director of Fool’s Cap Theatre, UK. The story is from Edgar Allan Poe.

Besides being a principal for runner of the ‘art for art’s sake’ Poe was also the architect of the modern short story. The director says that this project was an adapting literature to theatre. The text served as the dramaturgical guide and a corporeal mime was their physical language. Mixing projection, lights, music and movement they sought to devise a piece that crosses artistic and language barriers.

The play is an eternal journey towards happiness and spiritual elevation. They thought about mankind and the legacy of always seeking for a place where they will finally feel complete. They looked at Pfaall’s journey to the moon as their own journey as migrants travelling to an unknown world, going through the physical and emotional challenges.

The use of lit up balloons and the projection by Leonardo Pancione and Ronald Lopes, with video projection by Eloise Carles gave life to the music by Alex Paton. Vini Carvalho was superb as the man who wants to go the moon.

Love and Life the play from Sri Lanka was a delightful experiment in the non-verbal category. The actors on stage wore huge masks throughout the play, and there were fifteen masks for fifteen characters. Three actors were on stage playing fifteen different characters. The play itself is not like a normal drama because in this play, both the actors and the crew backstage are playing equally important roles. Since there are only three actors on stage they change the masks about thirty five times, the crew members not only help them but also maintain the tempo of the play.

This play is about the love and affection between a father and his son. The characters include, mother, father and an insensitive son who goes off and gets married without telling them. In fact he is constantly absent for them.

When the son delivers a son and brings him home to his father, the father is absolutely thrilled and is gazing at his grandson lovingly,  that’s when he realised that how wrong he had been in the past towards his father. The final scene of reconciliation between father and son was very effective. The entire cast was very good with their expressions despite the mask and acted very well.